ANALYSIS: Job Growth Remains Solid, But Workers Are Still Waiting for a Real Jump in Wages 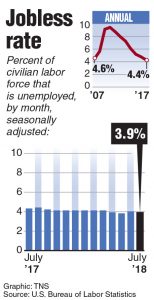 The U.S. labor market remained in solid shape last month, adding 157,000 jobs while the unemployment rate ticked down to 3.9 percent and wage growth improved — although workers are still waiting for significant gains in their purchasing power because prices are also rising.

The July job creation report issued Friday by the Labor Department fell well short of analyst expectations, but figures for May and June were revised upward by 59,000.

That means the economy is still producing strong payroll gains, averaging 215,000 net new jobs a month, the best since 2015. The unemployment rate is near its lowed point since 2000.

At this stage in a record stretch of job growth that began in 2010, however, all eyes are on wages because they’ve been much slower to recover from the Great Recession.

The numbers there looked good in July, with a major caveat.

Average hourly earnings increased by 7 cents, or 0.3 percent, to $27.05. That was an improvement over a 4-cent gain in June. Wages were up 2.7 percent for the 12 months ended July 31, the same annual pace as the previous month and an improvement over the sluggish 2 percent wage gains earlier in the recovery.

President Trump and Republicans have been trumpeting the stronger wage growth as a sign that their policies, particularly the large tax cuts that took effect on Jan. 1, are working.

But they fail to note that prices have been rising along with wages. That means that, after adjusting for inflation, wage growth actually has slowed from its pace in 2015-16.

By one measure, it recently turned negative.

Consider that, while wages are growing at an annual rate of 2.7 percent, the consumer price index for the 12 months ended June 30 was up 2.9 percent. That means the purchasing power of Americans went down during that period.

A broader measure of inflation used by the Federal Reserve, based on total personal consumption expenditures, showed an annual rate of 2.2 percent for the 12 months ended June 30. That means purchasing power has improved, but not by much in the past year.

The Labor Department tracks inflation-adjusted wages — known as real average hourly earnings. That most recent report, in June, showed a 0.1 percent increase in those earnings.

On an annual rate, inflation-adjusted wage growth was flat in June for the second month in a row. Annual wage growth was running about 2 percent in 2015 because inflation was much lower then.

He said recent wage growth was disappointing and the lack of a significant uptick when adjusting for inflation is “a point of tension for many Americans,” even as economic growth boomed to a 4.1 percent annual rate in the second quarter of the year. That was the best since 2014.

“I think the American public’s being misled about the benefits of the tax cut being applied to wage gains where the data just don’t support that,” he said.

Federal Reserve Chairman Jerome H. Powell acknowledged last month during hearings on Capitol Hill that inflation-adjusted wages have been falling, although he said it was a positive sign that nominal wage growth was improving.

“Wages in general have been somewhat slow in moving up,” he told the House Financial Services Committee. “We understand that that really matters to people’s lives a lot.”

Some analysts note that employers are putting more money into healthcare coverage and other benefits, which increases overall worker compensation in ways that don’t show up in wage statistics.

But the Labor Department’s employment cost index, which takes into account wages and benefits, is up only slightly more than wages alone. For the 12 months ended June 30, the index had increased 2.8 percent.