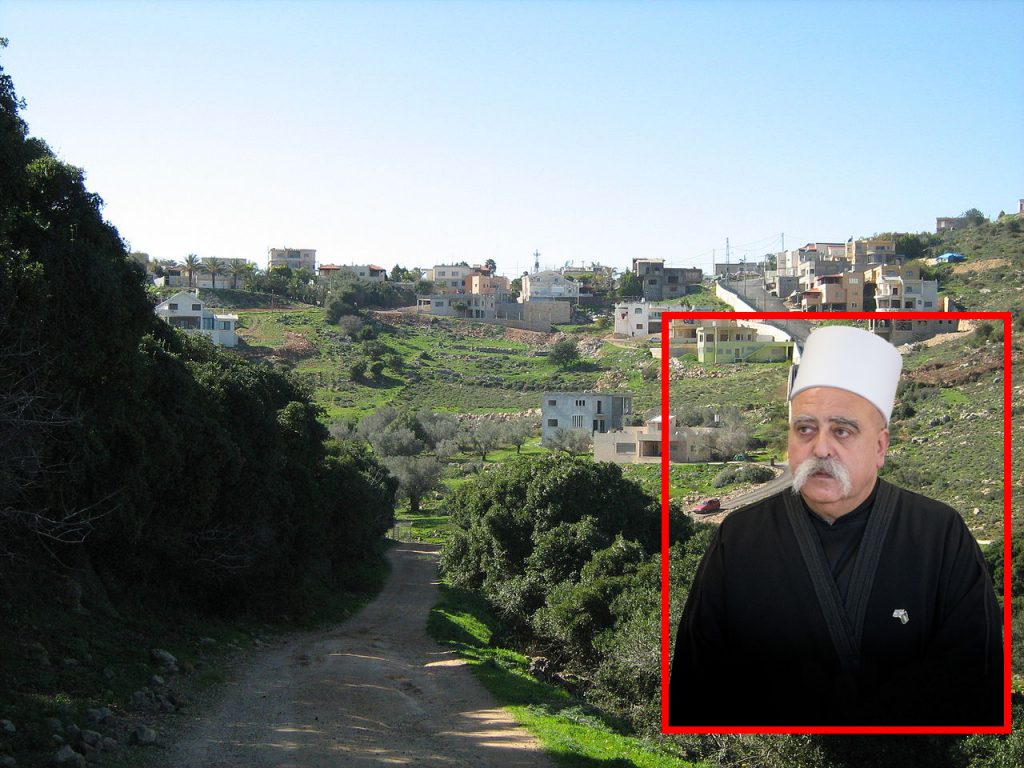 The new Basic Law, known as the Nation-State Law, triggered an unexpected storm of rage among the Druze community, long seen as loyal allies of the Jews. The Druze are concerned that they may have been shunted to the side as second-class citizens.

At the same time, the Druze community faces a difficult struggle in Syria, where the forces of dictator President Assad are approaching the main Druze residential areas — in Horan, Syria — home to some 800,000 Druze. Many of them are concerned that Assad will want to settle accounts with them for not coming to the aid of the Syrian regime during the seven-year rebellion and civil war.

We interviewed Sheikh Moafak Tarif, Spiritual Leader of Israel’s Druze Community, on this matter. He is considered the leader of the international Druze community, is well-versed in both Israeli and global politics, and handles the affairs of the Druze populace wherever they might be.

Are you, as a community leader, more concerned than in the past?

Most definitely, yes. The situation in Syria is worrisome, and especially in southern Syria, where the fighting is intense between different groups. We are not exactly involved in the dispute, but there are those who are trying to drag us in, and this is harmful to our brethren there. We are trying to seek help and protection from whomever we can.

And this is what brought you to hold a meeting with Prime Minister Binyamin Netanyahu and other Israeli leaders. Did you come away encouraged?

We and the Israeli leadership have known each other for many years now, and in fact there exists a brotherly covenant between our peoples. This pact has been strengthened in Israel’s wars, during which we have lost some of our most precious sons who made the ultimate sacrifice on behalf of the Jewish State. In our talk with the Israeli leaders, we presented the picture as we see it, and we raised the two problems that are currently bothering us: the situation in Syria, and the passing of the Nation-State law, which leads many in the Druze community to feel slighted.

Did you return home after the meeting with the sense that Israel is behind you?

Most definitely, yes. I won’t expand on what was promised us regarding the Syrian front. It is not one of those topics that should be talked about publicly, but we know that Israel feels an obligation to ensure that no harm comes to any Druze community in the Middle East. And regarding the Nation-State law, the Prime Minister promised me, and other Druze delegations in recent days, that he would anchor our rights in a rectified law and in any other way.

“We have no national political ambitions,” the Sheikh emphasized, “and we don’t want our own state. But we cannot agree to have our rights harmed in the country in which we live. We want to be equal citizens just like everyone else.”

He added that the ones “who are most incensed in our community are the youth, who feel very connected to the State of Israel and are pained that they are being estranged. They are frustrated and disappointed, because their state, and ours, abandoned them. I told Prime Minister Netanyahu that we ask that our rights be anchored in a law whose subject would be the Ethnic Rights of the Druze Community, and of other minorities — their religious and civil rights. This is what is important to us. We were happy to hear from him that our community is important to him and precious to the Nation of Israel, and he will look for every way to rectify that which was distorted in the present law with regards to us.

Do you have any objections to the fact that the State of Israel is a Jewish State?

Absolutely not. In the end, we are relatives. Speaking to religious people, I would like to remind you that we are descended from Jethro, father-in-law of Moshe. We are proud of the fact that our forefather was not only Moses’ father-in-law, but also the man who gave him the best advice as to how to run the affairs of the People of Israel as they marched in the desert for 40 years. And Moshe accepted his ideas. We never raised any objections to the Jewish character of the Jewish state. We have no problem with the nationality, nor with the Jewishness. And even more than that: I am perhaps the only religious leader in the non-Jewish world to call on his followers to adopt the seven Noahide commandments. I see in this set of commandments one of the most precious and genuine things for the existence of a healthy and honest society. My grandfather, Sheikh Amin Tarif, from whom I inherited the leadership of our community, and in whose shadow I grew up, was the first to foresee the establishment of the State of Israel as a Jewish state. And when he spoke about this before Israel was established, many people were very surprised to hear him talk about something non-existent as if it were happening in front of his eyes. He instructed the community to enlist in the IDF, and the vast majority of our youth indeed served in the army, and some of them in very senior positions.

We have a blood pact with the Jews — not just from today, but way back from the days of Jethro. I very much hope that the religious public, of all sectors, will rise to the occasion and support us.

The Druze – Overview of A Unique Religious and Ethnic Group

In Israel, the Druze have a separate educational system. They live mostly in the Galilee, Carmel and Golan Heights. The Druze in the Galilee and Carmel are Israeli citizens.

The Druze community in Israel speak Hebrew and Arabic, but they are a community distinct from Muslim Arab Israelis. The Druze religion is officially recognized as a separate religious entity, with its own courts and its own spiritual leadership.

In the 1948 War of Independence, many Druze fought alongside the Jews, and in the years that followed, many Druze enlisted voluntarily. In 1956, a law was passed that extended mandatory service in the Israeli army to include all Druze men who are Israeli citizens. The major advocates for this law were Druze leaders, with the idea that military service would gain the support of Israel’s Jewish leadership and would improve their economic and social situation.

As a result of army service, Druze men have risen to high positions both in the military and the Israeli government.

Druze tradition dates back to the 11th century. The Druze see their religion, which broke off from Islam in the 10th century in Egypt, as a new interpretation of Judaism, Christianity and Islam. They regard their ancestor Yisro, father-in-law of Moshe Rabbeinu, as a prophet.

Since just after its founding in the 11th century, the Druze tradition has been officially closed off to outsiders and proselytizing has been prohibited. Since that ban, the Druze population is fueled only by natural growth.

Druze religious structure is made up of initiates (the uqqal, or “knowers”) and juhal (“ignorant ones”). Uqqal men shave their heads and wear white turbans. Women wear white head scarves.

The main tenets of the Druze religion include accepting the Oneness of G-d, speaking the truth, supporting one’s brethren, and submitting to the will of G-d, among other beliefs.

Druze Are Active in Public Life

In 1956, military service became compulsory for Israeli Druze – unlike Israeli Arabs, who are exempt. A survey conducted in 2014-2015 by the Pew Research Center showed that six-in-ten Druze men included in the survey have served (45%) or currently are serving (15%) in the Israeli military. (Druze women are not required to serve.)