Israel ANALYSIS: Sitting on the Fence: The Syrian Druze
Israel 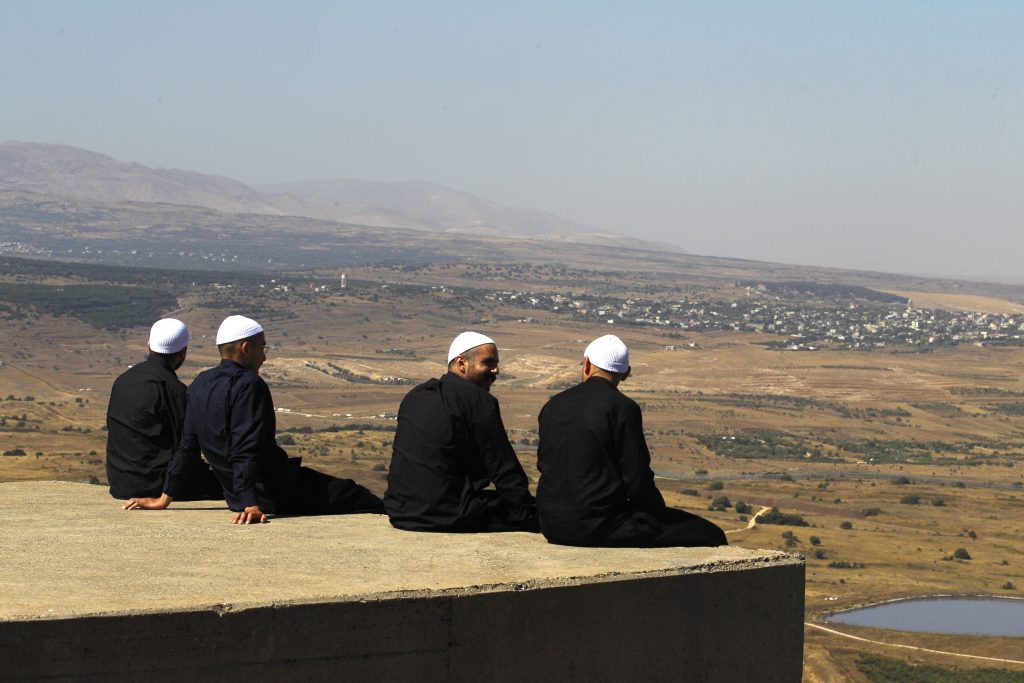 No one talks about it. But it would be a good idea to turn our gaze to Horan, that area in Syria that is home to 800,000 Druze. This week, IS killed a few hundred of them. But that is nothing compared to what Assad’s army plans to do to them if and when it completes the takeover of Syria. The Druze are afraid, and they are already preparing Israel for the possibility that hundreds of thousands of them may reach the Israeli border and attempt to cross it. At the same time, they are already putting their brethren in Israel on alert that they may need to apply pressure on the government to come to their aid.

It would be a good idea for Israel to turn its sights to Horan. That is where the danger is likely to arise for Israel, from nearly a million Druze whom the Syrians now want to settle accounts with — at this final stage of the war in their country.

And Assad has quite a score to settle with the Druze residents of the Golan Heights.

Among the Druze it is accepted that their loyalty is always to the rulers of the state in which they live. The Druze in Israel are loyal to the State of Israel. Many serve in the IDF and in the security forces. There is even a Druze pilot in the IDF. The Druze living in Lebanon are loyal to the Lebanese government, and so forth. Most of the Druze in the Golan Heights are Syrian citizens who have permanent resident status in Israel. As permanent residents, they have access to Israeli schools and municipal services; they often visit family and go to school in Syria. Druze in the Golan are distinct from other Druze communities in Israel.

The Druze who live in Syria were loyal to the regime of Hafez al-Assad, the father of Bashar, and considered him a close relative even though they were Druze and he was an Alawite. They served in the Syrian army under the Syrian draft law. But this was only the case until the rebellion broke out against Bashar Assad seven years ago. When the rebellion broke out, a fierce argument erupted between the Druze in Syria and their leadership as to whether they should join the uprising, which many of the Syrian Druze perceived as a justified cause, and which the leaders prevented them from joining.

A compromise was reached: The Syrian Druze would sit on the fence. They would not get involved, not on the side of the rebels nor on the side of Assad.

The president of Syria took this very hard. He summoned the Druze leadership but was not able to persuade them with sweet talk and incentives. Then he switched tactics and used threats. He demanded that they send their young men to fight in the Syrian army, but they refused. Moreover, all Syrian Druze who reached the age of 18 received orders from their leaders not to report to the draft offices until the state of war in the country ended.

Throughout the past seven years, the Syrian defense ministry has amassed a list of 40,000 young Druze men out of a total of one million Druze in the country who did not report for army service and are considered deserters and lawbreakers. Under Syrian law, especially in emergency circumstances, their punishment is clear.

But Assad has delayed settling accounts with these young men and with the Druze community until the time that he completely takes back his country from the rebels. That time is drawing closer, and thus the Druze in Horan and all over Syria are becoming very afraid.

Over the last week, during the battles to capture the region in the triangle between the borders of Israel, Syria and Jordan — which is under IS control — clashes broke out between IS forces and Druze residents of Horan. It began over nothing, but ended in a series of murderous attacks that IS carried out on the Druze, killing some 300 of them. Dozens were abducted and disappeared.

The conflict between the two sides escalated rapidly, in a matter of days. Assad’s army is not far from there, and it may take advantage of the developments to try and reach the battlefront and make order. But the Druze are no less afraid of the arrival of Assad than they are of IS.

Forty thousand young Druze men who are on the list of deserters are already packed and ready to flee. Where to? The only possibility for them is to try and land on Israel’s borders and exercise the “covenant between brothers” with the Israelis. That is despite the fact that these Druze in Horan, in contrast to their brothers in Israel, joined all the Arab armies that fought against Israel since the War of Independence.

But the threat is mounting. And in Israel, they are secretly preparing for the arrival of tens of thousands of Druze at the border fence in the Golan, which their Israeli Druze brothers will surely try to breach so they can pass. The Druze IDF officers, including several high-ranking ones, are already working behind the scenes for Israel to rally to the aid of the Syrian Druze.

Israel has not yet formulated a strategy to deal with this problem. It needs to hurry and do so before it all comes to a head one fine morning. In the past, there was an idea to mass thousands of Druze along the Syrian side of the border and provide them with day-to-day assistance. But based on the experience of helping the Syrian villagers near the Israeli border, it is not clear that this is a good solution.

Israel will deliberate extensively whether to open its borders to the Druze whose lives are in danger, but ultimately it is not clear that it will not open them, especially under pressure of the Israeli Druze leadership, which has a lot of influence in Israel.

Either way, that “blood covenant” between the State of Israel and the Druze makes it necessary to address the issue and find a reasonable solution for the community that — of all the other sects — has indeed been close to Israel and has forged a certain connection with it. There were aberrations in this connection. But that does not mean that all the rest should be harmed.

It is going to be Israel’s challenge in the next few months, or possibly even in the next few days, as events in Syria progress towards the completion of Assad’s takeover of all of southern Syria. Israel will face a dilemma over whether to provide weapons to the community so that they can defend themselves in Horan, if Israel doesn’t come to their assistance, and if Israel doesn’t actually have to take action on the ground over there. The Druze will ask Israel to train their men to face the threats at home, and Israel will not want to establish training bases in Israel. The compromise can be that the training will take place but it will happen in…Jordan, by Druze officers who have served in the IDF and who will be employed by private companies.

Israel has an obligation to the Druze, but it also needs to be deliberate and cautious in its behavior so that it does not reach a state of having to control Druze areas, something that the Druze do not want either.