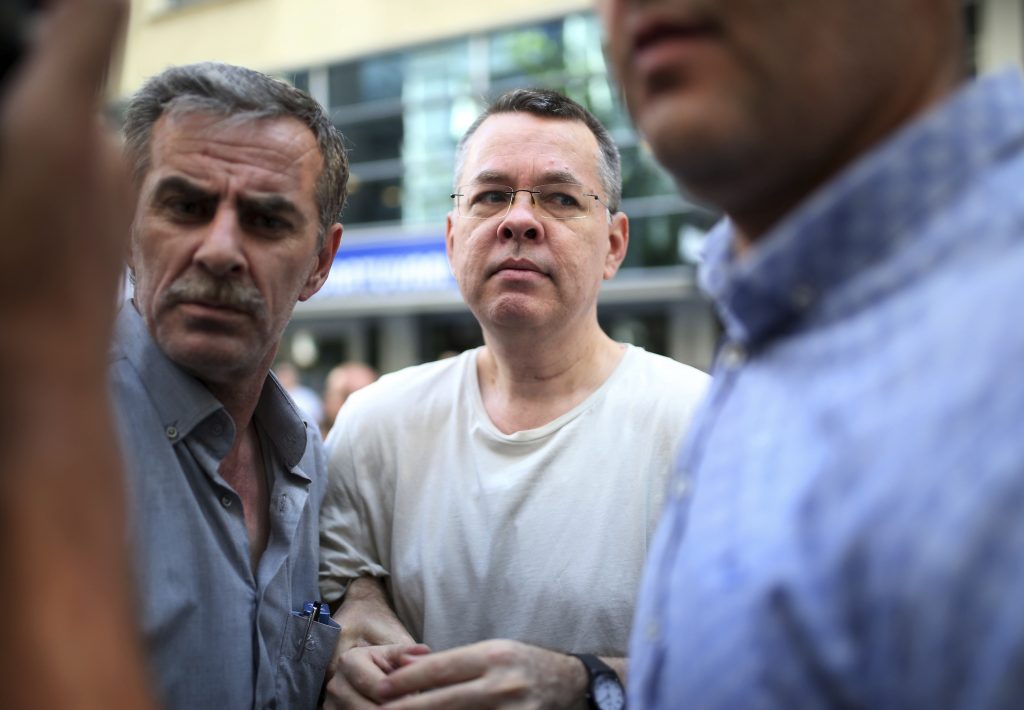 The U.S. will impose sanctions on two Turkish officials over a detained American pastor who is being tried on espionage and terror-related charges, the White House announced Wednesday.

President Donald Trump warned last week that he might impose sanctions against Turkey, a key NATO ally, for its treatment of Andrew Craig Brunson in a case that has strained U.S.-Turkish relations. Turkish President Recep Tayyip Erdogan has said his government won’t back down and was willing to “go its own way” if the U.S. imposes sanctions.

White House spokeswoman Sarah Huckabee Sanders said the sanctions would target Turkey’s justice and interior ministers, whose agencies she said were responsible for the pastor’s arrest and detention.

“We’ve seen no evidence that Pastor Brunson has done anything wrong, and we believe he is a victim of unfair and unjust attention by the government of Turkey,” Sanders said.

A Turkish justice ministry spokesman did not immediately comment on the sanctions. Turkey’s Foreign Ministry was expected to release a statement later Wednesday.

Brunson, 50, was arrested in December 2016 following a failed coup on charges of “committing crimes on behalf of terror groups without being a member” and espionage. He was recently released to home detention. He faces a prison sentence of up to 35 years if he is convicted on both counts at the end of his ongoing trial.

The evangelical pastor, who is originally from Black Mountain, North Carolina, has lived in Turkey for 23 years and led Izmir Resurrection Church.

Under the sanctions to be imposed by the Treasury Department, any property, or interest in property, belonging to Justice Minister Abdulhamit Gul or Interior Minister Suleyman Soylu within U.S. jurisdiction would be blocked. Americans would generally be prohibited from doing business with them.

Erdogan has denied speculation that there had been an agreement to swap Brunson for Turkish citizens being held abroad, particularly 27-year-old Ebru Ozkan. Ozkan had been detained by Israel on terror-related charges, but was deported this month.

The Turkish leader previously connected Brunson’s return to the U.S. with the extradition of Fethullah Gulen. Ankara blames Gulen for the coup attempt, while the cleric denies involvement.

Erdogan has also warned that Turkey would seek international arbitration if the United States refused to deliver F-35 fighter jets in retaliation.