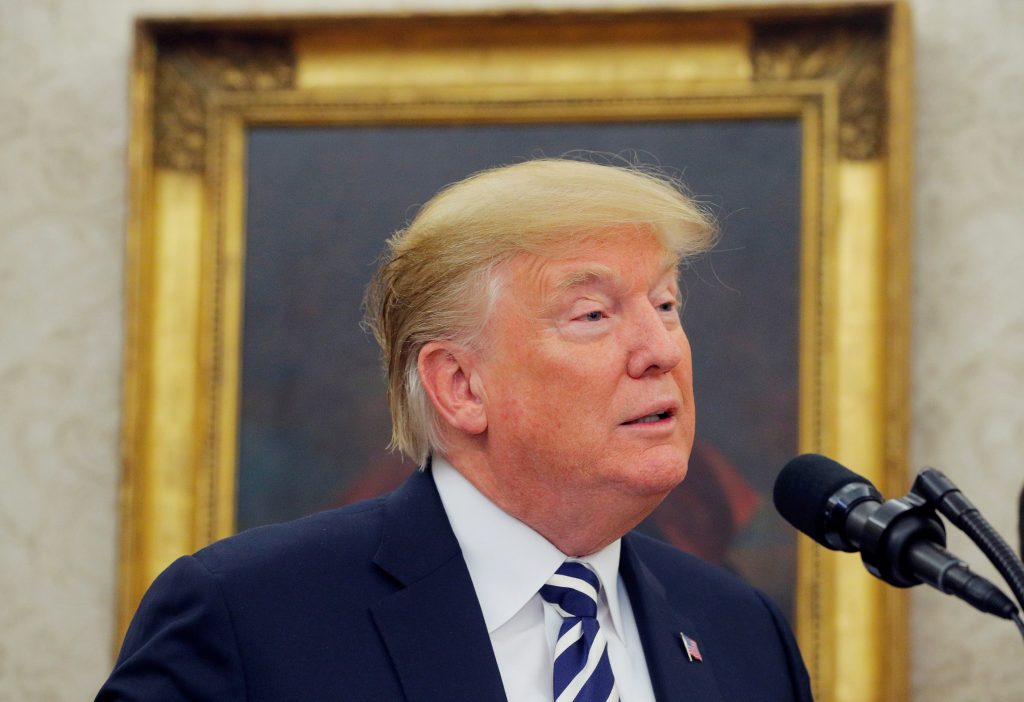 President Donald Trump has indicated to staff that he won’t try to shut down the federal government before the midterm elections to try to win more money for a wall at the U.S.-Mexico border, administration officials said Tuesday.

Despite Trump’s recent public threats that he saw “no problem” in shutting down the government to secure backing for one of his key campaign promises, two officials said Trump recognized the political cost of a shutdown before the November elections and had assured staff he wouldn’t provoke a fiscal crisis until after Election Day. A congressional aide said the White House had sent a similar message to Capitol Hill amid widespread anxiety about a potential shutdown as Republicans face tough re-election fights.

The two officials and the congressional aide spoke on condition of anonymity because they were not authorized to publicly discuss internal deliberations.

Trump on Monday threatened a shutdown for the second time in two days, seeming to put himself further at odds with Republicans in Congress. The threats came days after GOP leaders believed they had secured a pledge of Trump’s patience on the budget.

A shutdown when government funding expires at the end of September, just weeks before the midterm elections, would be the second under unified Republican control of Washington, following a weekend stoppage in January.

The president is eager to stress immigration during the fall election, believing it will fire up his base. Republican leaders disagree, hoping they can avoid a high-profile display of dysfunction and focus their message on the GOP tax cuts and the strong economy.

Trump has proven to be an inconsistent negotiating partner with Capitol Hill, as evidenced by his most recent mixed messages on a potential shutdown. Earlier this year he publicly weighed vetoing a government spending bill he had backed just days earlier, facing criticism from conservative allies that it didn’t address his immigration priorities.

The president has made no secret of his belief that his hard-line immigration policies boosted him to the Oval Office, and he launched an aggressive push for additional border security measures early this year. They include $25 billion toward construction of a wall along the U.S.-Mexico border, but Trump acknowledged on Monday his demands are a starting point.

Republican leaders believed they had an understanding with Trump last week when they met at the White House to discuss strategy ahead of the budget year that starts Oct.1. After the meeting, Senate Majority Leader Mitch McConnell told a radio interviewer that a shutdown so close to the Nov. 6 midterm elections wouldn’t happen. He said the border funding issue, in particular, would probably have to wait until after the elections.

But on Sunday, Trump reversed course in a surprise tweet: “I would be willing to ‘shut down’ government if the Democrats do not give us the votes for Border Security, which includes the Wall!”

“Must get rid of Lottery, Catch & Release etc. and finally go to system of Immigration based on MERIT!” he tweeted.

With time short, lawmakers appear most likely to approve a short-term funding measure to keep the government open through Election Day. That would set up another fiscal showdown during a lame duck session.

Trump campaigned on a promise of building a wall to deter illegal immigration and to make Mexico pay for it. Mexico has refused, leading Trump to look to U.S. taxpayers to fund the endeavor instead, at least for now.

Trump has gotten some wall money from Congress, and likely will get more, though the total is well short of the $25 billion he has requested.

He also wants changes to legal immigration, including scrapping a visa lottery program. In addition, Trump wants to end the practice of releasing immigrants caught entering the country illegally on the condition that they show up for court hearings. And he wants to shift the U.S. immigration system to one based more on individual merit and less on family ties. Democrats and some Republicans have objected to those proposals.

Both chambers will have a short window to act before government funding expires at midnight Sept. 30.

The House is in recess and won’t return until after Labor Day. The Senate will stay in session for most of August, except for a weeklong break scheduled to begin Aug. 6. McConnell canceled most of his chamber’s recess to give senators time to work on the annual spending bills.

House Republicans released a spending bill this month that would provide $5 billion next year to build Trump’s wall, a plan Trump supports.