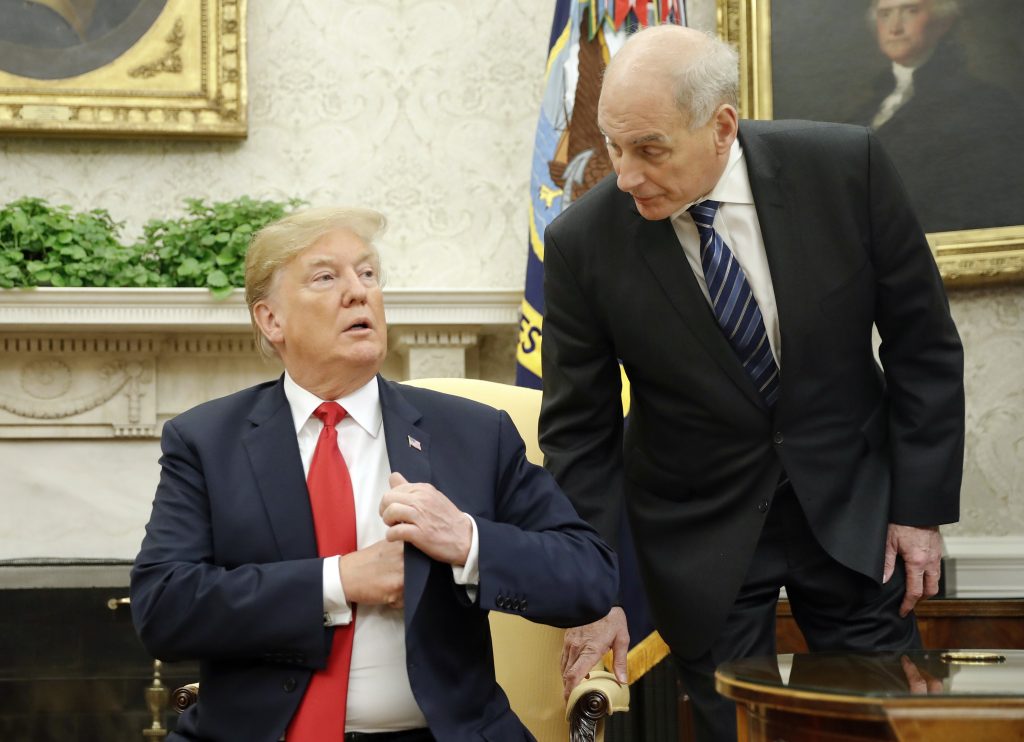 John Kelly plans to remain as White House chief of staff through President Donald Trump’s 2020 re-election campaign, a White House official confirmed Tuesday, quieting speculation that Kelly was nearing the exits because of tensions with the president.

Kelly, who on Monday celebrated his first anniversary as chief of staff, told West Wing staff Monday that he will be staying in his post at President Trump’s request through the remainder of the president’s first term.

Kelly, a retired four-star Marine Corps general, has had a rocky tenure in the West Wing and was widely expected to leave his job this summer. But his announcement, which was first reported by the Wall Street Journal and confirmed to The Washington Post by a White House official, ends for now what had become rampant chatter in Washington about Kelly’s departure and who might replace him.

President Trump had openly weighed replacing Kelly in recent months, consulting friends and advisers about Kelly’s performance and soliciting feedback on potential successors – including Mick Mulvaney, a former congressman who heads the Office of Management and Budget and the Consumer Financial Protection Bureau, and Nick Ayers, a Republican strategist who serves as chief of staff to Vice President Mike Pence.

Mulvaney had been pitching himself for the job – even to the president – arguing that he had effectively run two important agencies, would not try to manage the president, was loyal to the Trump family and could be trusted not to leak information to journalists, according to people familiar with the conversations.

But Trump has decided to stick with Kelly – for now, at least. As with all personnel matters in the Trump White House, circumstances could change, and Kelly may not end up staying in his job through the 2020 election, considering he serves at the pleasure of a president who often acts on impulse and whim.

Kelly was appointed last July to succeed Reince Priebus, Trump’s first chief of staff, after serving for the first six months of the administration as secretary of homeland security.

Kelly sought to bring rigid order and discipline to the West Wing, but Trump chafed under his restrictions.

These days, Kelly is a shadow of himself of a year ago. Once President Trump’s gatekeeper who unilaterally controlled who entered the Oval Office and which ideas could be presented to the president, Kelly now is more of an operational chief and has given up somewhat on policing access to the president.

Trump and Kelly have privately argued at times and complained about one another to confidants. But their relationship appeared to have stabilized somewhat in recent months as the president felt more empowered to call his own shots, and the chief of staff loosened some of his restraints.

On Monday, Trump marked Kelly’s anniversary by posting to Twitter a photo of the two men smiling in the Oval Office with the caption “Congratulations to General John Kelly. Today we celebrate his first full year as @WhiteHouse Chief of Staff!”

Kelly’s tenure was marred by his handling of the domestic abuse allegations against staff secretary Rob Porter, who resigned in February. His credibility suffered from a string of misstatements, including an attack he leveled in the fall against Rep. Frederica Wilson, D-Fla. And he has drawn criticism inside the administration for comments his colleagues consider crude and politically tone deaf.

But Kelly still commands respect from President Trump, in part because of his military credentials, and has been a trusted adviser on national security issues in particular. Kelly, 68, and Trump, 72, are generational peers and ideologically like-minded, especially on immigration.