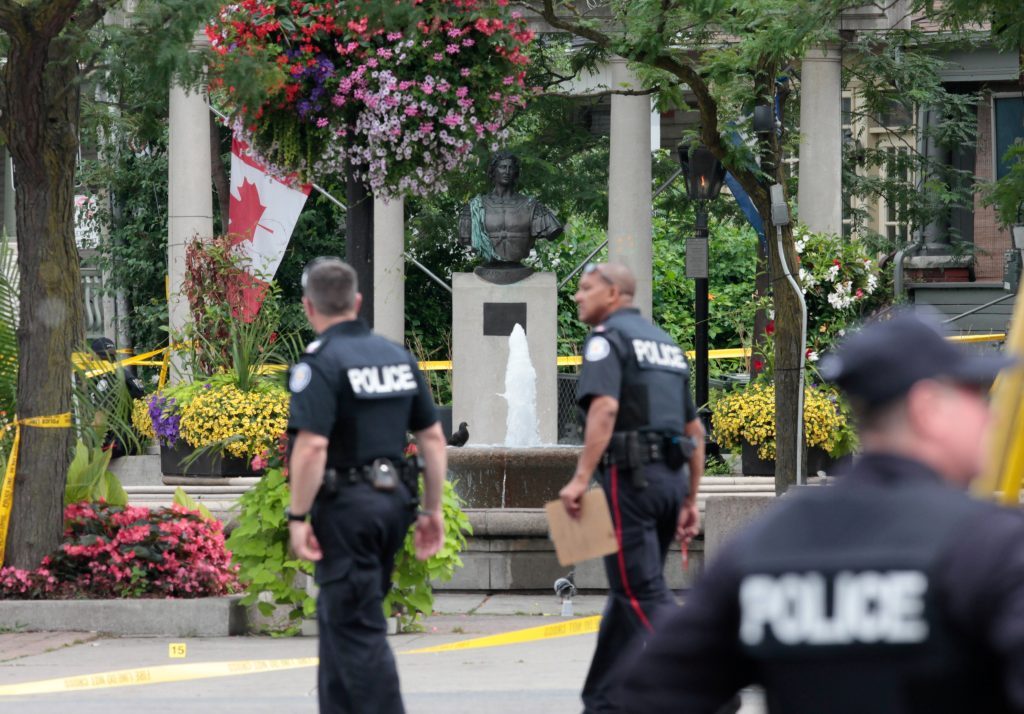 Arriving in Toronto for a family simchah last week, my wife and I found a city, at least the parts of it not involved in personal celebrations, still reeling from a gunman’s Motzoei Tishah B’Av shooting of random strangers, leaving a young woman and a 10-year-old girl dead, and 13 people injured.

The name of the culprit, Faisal Hussain, and his Pakistani parentage, along with the Islamic State’s claim that he was part of that murderous movement (“a soldier of the Islamic State,” the group crowed, “[who] carried out the attack in response to calls to target the citizens of the coalition countries”) obviously raised concerns that the terrorist, who killed himself after his rampage, had been motivated by Islamist sentiments.

Authorities in Toronto, a city of inordinate politeness, said that “at this stage,” there was no evidence connecting the shooter with radical Islam. What subsequent stages may reveal remains to be seen.

The murderer’s family expressed its “deepest condolences” to the victims and their families for what they called “our son’s horrific actions,” and said that the killer had been mentally ill. As if emotional ailments somehow lead non-evil people to kill and maim random innocents.

Wednesday night saw a vigil in the Toronto neighborhood where the rampage occurred. Thousands of Canadians held lit candles in memory of those killed. Thursday morning saw my wife and me bidding goodbye to my parents-in-law as we waited for an electronically summoned car service taxi to pick us up for the trip to the airport.

Our driver’s name, we were informed, was Hasnain.

The conversation between us and my sister-in-law, perhaps predictably, veered into terrorist territory, so to speak, as we considered whether car service drivers should be subject to suspicion based on their ethnicities or countries of origin. Not an unreasonable proposition, of course; most Islamic terrorists have Muslim names and roots in Muslim lands.

Then again, as my wife interjected, no less reasonable is the contention that the vast majority of Muslim-named immigrants from Muslim lands are neither terrorists nor their sympathizers.

I recalled a long cab ride I took a year or so ago with Mohammed (not the original one). As it turned out, he had worked for years in a kosher meat store in Brooklyn, spoke some Yiddish and had only the kindest words for his observant Orthodox erstwhile employer. (The driver had freely chosen his change of career, preferring steering wheels to meat slicers.)

The car was one minute away and so we bid our final goodbyes and went outside. Hasnain had a 4.9 (out of 5) rating as a driver but I had to wonder if he might have any rating in some unrelated field. I pushed the thought out of my head.

He was friendly, of course; a 4.9 rating isn’t earned by surliness. And most of the trip, he was silent.

After having to dodge some double-parked cars on both sides of Bathurst St. (Southern Brooklyn isn’t unique, I learned), Hasnain apologized for the swervings. His English was excellent, British-tinged.

I decided to ask him where he was from. Pakistan. How long he’d been here. Six years.

“You learned English so well in so short a time?”

“Oh, I had an excellent education in Pakistan, including in English. As a matter of fact, when we moved here, my children were well ahead of their Canadian classmates in their studies.”

I was intrigued. “What did you do for a living in Pakistan?” I asked.

“I owned a successful leatherworking factory, with high-end fashion companies across Europe as clients.” Here he dropped a list of names, one or two of which I had heard of.

“Well, I was kidnapped.”

“You were kidnapped?” my wife and I queried, in comic unison.

We asked for details but at that point we were at the airport. He just smiled and said, “I escaped.” He got out of the car and unloaded our suitcases. As we thanked him, I thought of the conversation at my in-laws’ home, not an hour earlier.

Yes, terrorists these days tend, like last week’s rampager, to have Muslim names and Muslim-majority country connections. And, yes, most Muslim-named immigrants from Muslim lands are not terrorists. Two uncontestable truths.

And, while caution is always in order, especially these days, our heads have to be sufficiently large to hold both those thoughts simultaneously.