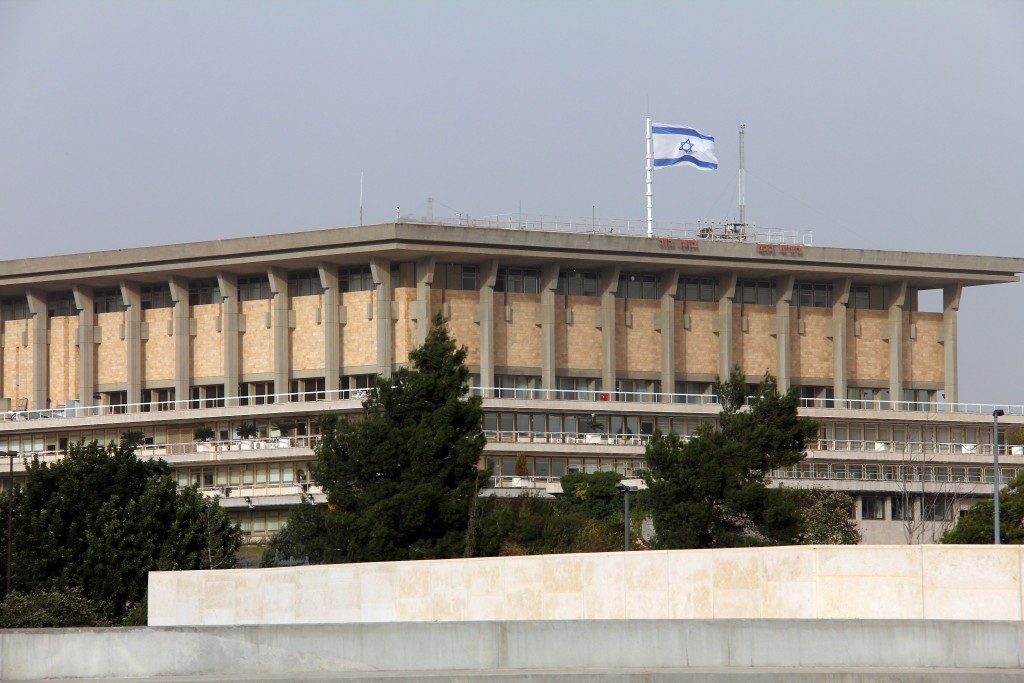 In recent weeks, the Knesset passed a law which formally defines Israel as a “Jewish State.” The measure received the votes of the Knesset’s chareidi members as well, whom, we can assume, in addition to a commitment to support a proposal of the ruling, saw pragmatic virtues in the new law. It behooves us to understand the background for this initiative and its relevance for the shomer Torah.

The constitution of a nation is the codification of its core values. Those are interpreted by a code of laws and applied by the judicial system. America’s Founding Fathers enshrined their beliefs in individual liberty in the Constitution, and now, more than 230 years later, the justice system still uses the document as a basis for determining the boundaries of our common law.

Over time, the values of societies change, and so do the boundaries of what is morally acceptable. The sensibilities of the Founders are quite different from those of many present-day American citizens, including many judges on the bench. Nevertheless, it is universally agreed that courts must continue to adapt the guidelines of the Constitution. When this is untenable, there are systems in place to amend the Constitution.

If not bound to any constitution, individual Judges may pass rulings based on their own set of beliefs, and, as such, effectively rule the country. If their core beliefs don’t reflect those of the majority of the country, the principle of democracy is compromised. They can overrule the laws passed by elected members of the Knesset, who represent the majority of voters, and this is the present state of affairs in Israel.

The State of Israel from its inception to this very day does not have a constitution. The reasons for this anomaly are many, but it was a given that Israel is the State of the Jews. But the lack of enshrining this simple fact in a constitution created a situation where the elected members of the Knesset, of whom the majority belong to the right, and the Judiciary, who are mostly tuned to the left, are on a constant collision course.

The core issue is the character of the State. Although right and left agree that it is a State for the Jews, they differ very much on how that defines the present reality of the State.

According to the left, even if Jews were a Nation in the past, the fulfillment of the Zionist dream renders this concept obsolete. Anybody who wishes to join the country should be identifed as an Israeli, a new kind of nationality that is in tune with today’s cosmopolitan, progressive society. Needless to say, this attitude is at its core completely secular. It is along these purely secular lines that Israel’s judiciary operates, which for obvious reasons, puts it at odds with traditional Jewish thinking.

The majority of the right is a muster of traditional Zionists – some secular, some traditional Jewish, some committed religious. What they all agree on is that Israel is the fulfillment of the Zionist dream, and as such is not only a State for Jews but a “Jewish State.” What that realistically means is a matter of opinion. The religious wish to establish the State on principles of Torah; the secularists at best as a loose framework based on the values of traditional Judaism.

Despite the diversity of opinion, all the right-wing parties joined to pass this Law. They all agree that matters of common importance, like laws concerning Yehudah and Shomron, are continually overruled by the Judiciary, and even petitions limiting the influence of Zionistic education are favored by the courts. Therefore, passing a law that declares Israel a “Jewish State” would hopefully curtail the power of the courts.

This is presumably the issue at stake. But, in truth, the agenda of Prime Minister Binyamin Netanyahu and his like goes farther than that. This leads us again back to the inception of the State.

Like most nationalist movements, the Zionist camp itself was hardly a monolith, but consisted of several divergent factions. Religious Zionists continued to view the Torah as the ideal value system on which the State should be based, but the vast majority of Zionists approached these questions from a strictly secular perspective. Those of a socialist orientation saw the State as an opportunity to build a Jewish refuge which at the same time could exemplify the ideals of Marxism. Others took a broader approach and sought to create a State that left room for different ideologies under a vague flag of Jewish peoplehood and nationalism. One thing that they all shared was that Torah values were not the standard by which the State would be obligated to operate.

The founders of the State did, of course, incorporate certain aspects of Judaism into the legal and cultural framework of the nation. The first Knesset voted, for mostly pragmatic and practical reasons, to establish Shabbos observance and kashrus as parts of public life. It was a move considered useful to the Zionists’ goal, and when they came into conflict with secular mores or the cause of nationalism, they were quickly ignored or rejected. The concept of writing a constitution based on the Torah was obviously not in the equation.

This situation left Israel with a unique hybrid body of laws, some of which enforced Torah laws and most of which were relatively standard for any nation.

It was the hope of some great — if perhaps naïve — people that Israel’s civil judicial system would be based on the laws of Choshen Mishpat, the section of Shulchan Aruch dealing with monetary matters. Rav Yitzchok Eizik Herzog, zt”l, who served as Chief Rabbi at the time of the State’s founding, was convinced that this would be the case. He and many like him were left in disbelief and disillusion when this idea was rejected.

In reality, the Israeli judicial system emerged as a fusion of British and Ottoman law, combined with various other influences that found favor in the eyes of the early judges and legal officials of the State, but one that in no way reflected Torah law. Several judges who were themselves religious did make reference to Choshen Mishpat in their rulings, but it was not given binding legitimacy.

One glaring exception to this approach was in matters pertaining to matrimonial law. The State’s founders were wise enough to realize that failure to apply the Torah’s laws in this area would cause irreparable divisions within a cohesive Jewish citizenry. Even so, the first prime minister, David ben Gurion, never failed to pose the question of “who is a Jew.” He certainly did not feel limited to what the Torah’s simple answer would be.

The unfortunate result of this inherent conflict is that even secularists who support a basic acceptance of a Torah framework for matrimonial laws wish to limit Rabbinic control over marriage and divorce. They see this as an area that should be open to a reasonable compromise, as in all political areas.

Prime Minister Netanyahu has always been the model of a secular Zionist, with an embrace of ideals that sometimes appear as rooted in Jewish values. This, joined with political exigency and survival tactics, put him in good standing with religious Jewry. Yet, his own values are rooted far more in the philosophy of the Zionist thinker and leader Ze’ev Jabotinsky, of whom the prime minister’s father was an ardent admirer.

It is on these grounds that the prime minister and his supporters came into conflict with the Israeli political left over the recent Nation-State bill. We must not mistake his desire to define Israel as “Jewish” as having any connection to what that term means to a Torah Jew.

In all fairness, it must be clearly stated that Prime Minister Netanyahu’s motivations in pursuing the bill were not to create a basis upon which to discriminate against minorities, as his opponents have claimed, but rather to clarify that Israel is primarily a state of Jews, just as France is one of Frenchmen and Spain is one of Spaniards, not a nation of Jewish immigrants like the melting pot of America.

As we return to the question of whether this law is beneficial for the goals of Torah Jews, as is often the case, there is no black-and-white answer.

Until now, the judicial system lacked a legally binding definition of Israel as a “Jewish State.” It allowed judges, especially high-ranking ones who are predominantly left-wing secularists, to create an evolving jurisprudence in which the few aspects of Torah law that the State does incorporate, like the prohibition of intermarriage, are potential targets of judicial activism.

Presumably, a law such as this restricts this approach, or, at the very least, challenges their efforts. This was precisely the prime minister’s goal — to create a quasi-constitutional law that would hold back the courts from interfering with the Knesset’s pursuit of policies aimed at strengthening the national Jewish character of the State. From our perspective, irrespective of the motivations, a move that impedes legal secularization is indeed positive and will hopefully buttress areas of law where the State does embrace Torah standards.

Yet, we must be wary of what the flip side of this law could ultimately bring. While Prime Minister Netanyahu and the late David ben Gurion are figures on opposite sides of the right/left political spectrum, both see Jewish peoplehood through the lens of secular Zionism. The question “who is a Jew” is just as open-ended for Netanyahu as it was to the first occupier of his seat. To such a person, defining the State as “Jewish” could easily result in additional pressure of who is deemed worthy of that title, be they questionable candidates for conversion or even non-Jewish spouses of Jews.

While Netanyahu has largely resisted pressure from the Reform and Conservative movements to “modernize” the standards of the State-sponsored rabbinate, be assured this is because he understands keenly that long-term financial and moral support for Israel rests with traditionalists, and not with the so-called “progressives.”

We can assume that the chareidi Knesset members are equally aware of these potential pitfalls. Yet, given an opportunity to place a roadblock before the courts’ efforts to stymie laws that could potentially strengthen the Jewish character of the State, they chose to support the measure.

As Torah Jews, we can only hope that the benefits of this law for Klal Yisrael will come to fruition, but we must remain on guard lest it to be used as entree to revisit ben Gurion’s beloved question of “who is a Jew.”