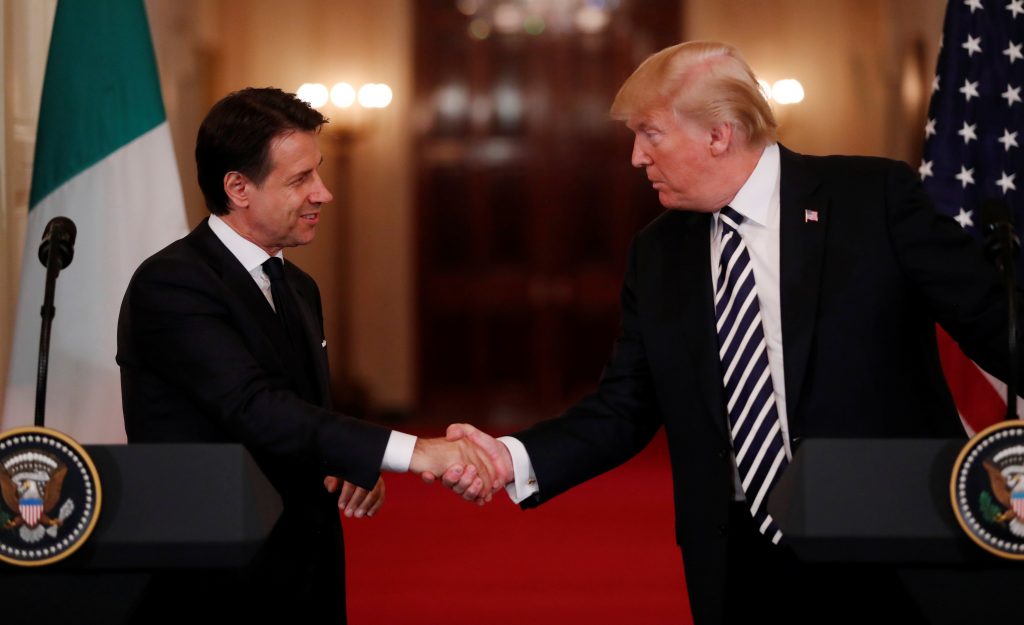 Two political outsiders, President Donald Trump and Italy’s new premier, expressed solidarity on migration issues on Monday as they showed signs of a fledgling alliance at a time when the U.S. has dealt with strained relations with European leaders.

Trump greeted Italy’s Giuseppe Conte as “my new friend” and said they bonded at the recent G7 meetings in Canada, crediting the prime minister for taking a “firm stance on the border.” The president said the U.S. and Italy would pursue a new strategic dialogue on security issues, terrorism and immigration.

“We are both outsiders to politics. Can you believe it?” Trump said during a joint news conference with Conte. Trump said both were “determined to protect the rights and needs and interests and dreams of our citizens and we will do that.”

Italy under Conte’s new government has pushed for the European Union to accept tens of thousands of migrants coming across the Mediterranean Sea every year. The meeting follows a recent standoff over a private aid boat carrying more than 200 people who were rescued at sea. Italy, Malta and France all refused to let the vessel disembark.

Trump welcomed the prime minister to the White House for the first time since Conte came to power in June, bringing together two outsider leaders who have emerged from populist waves within their countries.

Conte leads the euroskeptic coalition of the 5-Star Movement, which considers itself anti-establishment, and the right-wing, north-based League party.

Trump last week avoided escalating a trade dispute with the European Union and his administration is expected to begin negotiations quickly on avoiding tariffs on automobiles and removing trade barriers. But it followed tensions between the U.S. and EU over trade and the transatlantic alliance.

During their talks, Trump noted the U.S. trade deficit with Italy, a member of the EU, and said he was certain “we’ll straighten that out pretty quickly.”

Conte, in his remarks, said both he and Trump were leading “governments that represent change; they were chosen by citizens to change the status quo.” He cited Italy’s “innovative approach” on immigration and expressed support for Trump’s recent talks with Russia Vladimir Putin.

Prior to the meeting, the White House referred to Italy as an important NATO ally and a key partner to U.S. forces in Afghanistan and Iraq. Trump thanked Italy for its contributions on the fight against the Islamic State and NATO efforts in Afghanistan and later pointed to his push for NATO allies to spend more on defense.

But Trump steered clear of publicly faulting Italy for not spending more on defense, or meeting the previously agreed-upon target of 2 percent of gross domestic product by 2024. Italy spent an estimated 1.15 percent of GDP on defense in 2018, according to NATO figures.