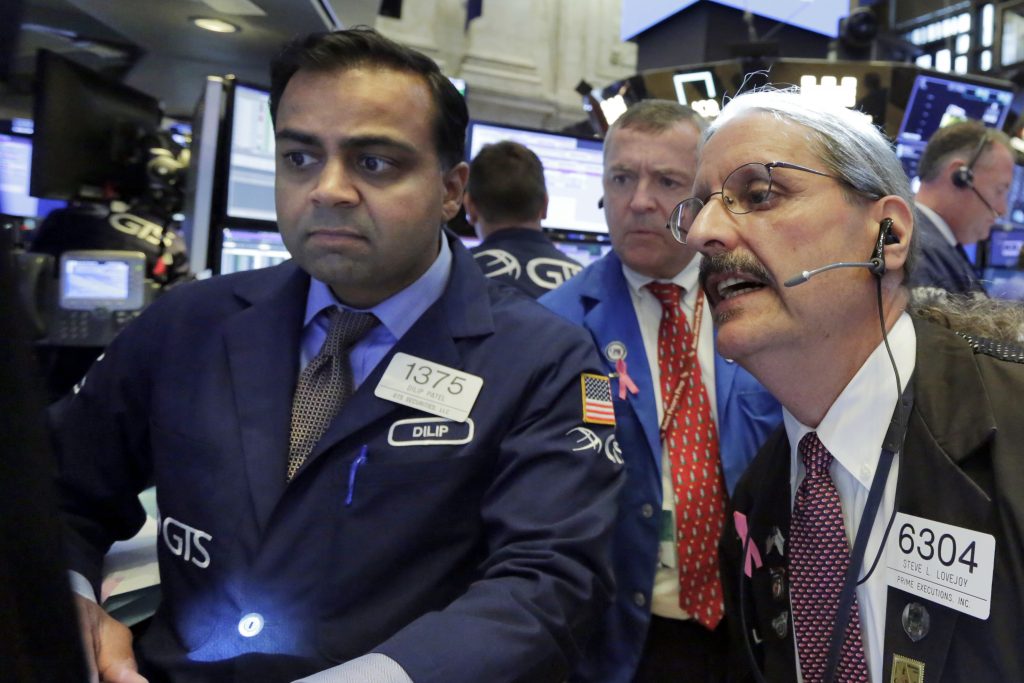 Technology stocks are falling again Monday as recent Wall Street favorites like Twitter, Alphabet and Facebook extend their losses from last week. It’s a sharp turnaround for a group that had long been the stock market’s undisputed leader.

A jump for energy stocks helped to offset the losses, but U.S. indexes were still modestly lower ahead of a busy week full of central-bank meetings, corporate earnings reports and the monthly U.S. jobs report.

The Nasdaq composite has more technology stocks among its ranks, and it fell 116 points, or 1.5 percent, to 7,621. It’s on pace for its third straight loss of at least 1 percent, which would be the first time that has happened in nearly three years.

The losses were concentrated in technology stocks. Overall, slightly more stocks rose on the New York Stock Exchange than fell.

TECH LOSSES: Technology stocks in the S&P 500 slumped 2.3 percent, far worse than any of the other sectors of the index. It follows a rough week for the industry after reports from Facebook and Twitter raised concerns about their growth, sending their stock prices plummeting. Twitter dropped 7.8 percent to $31.44 following its 20.5 percent plunge on Friday.

Amazon fell 2.3 percent to $1,774.88. Netflix, which also plunged after a disappointing quarterly report this month, slid another 5.2 percent to $336.65. Like Twitter, Netflix has roughly doubled in value over the last year but has fallen sharply in July. It’s down 19.6 from its record high July 9.

HIGH ENERGY: Energy companies climbed as the price of benchmark U.S. oil spurted higher by 1.9 percent to $70.01 a barrel. Brent crude, the international standard, rose 1 percent to $75.55 a barrel in London.

TARIFF TALK: Caterpillar surpassed Wall Street expectations in the second quarter and raised its forecasts for the year as the construction market remained strong. The company said new tariffs will cost it $100 million to $200 million this year but will make up for it by raising prices. Caterpillar rose 0.9 percent to $143.78.

Meat producer Tyson cut its profit forecast because of rising tariffs and uncertainty about trade policies. The company said tariffs by the U.S. and other countries are affecting both imports and exports. The stock has been plunging since late January and dropped another 6.9 percent to $59.17 Monday.

RATE WATCH: The Federal Reserve will begin a two-day meeting Tuesday on interest-rate policy. The Fed has said that it may raise rates two more times in 2018, but few economists expect a move at this upcoming meeting.

More action may come from the Bank of England, which is expected to raise its key interest rate by a quarter of a percentage point on Thursday as inflation remains high. The Bank of Japan will also be meeting this week.

YIELDS: The yield on the 10-year Treasury note rose to 2.97 percent from 2.96 percent late Friday. It’s been climbing for the last couple of weeks and is close to breaching 3 percent for the first time since May.

JOB GAINS: The U.S. jobs report is usually the most anticipated piece of economic data each month, and it arrives on Friday. Both the job market and economy have been strong recently, and economists expect Friday’s report to show that employers added 193,000 jobs in July. That would be a slight slowdown from June’s growth of 213,000.

In Europe, France’s CAC 40 fell 0.4 percent, and the DAX in Germany dropped 0.5 percent. The FTSE 100 in London was virtually flat.