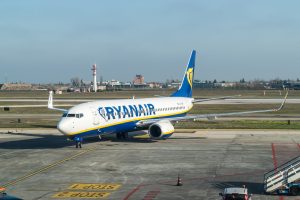 Ryanair Holdings’s labor crisis deepened on Monday as pilots in Germany voted to strike in a dispute over pay and conditions.

Crews could walk out at 24 hours’ notice after more than 96 percent of respondents backed industrial action in a poll, the Vereinigung Cockpit union said in a statement. It set an Aug. 6 deadline for the discount carrier to avoid disruption by submitting terms that could form a basis for negotiations.

“So far Ryanair has not made any proposal with which we could work,” said Ingolf Schumacher, the union’s chairman of industrial relations, adding that the latest round of exploratory talks on Friday had “yielded no progress.”

Ryanair scrapped more than 600 flights last week amid strikes by Irish pilots and cabin crew in Italy, Spain, Portugal and Belgium. The disruption at the height of the summer travel season marks the first time the Dublin-based carrier has faced significant industrial action and comes after it agreed to recognize unions in the wake of a staffing crunch last year.

Shares of Ryanair, which didn’t immediately comment on the Vereinigung Cockpit announcement, were trading on the Nasdaq down 1.9 percent Monday afternoon.

The union wants pilots to get a higher base salary so that variable payments based on hours flown make up a smaller part of overall remuneration. It’s also asking for higher sick pay and equal pay across German bases. Schumacher said Ryanair is “behaving like a wrong-way driver” in its stance on the matter.

So far the airline has fought back hard, putting 300 Dublin staff on notice for possible job losses because it says strikes have hit consumer confidence — and advising them to move to Poland. The Irish Air Line Pilots’ Association followed up by announcing a fourth day of strikes on Friday.

Ryanair last week posted a 20 percent drop in quarterly profit and predicted further strikes “as we are not prepared to concede to unreasonable demands that will compromise either our low fares or our highly efficient model.”

Vereinigung Cockpit staged the first-ever strike to hit Ryanair, when a four-hour stoppage in December caused delays but no cancellations. The airline has 11 bases in Germany.