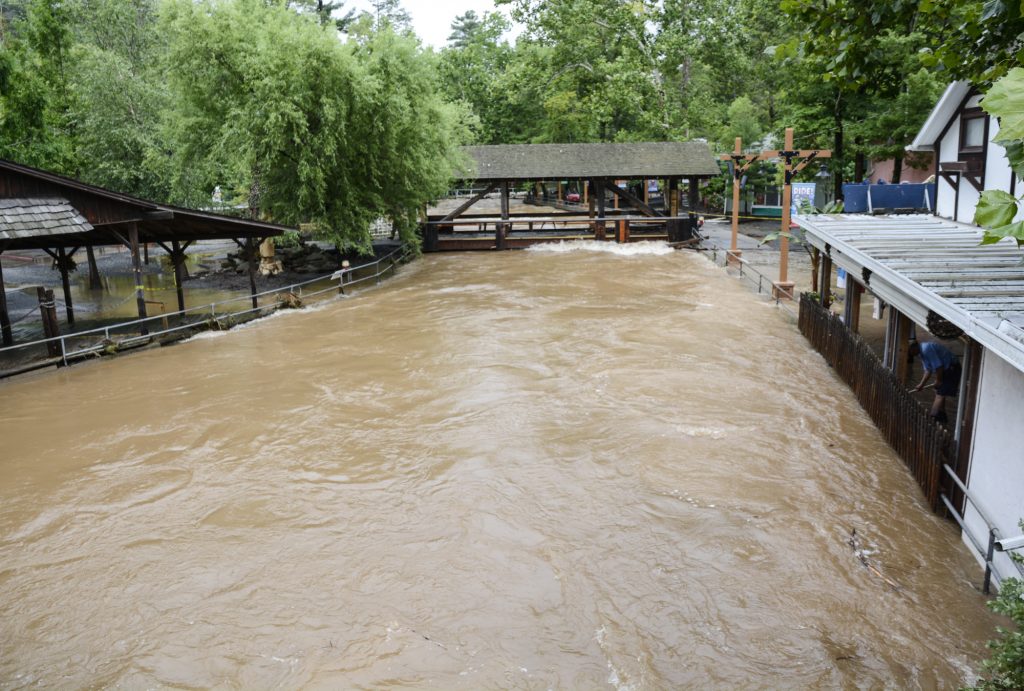 Five days of relentless downpours have left central Pennsylvania a soggy mess, closing roads and businesses, sending creeks and streams spilling over their banks and requiring rescues and evacuations.

Firefighters helped people escape their flooded neighborhood near Hershey on Wednesday morning, and search crews have not been able to find a woman swept away Monday night while crossing the rain-swollen Conewago Creek near Elizabethtown.

Rainfall of up to 7 to 11 inches drenched the region over the past five days, with more on the way before clearer weather was expected Thursday.

July rainfall records were set in Williamsport and Harrisburg, most of it falling since Saturday morning.

“We’ve experienced what we call an atmospheric river, which is where the pattern sets up and creates a fire hose, bringing moisture from the Atlantic,” said John Banghoff, a meteorologist with the National Weather Service in State College.

Hersheypark and Knoebels Amusement Park in Elysburg — both located along flooded streams — shut down Monday, Wednesday and Thursday.

The Red Cross opened shelters in Hershey and in the Susquehanna River town of Marietta.

A Lancaster County dispatcher told LNP newspaper there was a spate of water rescues overnight and there were so many closed roads they could not count them all.

The state Transportation Department said 97 roads were closed by early Wednesday afternoon, but no major highways.

The heavy precipitation caused significant damage in Schuylkill County, where the National Guard deployed two helicopter-based rescue teams and four high-water vehicles on Monday. In all, 73 National Guard personnel were on active duty, helping with the flood-related response. Gov. Tom Wolf was expected to tour that region on Thursday.

The mayor of Tremont told the Pottsville Republican Herald that 70 structures in his 1,700-population borough were damaged by the water.

“It just came in like a river,” Tremont resident Sheena Giebler told the paper after 6 feet of water ruined oil tanks and appliances in her basement, and destroyed three vehicles. “There was no time.”

Banghoff, from the weather service, warned people not to become complacent on Thursday as sunny skies were forecast. Flood waters still pose dangers in the form of swift currents and a potentially toxic mix of chemicals.

“I’d encourage people to still not feel invincible, in that rivers are expected to continue rising tomorrow and into Friday,” Banghoff said.

Officials at PEMA activated the state’s response coordination center, monitoring conditions and sending state equipment and personnel where they might be helpful.