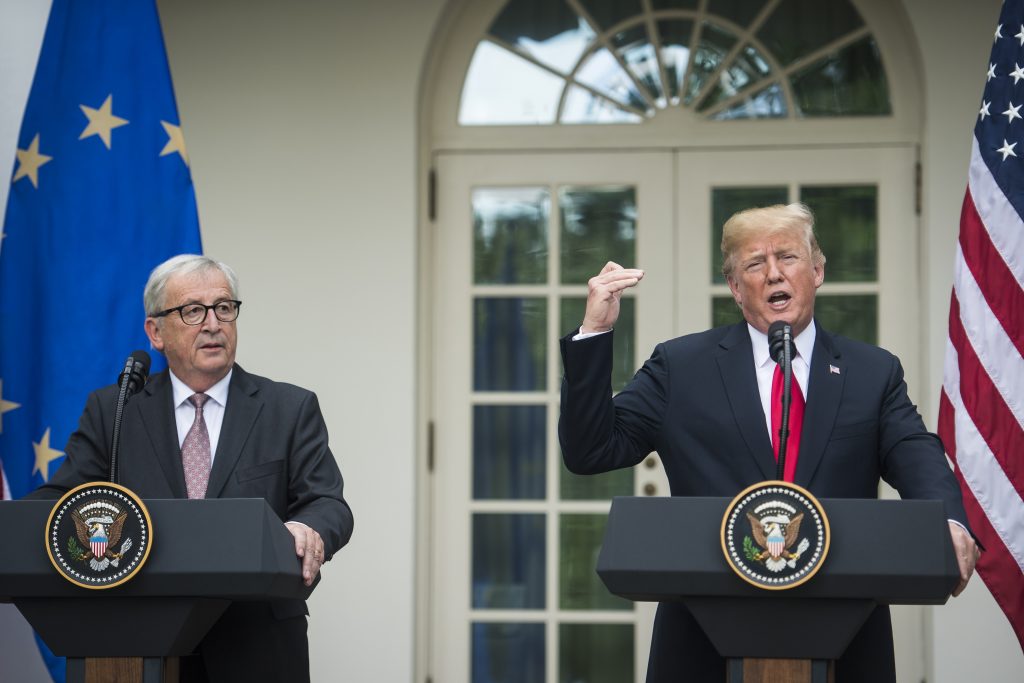 The deal calls for both sides to “work together toward zero tariffs” on non-auto industrial goods, President Trump said at a joint appearance in the Rose Garden. The European Union will also import more U.S. soybeans and liquified natural gas, or LNG, both leaders said. And both sides will work together to reform the World Trade Organization, they said.

While Washington and Brussels pursue these aims, the leaders agreed “we hold off further tariffs and reasses existing tariffs on steel and aluminum,” Juncker said.

Trump imposed global tariffs on aluminum and steel earlier this year as part of his escalating trade confrontation, and he is currently weighing the imposition of auto tariffs.

“While we are working on this, we will not go against the spirit of this agreement unless either party terminates the negotiation,” Trump said. “We also will resolve the steel and aluminum tariff issues and we will resolve retaliatory tariffs.”

Juncker said the EU would build more terminals to import LNG as part of the deal.

The statements, at an unexpected press conference, could temporarily ease fears of a further escalation of Trump’s trade war. Markets jumped in the closing minutes of the day when word of a potential deal began to circulate.

However, Trump has backed off trade confrontations in the past, only to resume hostilities. In addition to tariffs on aluminum and steel, Trump has imposed tariffs on washing machines, solar panels and a wide range of Chinese products.

The de-escalation came after an uproar among businesses and Republican lawmakers about the potential impact of Trump’s strategy on the economy. Ahead of Wednesday’s announcement, several of President Trump’s senior economic advisers believed he was planning to push forward with 25 percent tariffs on close to $200 billion in foreign-made automobiles later this year, three people briefed on internal discussions said.

Trump has become increasingly defiant in his trade strategy, following his own instincts and intuition and eschewing advice from his inner circle. He has told advisers and Republicans to simply trust his business acumen, a point he tried to reinforce Wednesday morning in a Twitter post.

“Every time I see a weak politician asking to stop Trade talks or the use of Tariffs to counter unfair Tariffs, I wonder, what can they be thinking?” Trump said Wednesday. “Are we just going to continue and let our farmers and country get ripped off?”

Commerce Department officials have been considering a variety of options to address Trump’s insistence that cheap foreign cars are flooding the U.S. market, and some of those measures would stop far short of imposing tariffs, two people briefed on the discussions said.

Several months after Trump first imposed tariffs on steel and aluminum imports, the United States is now in economic skirmishes with China, Japan, the EU, Canada, Mexico and Turkey. Trump has also recently complained about what he views as unfair trade practices from India, suggesting he could soon turn his attention to the world’s second most-populous country.

Disharmony within the White House over the trade strategy has been spilling into public view. On Wednesday, White House budget director Mick Mulvaney said at a CNBC event that he and National Economic Council Director Larry Kudlow were at odds with others on how to proceed on trade, but that Trump made the ultimate decisions on his own.

“The president hears all the arguments, but he makes the final decision,” Mulvaney said.

Trump appears to be irked by people questioning his approach.

“When you have people snipping at your heels during a negotiation, it will only take longer to make a deal, and the deal will never be as good as it could have been with unity,” he said in another Wednesday morning Twitter post. “Negotiations are going really well, be cool. The end result will be worth it!”

There are growing signs, though, that Trump is cognizant of the GOP trade criticism and taking steps to try to quell a mutiny. His administration on Tuesday announced up to $12 billion in emergency aid to farmers who are facing retaliatory tariffs from Mexico and China, among other countries.

Farmers have called on Trump to back down from his tariff strategy, but Trump made clear as recently as earlier Wednesday that he had no plans to, believing it gives him the upper hand in negotiations.

The Commerce Department held an open meeting last week and heard from 45 different groups on the automotive review, with all but one cautioning against these tariffs. The only group that offered measured support was the United Auto Workers.

Some outside advisers have privately urged Commerce officials to tailor any restrictions so that they only affect advanced technology used in cars and not the cars themselves, creating an opening for U.S. companies without inadvertently driving up broad costs on consumers.

But Trump was presented with a similar array of proposals on the steel and aluminum tariffs, and he selected the most severe one, arguing it was needed to correct what he viewed as unfair practices by foreign countries.

“The one thing I do know about Trump is that he’s not going to back down,” said Steve Moore, who was a top economic adviser to Trump during the 2016 campaign. “He’s not going to be bullied. That means the ball is in these other countries’ court.”