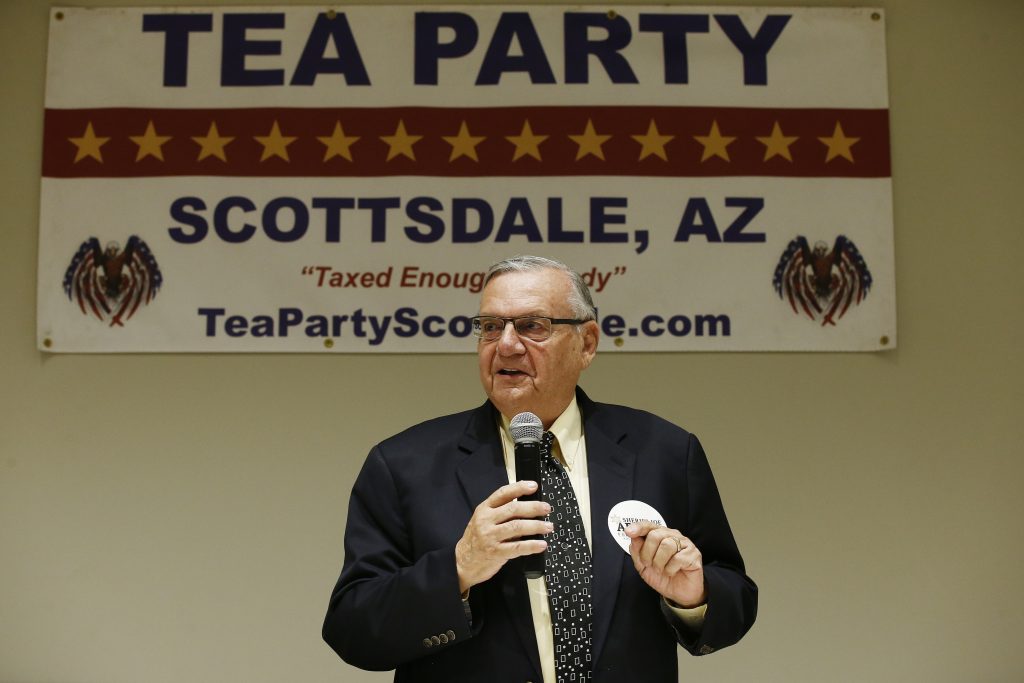 The American Civil Liberties Union is spending $720,000 in the U.S. Senate race in Arizona to send people into neighborhoods to hand out fliers and run a commercial critical of former Sheriff Joe Arpaio’s treatment of immigrants.

The legal advocacy group normally stays out of political races, but it is getting involved in the Arizona campaign and other races across the country to emphasize the importance of civil liberties to voters, said Steve Kilar, a spokesman for the ACLU’s affiliate in Arizona.

“Joe Arpaio’s record in particular is so emblematic of what can happen if people aren’t paying attention to civil liberty records of the people they are electing,” Kilar said, adding that the group doesn’t endorse candidates and instead gives voters information so they can make decisions on issues affecting civil liberties. The $720,000 spent by the ACLU in the Arizona race includes $400,000 in expenditures reported Wednesday.

The case brought the worst legal defeats in Arpaio’s 24-year tenure as metro Phoenix’s sheriff, including a criminal contempt of court conviction for intentionally disobeying the judge’s orders to stop his immigration patrols. Arpaio, now 86, was spared a possible jail sentence when he was pardoned nearly a year ago by President Donald Trump.

Arpaio said the ACLU is worried that he’ll win the Aug. 28 GOP primary and will move on to beat U.S. Rep. Kyrsten Sinema, considered the front-runner among Democrats, in the Nov. 6 general election. “I am pretty happy that they are worried about me,” Arpaio said.

In the past, local ACLU affiliates have done political advocacy, but the effort in the Arizona Senate race marks the first time the group’s national office has participated in voter education efforts in a federal election, Kilar said. “Nationally, I will say that this isn’t the last time you will see it happen,” Kilar said.

Faiz Shakir, the ACLU’s national political director, said the group’s new emphasis on political advocacy was driven by a flood of new members who joined after Trump was elected and were concerned that the new president posed a threat to civil liberties.

“Donald Trump lit a fire under the ACLU and its membership and gave us an additional power and strength that we didn’t have before,” Shakir said.

In recent months, the group’s political activities include a seven-figure ad buy to try to raise awareness about immigrant children being separated from their parents, ads in Alaska and Maine calling for Trump’s Supreme Court nominee to declare a position on some decisions, and spent $170,000 in a sheriff’s race in Mecklenburg County, North Carolina.

The 30-second ad running in Tucson and Phoenix says Arpaio terrorized Latinos and immigrants for years and that his GOP opponents, U.S. Rep. Martha McSally and former state Sen. Kelli Ward, have joined Arpaio in his anti-immigrant views. It shows images of Arpaio with Arizona Gov. Doug Ducey, detained immigrant children who were separated from their parents, and an image of the outdoor complex of jail tents that helped make Arpaio famous.

“Dr. Ward is proud to stand with President Trump and will never apologize for leading the charge to secure the border; pathetic attacks from the ACLU certainly will not change her position and won’t move the voters of Arizona at all,” Ward spokesman Zachery Henry said in a statement.