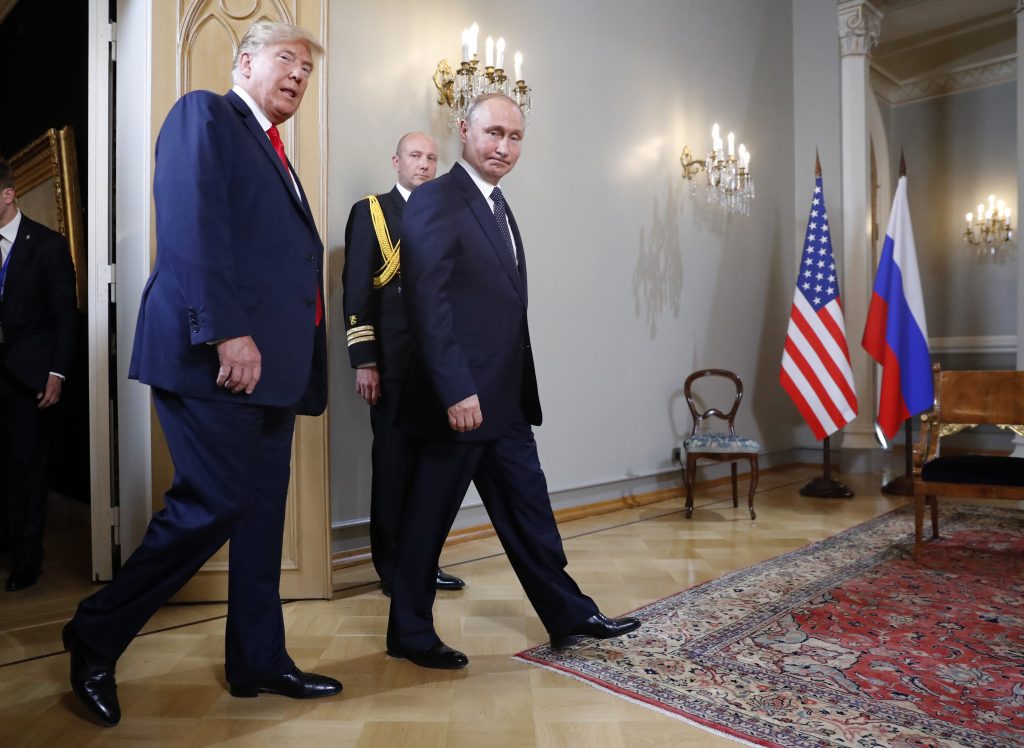 The definition of insanity is doing the same thing again and again and expecting to get a different result, which is one of the many reasons President Trump’s news conference with Russian President Vladimir Putin seemed so insane. Trump is trying to do something that both of his immediate predecessors tried to do: turn over a new leaf with Russia. They both failed, and so will he.

Recall that George W. Bush entered the White House promising to end the “dead ideological rivalry” of the Cold War. At a 2001 summit with Putin in Slovenia, Bush declared, “I looked the man in the eye. I found him very straightforward and trustworthy — I was able to get a sense of his soul.” President Barack Obama tried to appease Putin by giving in to the Russian leader’s demands that we cancel our missile-defense plan with Poland and the Czech Republic — and did it on the 70th anniversary of the Soviet invasion of Poland. And while serving as Obama’s secretary of state, Hillary Clinton humiliated herself when she gave Russian Foreign Minister Sergei Lavrov a giant red button with the word “reset” on it (which, adding insult to injury, misspelled the Russian word for “reset” to read “overload”).

It is now Trump’s turn to learn the hard way that Russia is an adversary, not a competitor. His summit with Putin was a moment that called for presidential strength. It came on the heels of the indictment of 12 Russian intelligence agents for intervening in the 2016 election and of Russia’s brazen use of a banned chemical weapon on British soil, which resulted last week in the death of a British citizen.

But instead of condemning these actions, Trump refused to acknowledge or denounce the fact of Russia’s election interference, and he publicly sided with Putin over his own intelligence community. It was a position he wisely retracted on Tuesday, declaring what he should have said standing next to Putin: “I accept our intelligence community’s conclusion that Russia’s meddling in the 2016 election took place.”

Trump does not seem to fathom that the problem with U.S.-Russia relations is not a lack of effort on the part of U.S. presidents. Russia is the only country on Earth other than North Korea that would dare use a toxic nerve agent to attempt to carry out assassinations on foreign soil. It is a regime that blatantly violates its nuclear and chemical weapons treaty obligations, has invaded two of its neighbors, and has threatened NATO countries (and even Mar-a-Lago) with nuclear annihilation.

Yet, as cringeworthy as Trump’s news conference was, unlike Obama, he didn’t throw U.S. allies under the bus to appease Putin or take any of the actions many feared — such as lifting sanctions or recognizing Putin’s annexation of Crimea. Unlike his rhetoric, Trump’s Russia policy has actually been a dramatic improvement over that of his predecessor.

Trump expelled 60 Russian diplomats, approved a $47 million arms sale to Ukraine, continued the deployment of NATO forces to the Baltic states, posted troops to Poland’s border with Russia and levied new sanctions against Moscow for violating the Intermediate-Range Nuclear Forces Treaty. During his first year in office, he got NATO allies to increase their defense spending by $12 billion and twice bombed Putin’s ally, Syrian President Bashar al-Assad, for his regime’s use of chemical weapons. If Putin was looking for more pro-Moscow policies from the United States, his election interference backfired in a big way.

Critics say words matter — and they are right. But if words matter, then Trump’s critics should be careful what they say. In many cases, their responses to Trump’s news conference have matched the president in absurdity. John Brennan, the CIA director under Obama, tweeted that “Donald Trump’s press conference performance in Helsinki rises to & exceeds the threshold of ‘high crimes & misdemeanors.’ It was nothing short of treasonous.” And Senate Minority Leader Charles E. Schumer (D-N.Y.) declared, “A single, ominous question now hangs over the White House. What could possibly cause President Trump to put the interests of Russia over those of the United States?”

As always, Trump’s critics bail him out by overplaying their hands. A news conference, however humiliating, is not an impeachable offense. And conspiracy theories aside, there is a simple explanation for Trump’s performance in Helsinki: He is deeply wrong on Russia. He thinks he can charm Putin into behaving like a normal leader. He’ll learn that Putin is KGB to his core, just as those before him learned.

When should we be worried? When Trump’s actions match his rhetoric. Until then, Trump’s summit was simply an embarrassment, not a disaster.