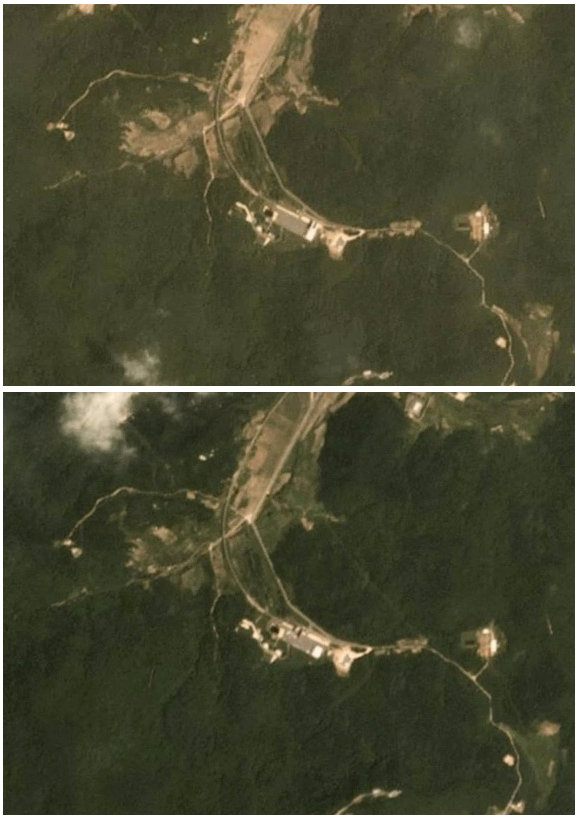 Satellite images indicate North Korea has begun dismantling key facilities at a site used to develop engines for ballistic missiles, a first step toward fulfilling a pledge made to President Donald Trump, a Washington-based think tank said on Monday.

The July 20 images showed work at the Sohae Satellite Launching Station to dismantle a building used to assemble space-launch vehicles and a nearby rocket engine test stand used to develop liquid-fuel engines for ballistic missiles and space-launch vehicles, the 38 North think tank said.

“Since these facilities are believed to have played an important role in the development of technologies for the North’s intercontinental ballistic missile program, these efforts represent a significant confidence-building measure on the part of North Korea,” it said in a report.

President Trump said after his unprecedented June 12 summit with North Korean leader Kim Jong Un in Singapore that Kim had promised that a major missile engine testing site would be destroyed very soon.

Trump did not identify the site, but a U.S. official subsequently told Reuters that it was Sohae.

An official said on Tuesday South Korea’s presidential Blue House was briefed about the site’s dismantlement based on government intelligence but did not elaborate.

“And it seems like they are going step by step toward denuclearization,” Nam said.

The 38 North report comes amid growing questions about North Korea’s willingness to live up to the commitments Kim made at the June summit, particularly to work towards denuclearization.

U.S. officials have repeatedly said North Korea has committed to giving up a nuclear weapons program that now threatens the United States, but Pyongyang has offered no details as to how it might go about this.

Shares of South Korean companies with exposure to North Korea rose after the news that the satellite site was being dismantled.

Jenny Town, managing editor of 38 North, said the work at Sohae could be an important move to keep negotiations going.

“This could (and that’s a big could) mean that North Korea is also willing to forgo satellite launches for the time being as well as nuclear and missile tests. This distinction has derailed diplomacy in the past,” she said.

Separately on Tuesday, South Korea’s Defense Ministry said it was planning “a test reduction of some guard post troops and equipment” along the heavily fortified Demilitarized Zone (DMZ) that divides North and South Korea.

North Korean leader Kim Jong Un and South Korean President Moon Jae-in agreed at a summit in April to reduce tensions along the border with an eye to turning the DMZ into a “peace zone.”

Senior U.S. officials called on Kim on Friday to act on his promise to give up his nuclear weapons and said the world, including China and Russia, must continue to enforce sanctions on Pyongyang until he does so.

The U.S. State Department issued an advisory on Monday together with the departments of Treasury and Homeland Security alerting businesses to North Korea’s sanctions-evasion tactics.

It said they should “implement effective due-diligence policies, procedures, and internal controls to ensure compliance with applicable legal requirements across their entire supply chains.”

Trump rejected “Fake News” that he was angry because progress was not happening fast enough with North Korea.

“Wrong, very happy!” he said on Twitter on Monday.

“A Rocket has not been launched by North Korea in 9 months. Likewise, no Nuclear Tests. Japan is happy, all of Asia is happy,” he said.

A report in The Washington Post at the weekend said that, despite positive assessments Trump has given on progress with North Korea, he has vented anger at aides over a lack of immediate progress.

Trump said last week there was “no rush” and “no time limit” on denuclearization negotiations.

U.S. Director of National Intelligence Dan Coats said on Thursday it was technically possible for North Korea to eliminate its nuclear weapons program within a year, but added that it was not likely to happen.