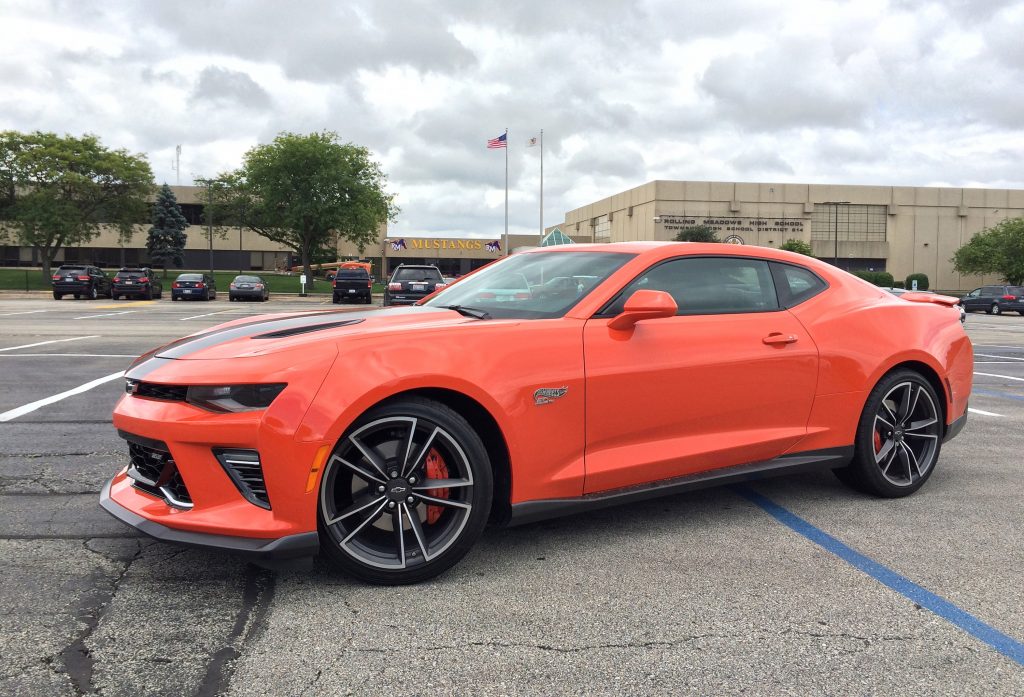 Back when the days were long and the years were endless, back when time was on my side, I used to line up two lanes of Hot Wheels and Matchbox cars, running from the family room to unknown roadways. A few decades later my kids did the same thing on the window sills overlooking our city street. We are not alone. There is something magical about a toy car, how it transports you through time and space, through reality and imagination.

The Hot Wheels package on the 2018 Chevy Camaro is the same kind of time machine. Instead of fantasizing about all the driving freedoms of adulthood in a die-cast toy, the real-life Camaro V-8 powers you through the nostalgia of youth. At least that’s the premise of the $4,995 package celebrating 50 years of Hot Wheels history.

The Custom Camaro was the first of the inaugural class of 16 Hot Wheels to be sold in 1968. It had a racing stripe and mag wheels. The 2018 Camaro 2SS features a black racing stripe bisected by an orange strip the width of a Hot Wheels track. The orange Crush exterior also evokes the toy’s racing track. It has special 20-inch satin graphic, or black, wheels that unfortunately do not have the five-spoke mag wheels with red stripe slicks of the toy version.

But the real charm is the 2SS Camaro itself. The 455-horsepower 6.2-liter LT1 V-8 engine — same as in America’s supercar, the Corvette — is a bruising, chest-thumping beast of burden. The engine note is a national anthem of engineering prowess, thanks in part to the dual-model performance exhaust ($895). There is a quiet or stealth mode to activate valves in the exhaust, so cruising around the neighborhood need not be obnoxious. But like any big dog, it begs to be let loose.

This most powerful Camaro SS ever, according to Chevy, hits 60 mph in 4 seconds with the eight-speed automatic. With the six-speed manual in the test car, Chevy estimates 4.3 seconds. That’s the penalty for rowing your own and thinking man is better than machine.

The manual is worth the penalty. The gear stick manual is short and stubby, the shifting quick and direct. Unless you’re easy on the throttle. In an attempt to save fuel, at light throttle from a stop, as you shift to second, the car will redirect it to fourth. First to fourth is nothing I got used to in my week with the car. It could be a problem if you’re turning right or left from a stop sign and need to jump into the far lane to beat traffic then have a sudden lack of power. Then just start in second. Active rev matching paddles help to keep downshifts smooth.

The rear-wheel drive handling is composed; you can wag the rear with much more control than the buffoons in V-8 Mustangs crashing out of cars and coffee events. We weren’t able to track it but spent plenty of time on and off ramps grinning like lottery winners. It’s been over a year since we last drove the Mustang, so memory may favor the fresh, but the overall handling was more confidence-inspiring than the other muscle cars. At a decade old and aging, the Challenger is just so big and heavy. Camaro could be pushed harder, faster, better than Mustang and Challenger. And the steering wheel feels as if it were made for your hands.

The inside feels as if you got microsized inside one of those Hot Wheels, though. The high beltline and low roofline make for small windows and poor visibility, which has become as synonymous with Camaro as muscle cars are with midlife crisis. But the outside is striking enough to stand the test of time, as it has for classic Z28s. Tradeoffs.

Once inside, the cramped cabin sort of perfects itself. All the controls are within effortless reach so the driver can stay snug in the seat. The center console is thick, the seats narrow, but the orange stitching and uncluttered dash with circular vents maintains that Hot Wheels state of mind. GM’s layered vehicle info display takes a minute to understand but then it’s very easy to use, as is the touch screen and voice commands. The head-up display is excellent as well.

The rear seats are more for storage or for folding down than sitting anyone; toss your phone back there if the cupholders are in use. The trunk is huge, but the opening small. We had to jam our hockey bag in like we were stuffing our foot in a skate for the first time all season. Once inside there is plenty of depth for golf bags, suitcases, and the two passengers who couldn’t fit in the rear seats.

The Hot Wheels package may seem like an unnecessary money grab for a vehicle about to get refreshed for 2019, but all the badging and Hot Wheels track elements are reminders of a time when dreams were only as big as the imagination. Camaro is the payoff to all those Hot Wheels-inspired dreams.

Parting shot: This is no toy.