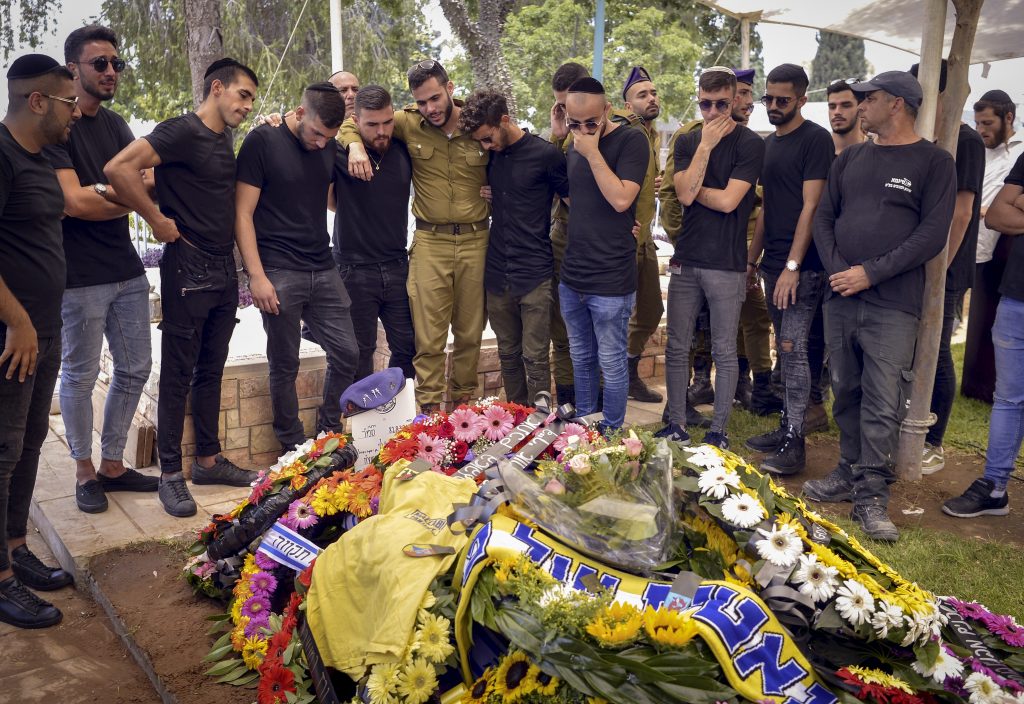 Aviv Levi, Hy”d, the IDF soldier killed by Hamas sniper fire on Friday, was laid to rest on Sunday in the military section of the Segula cemetery in Petach Tikva.

Family members eulogized the 21-year-old at a funeral attended by hundreds of mourners.

“It is not easy to eulogize a child. It is not natural,” said Levi’s father, Yaakov, to the crowd of mourners, Ynet reported.

“You were a ray of light for us, glowing and smiling. We loved to watch you grow into the man you became. You were the salt of the earth and paid the highest price because you excelled. You did not evade any task, big or small. You watched over your friends. We are not parting from you — you will be with us forever,” he said.

“He worried and looked after everybody,” his father said.

Levi’s uncle also emphasized the quality of someone who takes responsibility for the welfare of others.

“The battalion commander said that he trusted him no less than his commanders,” said Noam Levi.

Staff Sgt. Levi was the oldest of four siblings, yblc”t. His parents and two siblings were on vacation in Italy when they received the tragic news.

The military attache came to their hotel to notify them of Aviv’s death. The military representatives escorted them on the flight back to Israel.

Prime Minister Binyamin Netanyahu said that Levi fought terror in Gaza “with determination and bravery, and to our great sorrow, sometimes this struggle bears a very [heavy] price.”

“I am sending condolences from the bottom of my heart, on behalf of myself and on behalf of all Israeli citizens, to his family,” Mr. Netanyahu said in a statement.

“Levi fell defending the nation, the land and the residents of the Gaza periphery. My heart is with his family this evening. May his memory be blessed,” Defense Minister Avigdor Liberman wrote in a tweet.

He was the first IDF fatality on the Gaza front since Operation Protective Edge in 2014.

An initial investigation by the military indicates that Levi was hit by an armor-piercing bullet fired from an Iranian-manufactured rifle, Hadashot reported Sunday.

At the time of the incident, Levi was wearing the standard ceramic vest issued by the army to soldiers on duty in dangerous areas, but this type of bullet is capable of piercing it.

The IDF was reportedly aware that Hamas has such weapons, but since they are not in common use, a higher standard of armor is deemed necessary only in special operations.