Israel U.S. Negotiators: Rebuilding of Gaza ‘Up to Hamas’
Israel 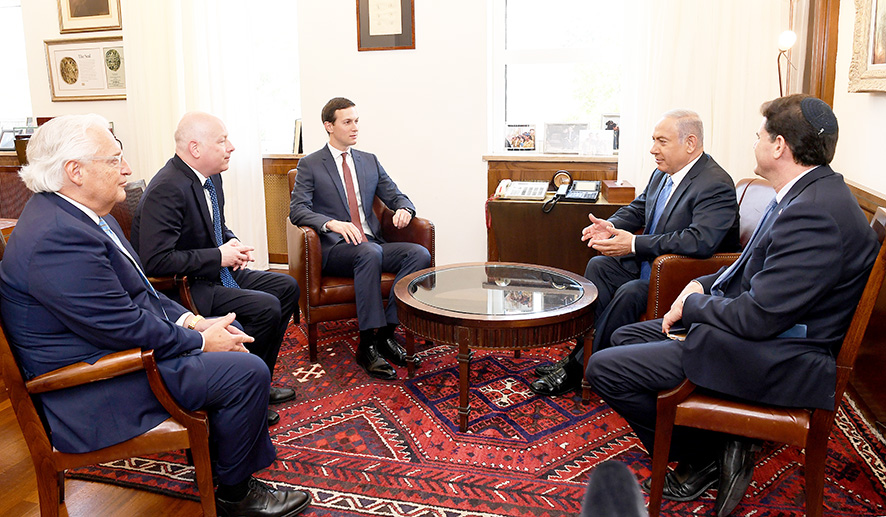 The United States is prepared to provide large amounts of money to help rebuild Gaza, but “it’s all up to Hamas” to stop its attacks on Israel, and demonstrate that it knows how to do positive things for the people of Gaza and not just to attack Israel, if Gazans are to receive that money. That’s the message that U.S. negotiating team Jason Greenblatt and Jared Kushner, along with U.S. Ambassador to Israel David Friedman, gave to the terror group during their recent round of talks in the region, the three wrote in an op-ed in the Washington Post Friday.

Their trip was “productive,” they wrote, but “one reality was painfully clear: The nightmare of Hamas’s leadership is continuing and needlessly prolonging the suffering of the Palestinian people in Gaza. Despite the billions of dollars invested for the benefit of Palestinians in Gaza over the past 70 years, 53 percent of the people there live below the poverty level, and the unemployment rate is a crippling 49 percent.” Whatever Hamas, which put itself in charge of Gaza, was doing with the money, it was not taking care of Gazans, they wrote.

A report earlier this month in Yisrael Hayom said that the United States is pursuing a plan to rebuild Gaza, leaving Hamas in power, in exchange for a “long period” of quiet on Israel’s southern border. The offer was made by President Donald Trump in coordination with Israel, Jordan, Egypt, and other countries.

The plan consists of a series of humanitarian, construction and social projects in Gaza, to be funded and supervised by Arab countries. The plan will be implemented even without the support of Palestinian Authority chief Mahmoud Abbas.

Hamas has been speaking to these Arab governments in recent weeks about the plan, the report said, adding that it is expected that the terror group will accept the plan, as it has shown that it, like Israel, would rather avoid an all-out confrontation.

“Seventy years after the founding of Israel, it would be wise for Hamas to acknowledge that the existence of Israel is a permanent reality,” the Friday op-ed said. “Almost all in the Middle East have come to accept this fact, and many even embrace it. At the expense of the Palestinian people, Hamas is fighting a morally bankrupt, decades-old war that has long been lost.”

“Hamas must immediately cease provoking or coordinating attacks on Israelis and Egyptians, and on infrastructure projects sponsored by donor nations and organizations,” they wrote. “Rather than looking for opportunities to weaponize everything from kites to mirrors in order to attack Israel, Hamas should focus its ingenuity on improving the Gazan economy. Rather than cynically attempting to exploit its barbaric holding of Israeli soldiers and citizens, Hamas must return them to their families. Instead of exploiting crossings such as Rafah and Salah al-Din to smuggle weapons and siphon off tax revenue for illicit purposes and personal enrichment, Hamas must hand those functions over in their entirety to the Palestinian Authority so that badly needed materials can get through to the people of Gaza. The international community stands ready to work with the Palestinian Authority on this vital effort.”