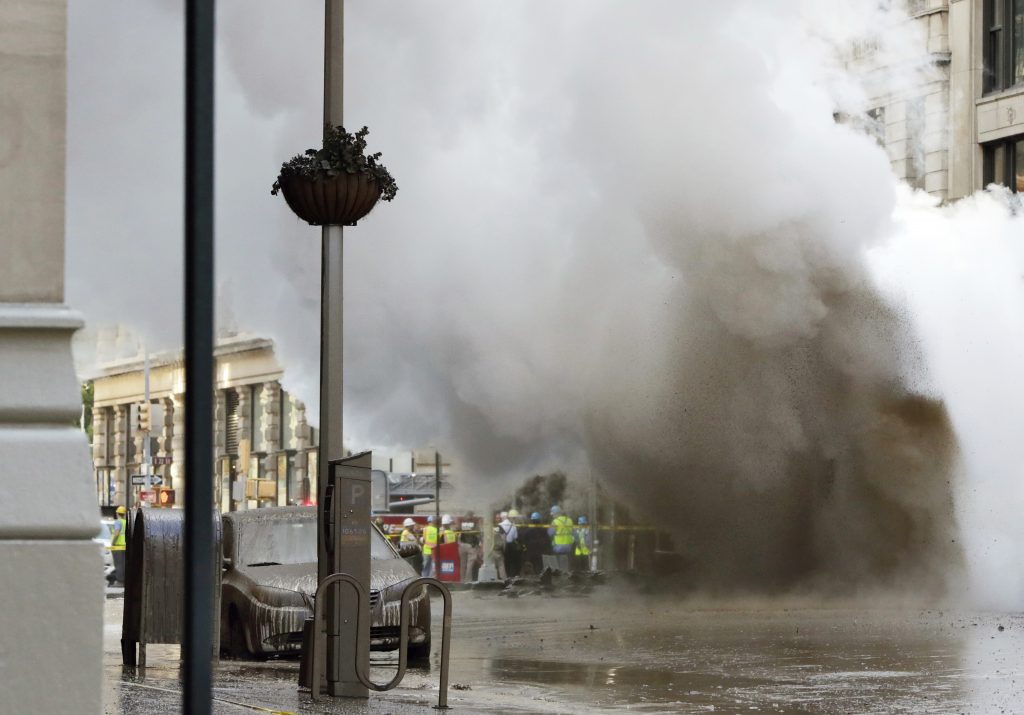 A nearly century-old steam pipe exploded beneath Fifth Avenue in Manhattan early Thursday, hurling chunks of asphalt, sending a geyser of white vapor 10 stories into the air and forcing the evacuation of 28 buildings.

Five people, including three civilians, suffered minor injuries from the 6:40 a.m. blast and officials warned people who may have gotten material on them to bag their clothes and shower immediately as a precaution because of the possibility of cancer-causing asbestos.

“The big problem we have to consider is asbestos,” said Office of Emergency Management Commissioner Joseph Esposito, who warned that if asbestos is confirmed at the scene, the cleanup could take days.

On a street near the blast site, firefighters stripped off their heavy outerwear, bagged it and entered a red decontamination tent in their gym shorts and t-shirts to take showers. Responders’ vehicles were hosed off.

The cause of the blast was not immediately determined. No work was being done on the pipe at the time.

Daniel Lizio-Katzen, 42, was riding his bike home to the West Village when he saw the plume from the high-pressure steam explosion.

“It was a pretty violent explosion,” Lizio-Katzen told the Daily News. “The steam was shooting up into the air about 70 feet. It was pushing up at such a high pressure that it was spewing all of this dirt and debris. The cars around were coated in mud. … It left a huge crater in the middle of the street.”

Brendan Walsh, 22, a senior at New York University, had just gotten off a train and was headed to class when he saw the plume and “a large scatter of debris. … I was standing behind the police line when a Con Ed worker came rushing over and screaming at police and firefighters to push everyone north because he was worried that there could be secondary manhole explosions.”

“Everyone — including the police and firefighters who were standing by — started moving back,” he said.

Businesses were braced for the worst as the response dragged on and police and firefighters blocked access to buildings close to the explosion, crippling their neighborhood and their workday. Subway trains were diverted around the blast area.

Similar explosions over the year have drawn attention to the aging infrastructure beneath the streets of the nation’s largest city. Fire Commissioner Daniel Nigro said the pipe that blew was installed in 1932.

More than 100 miles of steam pipe run beneath Manhattan, delivering vapor that powers heating and cooling systems in thousands of buildings, among other functions. The pipes share the crowded underground with subway and commuter rail tunnels, telecommunications and electric cable, and water pipes.

A July 2007 blast tore a deep crater in an intersection near Grand Central Terminal and sent a scalding geyser into the air, leaving one woman dead from a heart attack as she fled. Dozens of people were injured; some suffered horrible burns or had limbs severed.

The 2007 explosion happened after water accumulated in a manhole and traps that were supposed to have relieved pressure became clogged with sealant. Thursday was just a day after the 11th anniversary.