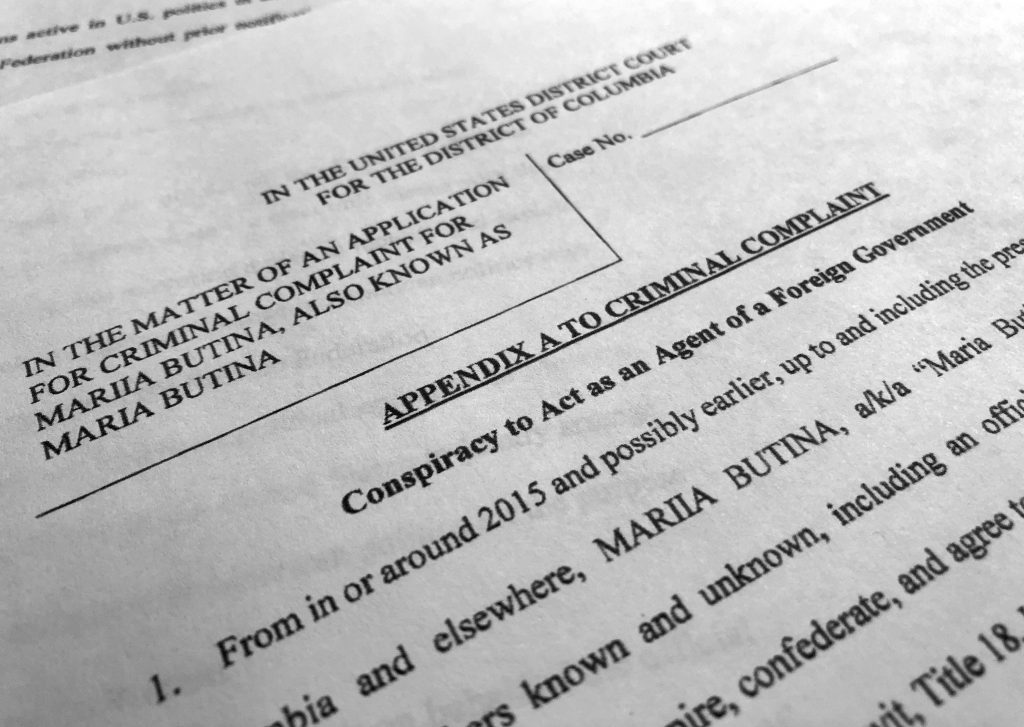 A federal judge on Wednesday ordered accused Russian agent Maria Butina jailed until her trial after prosecutors argued she has ties to Russian intelligence and poses a serious flight risk.

The Justice Department said Butina has been in contact with Russian intelligence operatives, and kept contact information for several Russian agents.

During a preliminary hearing in the U.S. District Court for the District of Columbia, the lead prosecutor in the case showed a photo of Butina meeting an alleged Russian intelligence agent at a Washington restaurant.

The government also displayed a copy of a handwritten note uncovered by the FBI at Butina’s apartment asking how to respond to an employment offer from a Russian intelligence agency, as well as a photo of her standing in front of the U.S. Capitol on the day Donald Trump was sworn in as president.

The 29-year-old former American University graduate student wore an orange prison jumpsuit and showed no emotion as her lawyer entered a not-guilty plea.

“We do not believe she was here … just to attend American University,” said Erik Michael Kenerson, the lead prosecutor, adding that Butina was engaged in a “covert influence campaign.”

Butina has been accused of working with a high-powered Russian official and two unidentified U.S. citizens, trying to infiltrate a pro-gun rights organization in the United States and influence the United States’ foreign policy toward Russia.

The gun rights group was not identified. However, her social-media accounts show she attended many National Rifle Association events and met with many top officials of the lobbying group.

One of those two U.S. citizens, identified in court records as “U.S. Person 1,” is facing a separate criminal fraud probe by the U.S. Attorney’s Office in South Dakota, Kenerson revealed at Wednesday’s hearing.

Butina’s attorney, Robert Driscoll, has said she is not a Russian agent and poses no flight risk, after she was arrested on Sunday without warning.

In a statement to reporters after the hearing, Driscoll said Butina wanted to send love to her parents and tell them she was OK. “While we respect the court, we strongly disagree that there were no conditions of release short of incarceration to detain an innocent student before trial,” he said.

During the court hearing, Driscoll said Butina had not fled the country despite multiple opportunities to do so.

Earlier this year, he said, she testified voluntarily about her activities for eight hours during a nonpublic hearing before the U.S. Senate Select Committee on Intelligence. He also revealed for the first time that she had received and responded to an inquiry by the Federal Election Commission in March 2018 concerning donations to a political campaign. He did not elaborate.