Business FOCUS: Tariffs on Mexico Are Causing Layoffs in the United States
Business 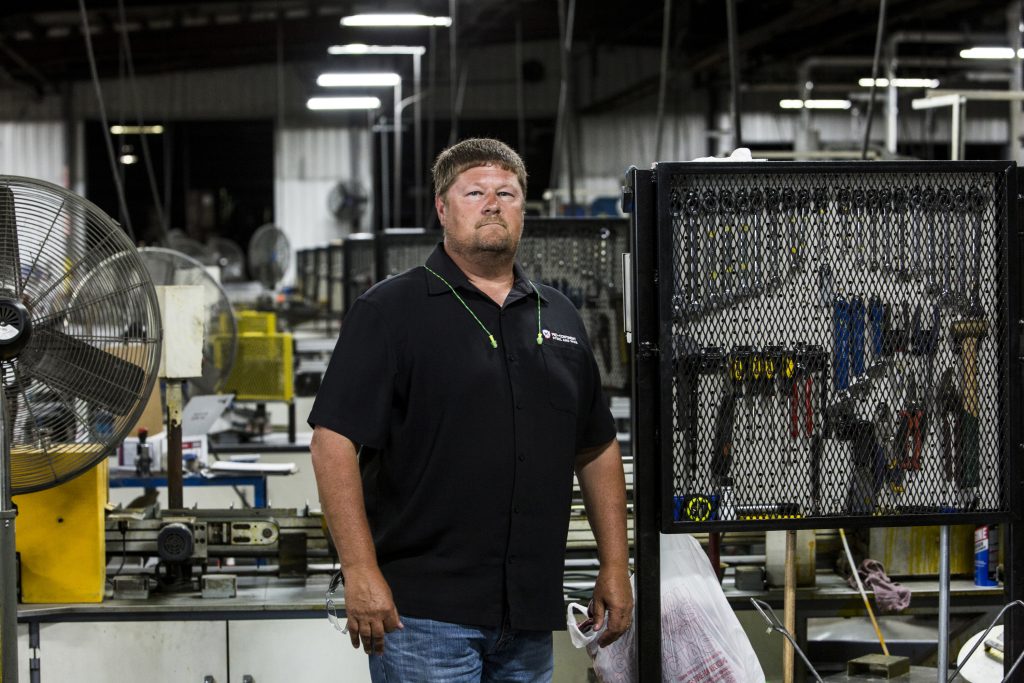 When a Mexican company brought Mid Continent Nail Corp. in 2012, workers at the factory here feared it was the beginning of the end. Their jobs, they suspected, would be given to lower-paid workers in Mexico, more casualties of the hollowing out of U.S. manufacturing driven in part by an embrace of global trade.

Instead, Mid Continent’s factory has doubled in size since Deacero’s purchase. The company, facing fewer restrictions on steel exports after the North American Free Trade Agreement, shipped steel into Missouri, willing to pay skilled workers more to take advantage of cheaper energy costs in the United States and a location that allowed swift delivery to U.S. customers.

But President Donald Trump has put 25 percent tariffs on steel imports, bumping production costs and prompting Deacero to reconsider this arrangement. With Mid Continent charging more for nails, orders are down 70 percent from this time a year ago despite a booming construction industry. Company officials say that without relief, the Missouri plant could be out of business by Labor Day – or that remaining production could move to Mexico or another country.

And so trade restrictions aimed at preventing U.S. jobs from heading to Mexico and elsewhere have instead hampered a Mexican company’s multimillion-dollar effort to create jobs in the United States – an unintended consequence of President Trump’s trade war that demonstrates the difficulty of attacking trading partners without hurting workers at home.

The layoffs have already begun. The company now employs fewer than 400 workers, down from about 500 before the tariffs took effect last month. Temporary contract workers have been let go. Some permanent workers have left for other jobs, in anticipation of a new wave of employment losses or the possible shuttering of the plant.

“We’re in a situation where we’re fighting against our own country,” said Chris Pratt, operations general manager at Mid Continent. “It seems like a battle we shouldn’t be having to fight.”

Deacero is trying to decide what it will do next. For now, it is using the steel it once exported to the United States in production facilities in Mexico, which make wire products for the domestic market. But the future remains hazy.

“Obviously, moving nail production to Mexico or another country is a possibility, but it is a bad alternative. Mid Continent does not want to move and is not planning to do so,” said company spokesman Jim Glassman. “The workers there continue to hope and expect that President Trump will save their jobs.”

Philip Bennett, 37, a machine repairman at Mid Continent, appeared close to tears as he talked about his 5-year-old daughter, Aubree, who has a congenital heart condition that has required multiple surgeries. He has health insurance through Mid Continent that covers her.

“There’s a lot of good things that he is doing. But he’s affecting me now, and I don’t appreciate it,” Bennett, a Trump supporter, said of the president.

“I mean, I don’t expect him to come down here,” he added. “It’d be nice – and see what he’s affecting, and see the people he’s hurting.”

But while workers in Missouri fear additional layoffs, not a single Mexican employee has been fired.

“The strength of the domestic market [in Mexico] has helped us,” Luis Leal, Deacero’s vice president of trade, said in a phone interview from the company’s headquarters in Monterrey, Mexico.

President Trump imposed tariffs on steel and aluminum imports June 1 by invoking a rarely used provision that permits the president to swiftly penalize imports on the grounds of national security. Combined with broader actions aimed at Mexico, Canada, the European Union, China and other trading partners, the tariffs represent a fulfillment of Trump’s campaign promises to, in the president’s view, rescue U.S. workers from what he termed the “American carnage” wrought by international trade deals.

While the 25 percent tax on steel imports has helped the domestic steel industry – the Commerce Department noted in a statement that several domestic steel plants have re-opened or expanded – it also raised costs for U.S. firms. Mid Continent used to sell a box of 50 nails for $27. Now, it tacks on $5.50 to cover the cost of the tariff, company officials said.

Firms can apply to Commerce for waivers from the steel and aluminum tariffs if they can show that the products they seek to import cannot be obtained in the United States in sufficient quantity or quality.

The process for getting those exclusions has been shambolic. Only after the tariffs were imposed in June did the agency begin training the roughly 30 evaluators who must review at least 21,000 relief petitions

Commerce said it would take a next step in reviewing the company’s application for exemptions by the end of this week, but the company still faces more hurdles before getting a final verdict.

The tariffs’ effects on Mid-Continent and Deacero demonstrates why economists broadly say protectionism can do more to damage the economy than to grow it. And experts say Trump’s trade policy risks dampening foreign investment in the United States, as firms hesitate to spend amid uncertainty about future trade rules.

Between 2005 and 2016, Mexican foreign direct investment in the United States quadrupled to $17 billion – financing that supported more than 123,000 American jobs.

The examples are visible across the United States, even if Americans don’t always realize when they are purchasing a Mexican product. Mexico’s CEMEX is now one of the largest cement companies in the United States. Grupo Electra owns Advance America, the biggest payday-loan company in the United States. Mexican baked goods company Bimbo now produces some of the United States’ most recognizable products, including Sara Lee apple pie and Entenmann’s muffins, and employs more than 20,000 people.

Those investments were driven by NAFTA, as well was by a liberalizing Mexican economy that prompted its entrepreneurs to look across the border for business opportunities.

Trump has repeatedly threatened to withdraw from NAFTA, and his administration is in negotiations with officials from Mexico and Canada to reorder the 1994 trade agreement.

“I think the last year and a half has been a shock,” said Andrew Selee, president of the Migration Policy Institute and author of a book about U.S.-Mexico relations. “I think the assumption was that, with NAFTA, this was an increasingly seamless economic zone that would continue on.”

As it waits to hear about exemptions, Mid Continent has found itself, unexpectedly and at times uncomfortably, at the center of a political fight over Trump’s trade war.

While other, larger companies such as Harley Davidson and General Motors issued warnings about upcoming moves, Mid Continent was among the first to cut jobs. And the firm’s executives have become part of a complex brew of trade policies and electoral politics.

Sen. Claire McCaskill, D-Mo., facing a tough re-election race in a state Trump won by 19 percent percentage points in 2016, seized on the company’s predicament, interrogating Commerce Secretary Wilbur Ross in a hearing on Capitol Hill last month. The next week, she was trailed by media outlets as she toured the company’s facilities despite blistering heat.

Under normal circumstances, the company would have ceased operating as the heat index soared above 105 degrees. Because McCaskill was expected, the workers kept working, as supervisors rotated them in and out of an air-conditioned break room. McCaskill, clad in a reflective safety vest, declared that “it’s time to end this reckless trade war.”

As McCaskill made the company a cause in her campaign to stay in office in Trump country, GOP lawmakers kept a lower profile on the issue as they attempted to square their support for Trump with the economic threats from tariffs that had begun to hit home.

A spokeswoman for McCaskill’s GOP opponent, Josh Hawley, the state attorney general, said in a statement that Hawley “supports the president’s goal to get better trade deals and stop trade cheaters, like China,” but that Mid Continent “makes a good case for an exemption and we have spoken to the White House about it.”

Amid the debate about Trump’s tariffs, the company has come under new scrutiny as well.

For years, Mid Continent and Deacero have fought their own mini trade wars.

In its statement, Commerce noted Deacero has since 2009 faced accusations that it is “dumping” steel – a trade practice that involves undermining competitors by selling a product in a foreign country at a below-market price.

Glassman, the Mid Continent spokesman, said previous interactions between Commerce and Deacero were “utterly irrelevant” to the company’s request for an exclusion from the tariffs.

Mid Continent has also at times asked for government intervention in dealing with foreign competition. The business has successfully filed trade cases against countries around the globe including China, Korea, Oman and Malaysia, accusing them of “dumping” nails into the U.S. at below-market prices, according to company officials.

Now, one rival is objecting to Mid Continent’s bid for an exemption from the new tariffs.

Roger Aurelio, who runs a much smaller nail sales business in Griffith, Indiana, that resells nails from Mid Continent and other manufacturers, said Mid Continent has told only part of the story in its media blitz. Aurelio argued that Mid Continent has not been transparent about the fact that despite being located in Missouri, it is a Mexican-owned company, and that its products stamped “Made in America” are manufactured largely from Mexican steel.

Aurelio also contends that if Mid Continent is granted exclusions to continue to import from Mexico, that would put it on an unfair footing compared with its competitors.

Mid Continent, Aurelio argued, is trying to “get a free situation under the tariffs when it’s not even United States-owned.”

Mid Continent officials countered that Aurelio, who sells nails but does not manufacture them, benefits from the tariffs that are burdening Mid Continent because he gets higher prices for his nails. And a company spokesman strongly disputed Aurelio’s assertion that it is in any way denying its ties with Mexico.

“Mexican investors bought Mid Continent in 2012, made major capital investments and spent large sums fighting unfair Asian competition,” Glassman said. “The result is the largest U.S. nail manufacturer with – before June 1, anyway – more than 500 employees, nearly double the workforce of five years ago. These workers are Americans. They have American families. If they lose their jobs, those jobs will be American jobs.”

Meanwhile, Mid Continent’s prominence put company officials in the spotlight, and some became targets of harassment from foes of Trump. Pratt, who declined to say whom he supported for president, said he has begun receiving dozens of calls a day from all over the country questioning his politics.

The messages, Pratt said, were to the effect of: “You voted for Trump, how do you like him now?”