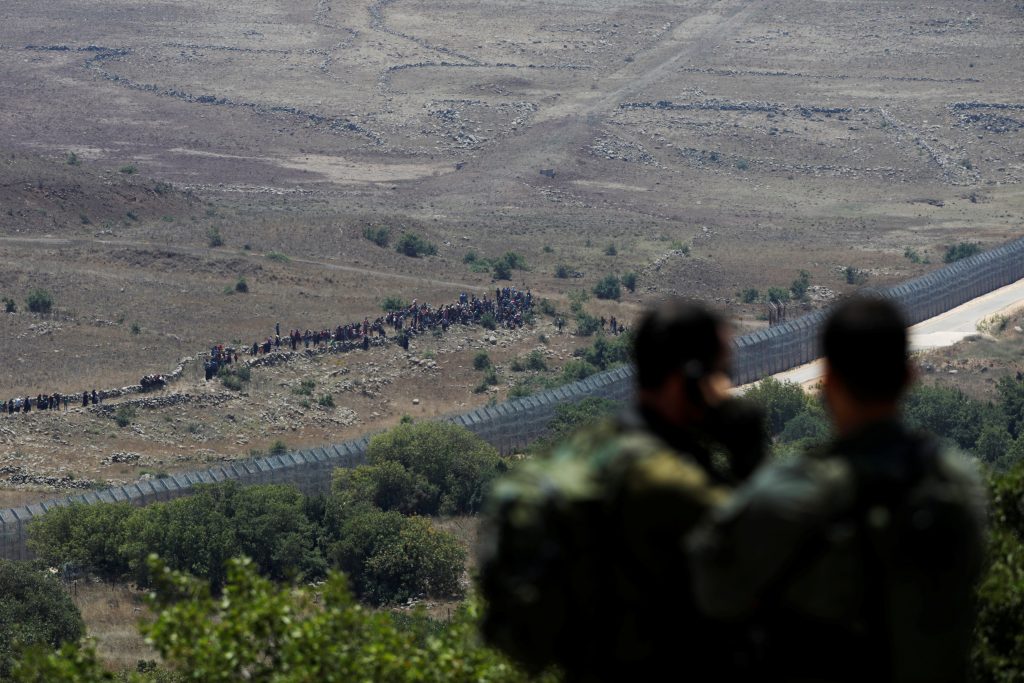 Dozens of Syrians approached the Israeli frontier on the Golan Heights on Tuesday in an apparent attempt to seek help or sanctuary from a Russian-backed Syrian army offensive, before turning back after a warning from Israeli forces.

Tens of thousands of Syrians have arrived near the frontier with the Israeli Golan Heights in the past month, fleeing a rapidly advancing offensive that has defeated rebels across a swath of territory near Jordan and Israel.

“Go back before something bad happens. If you want us to be able to help you, go back,” an IDF officer on the Israeli side of a frontier fence told the crowd in Arabic through a megaphone. “Get a move on.”

The offensive has triggered the single biggest displacement of the war, with several hundred thousand people uprooted. Both Israel and Jordan have said they will not allow Syrians to cross into their territory.

Israel has given humanitarian aid to refugees in encampments close to a 1974 Israeli-Syrian disengagement line. Many of the displaced are sheltering within the disengagement zone that is monitored by a U.N. force.

The Syrians who approached the frontier fence stopped some 200 yards away, before an IDF soldier told them to leave.

“You are on the border of the State of Israel. Go back, we don’t want to hurt you,” the soldier shouted in Arabic through a loudspeaker at the crowd, live Reuters footage showed.

The crowd, which included women and children, then walked back slowly toward the refugee encampment. Some stopped midway and waved white cloths in the direction of the Israeli frontier.

The Russian-backed offensive has advanced swiftly, unopposed by President Bashar al-Assad’s foreign adversaries. The United States, which once armed the southern rebels, told them not to expect it to intervene as the attack got under way last month.

A witness on the Syrian side of the Golan frontier said the sound of bombardment was drawing ever nearer. The United Nations said last week up to 160,000 Syrians had fled to Quneitra Province, some in close proximity to the Golan area.

Israel has threatened a harsh response to any attempt by Syrian forces to deploy in the disengagement zone, complicating the government offensive as it draws closer to the frontier.

Israel does not want its enemies Iran and Hezbollah, both allies of Assad, to move forces near its border.

Russian President Vladimir Putin, speaking alongside U.S. President Donald Trump on Monday, cited the need to restore the situation along the Golan borders to the state that prevailed before the outbreak of the Syrian war in 2011.

At least 14 people, including five children and some women, were killed when Syrian government forces dropped a barrel bomb on the village of Ain al-Tineh 6 miles from the Golan frontier, according to UOSSM, a medical-aid charity that operates in the area.

Ahmad al-Dbis, UOSSM safety and security manager, said another 35 people had been wounded in the attack, which he said had hit a school. The casualties had fled to the village from nearby parts of the southwest.

Syrian state media broadcast from a hilltop captured from rebels on Monday and overlooking the Golan frontier. Government fighters waved rifles and held aloft pictures of Assad as they celebrated on camera from the location, al-Haara hill.

“We will liberate all Syria,” said one of the soldiers.