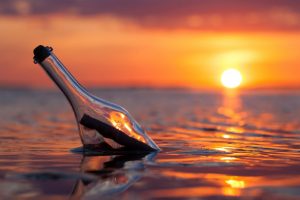 Humanity seems to have a soft spot for long-lost, hidden messages. There is something about finding that note in the bottle washed ashore after decades adrift in the endless expanse of ocean blue that ignites the imagination. Of course, if you park yourself by the beach looking for treasure, you’re much more likely to find a sunburn and salt-encrusted feet than any stored-away message from long ago. But there will inevitably be those “lucky few” who happen upon the mysterious communiqué, even sans the sands. And that’s just what recently happened to Alex and Jessica Monney of San Jose, California. Behind something that their contractor tore off the wall in the process of remodeling their bathroom, a discovery was to be found: a 23-year-old message from their home’s previous owners. The note bore a picture of the previous owners with a speech bubble that read, “Hi! We’re the Shineskis! We remodeled this bathroom Summer 1995. If you are reading this, that means you’re remodeling the bathroom again. What’s wrong with the way we did it?!?!?” In addition, the note featured a picture of the Shineski’s pet rabbit, with its own speech bubble: “Hi! I’m Cassie the Bunny Rabbit. I lived here too! … I’m going to be the next Cadbury Bunny.”

While the Good News Network and McKinley Corbley who reported this cute human-interest piece seemed to just appreciate the novelty and good feel of this story — and Twitter users who saw the tweet about it were mostly just curious if Cassie the Bunny Rabbit really ever did fulfill her dream of becoming the Cadbury Bunny — I personally could not help but be struck by the content of the message itself. In all probability, the Shineskis meant their comment as a cute joke, but for frum Jews who are educated on the foundations of Torah and mussar, one almost cannot help but hear a ringing charge: “What’s wrong with the way it is already?!?!?” Why do you feel a need to improve and upgrade?!”

In addition to a universal appreciation for the mystique and charm of messages tucked away from a faraway place or time, humanity seems to have another common quality: We love to renovate. To expand. Remodel. Improve. But why? After all, unless something is really in a state of disrepair, what’s wrong with the way it is now?

Rabbi Fischel Schachter once related (I hope it was just a joke and not a true story) that a fellow popped in on his next-door neighbor while the latter was discussing his kitchen renovation plans with the interior designer. “I just wanted to let you know,” the visiting neighbor opined, “that my favorite color for marble countertops is green.” Answering the unspoken question barreling out of the bulging eyes of both homeowner and designer alike, the neighbor explained, “Look, you’re anyway just remodeling so that I should see what a gorgeous kitchen you have, so you may as well choose my favorite color.”

Yes, that motivation probably does exist, as Shlomo Hamelech says, “I have seen all toil and all expertise of action, and it is the jealousy of one man of another, and this is also futility and malevolent spirit,” (Koheles 4:4) but it would be nice to hope that impressing or outdoing others is not the only motivator that drives people to upgrade their furnishings. In fact, Chazal’s statement in the Midrash on Koheles, “When a person dies, he doesn’t have even half of his desires in his hands,” seems to indicate that the incessant drive for more, bigger, and better is inherent to the human condition. “One who has 100,” Chazal elaborate, “strives and works to expand it to 200.”

And this begs the question, why are we like this? What is it about us that we feel forever driven for more, bigger and better?

One could surely approach this question from numerous angles, and I think one explanation is that Hashem created us this way because we are in this world for a mission. We are not meant to just pass through, enjoy the scenery, and then exit the ride when we are done. We are here to work, strive, and accomplish. The question, of course, that each and every one of us needs to ask ourselves is — accomplish what? There is nothing wrong with renovating, expanding, or upgrading. Whether it’s a car or a kitchen, some furniture or a fedora. At the same time, it’s worthwhile pondering when, where, and in what endeavors, we can most efficiently apply our drive for more, during our relatively short sojourn here on Planet Earth. As my Rebbi, Harav Moshe Twersky, Hy”d, once put it, “The quest for more in the realm of materialism is actually a diversionary tactic of the yetzer hara, because, in reality, it is spiritual pursuit for which the drive for endless expansion was created.”