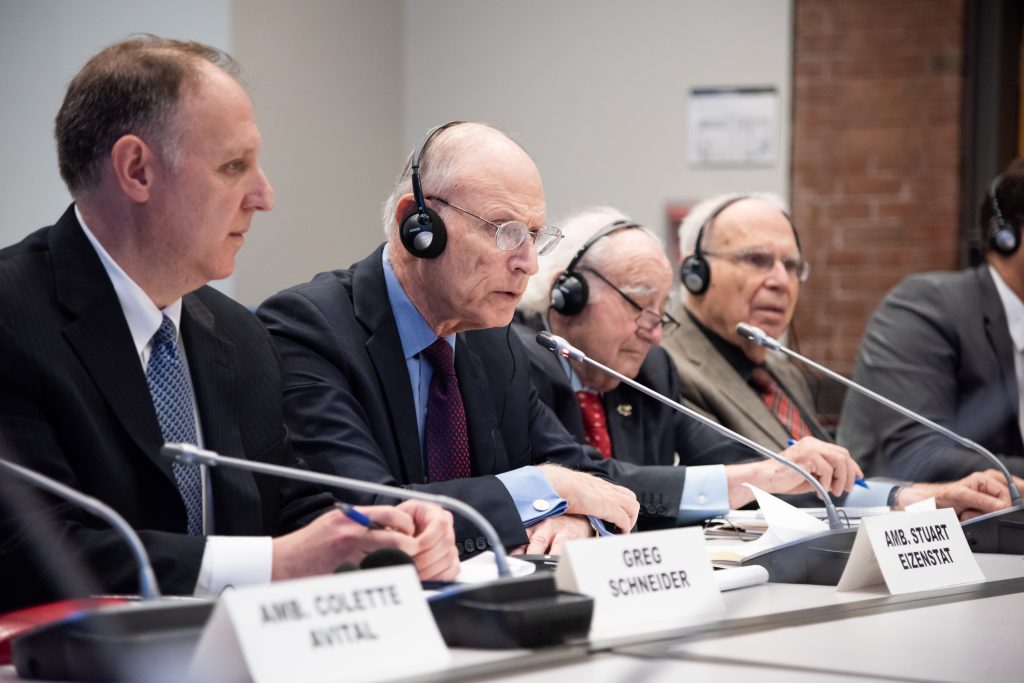 The German government has agreed to pay nearly $88 million more than in previous years to fund social services for Holocaust survivors worldwide. The amount was agreed upon following a round of negotiations held between German officials and representatives of the Jewish Material Claims against Germany, known as the Claims Conference, held this year in Washington, D.C., and represents a new stage of reparations payments as the number of survivors dwindle while their need for care increases.

A large portion of the newly granted funds will go to pay for home care for ailing survivors, a service that Claims Conference president Julius Berman told Hamodia is a necessity for this unique demographic.

“It may very well be cheaper to put elderly people with heavy care needs into nursing homes, but that’s not something you can do to survivors,” he said. “They were taken away from their homes once already and put into institutions. Even though the circumstances here are obviously very different, it’s still something that is very traumatic for most of them, so it’s critical that we do what we can to keep them at home with their family, friends and neighbors around them.”

The Claims Conference has been funding home care since 2004. They currently fund in-house services for over 76,000 frail survivors. The organization also finances other services for some 62,000 others including providing food, medicine, transportation to medical facilities, and programing aimed at alleviating social isolation.

The increase will bring the total funding allocations awarded through the Conference to $564 million in 2019.

Other changes agreed upon during the negotiations were an increase in funding for pensions paid to survivors from Central and Eastern European countries that are presently allotted to 55,000 individuals. Germany will begin to pay more over the next three years, bringing the amount from the present level of $411 million to $633 million.

Additionally, the parties agreed to relax the criteria for recipients of the Child Survivor Program, lowering the length of time required to have been spent in hiding from six to four months.

The funds will be distributed globally and will not be available until 2019, but in the short time since additional payments were secured, the Conference has told organizations providing home care to survivors that they will be informed in the coming months as to whether they will be receiving increased allotments.

Rabbi Avi Fishof, director of the Boro Park-based Bikur Cholim Chesed Organization, said that his organization’s home-care program for survivors currently services over 450 individuals, but does have a “small waiting list” of those they have not been able to accommodate. He added that there are also many survivors in the program who could benefit from additional hours of home care.

“We are very passionate about doing everything we can for the survivors we serve and would be very happy if this means that we could do more for them,” he told Hamodia. “After what they have been through, we want to do what we can to keep them as comfortable as possible in their homes and out of nursing homes.”

Germany has been paying indemnifications to survivors through the Claims Conference since 1952 and since then has paid out more than $70 billion.

Each year, the Claims Conference holds negotiations with members of the German government in a different location. This year the meeting took place in the United States Holocaust Museum. Yet, internal shifts in German Chancellor Angela Merkel’s government have put several new officials in key positions in the ministries of Foreign Relations and Finance charged with hammering out the details of payments with the Conference.

The changes on the other side of the negotiatin table presented a fresh challenge to the Conferences team led by special negotiator Ambassador Stuart Eizenstat and Conference Vice President Greg Schneider.

“There was a real learning curve,” said Rabbi Berman. “We’ve been used to dealing with the same people year in and year out for a while now, but this was an educational process.”

Using the Museum as a backdrop, members of the German negotiation team led by State Secretary for Finance Dr. Rolf Bösinger heard testimony from two survivors and visited with other survivors — in their homes — who currently receive home care and other social services with funds allocated by the Claims Conference. In addition to setting historical context, the needs and technical challenges of the present generation of survivors needed to be clarified in order for negotiations to proceed effectively.

“Everybody in Germany learns about the Holocaust and these civil servants that we dealt with are keenly aware of their historical responsibility, but in fairness to them, they came to the table with a certain skepticism. It didn’t make sense that the number of survivors is decreasing so rapidly, but the overall financial need is going up,” said Rabbi Berman. “That’s where we had to fill in the gaps and show that the older the population gets, the more expensive their needs are. So, yes, sadly the need will eventually go down, but right now, it’s higher than ever.”