Community FINLAND: Religious Freedom in the Land of the Midnight Sun
Community 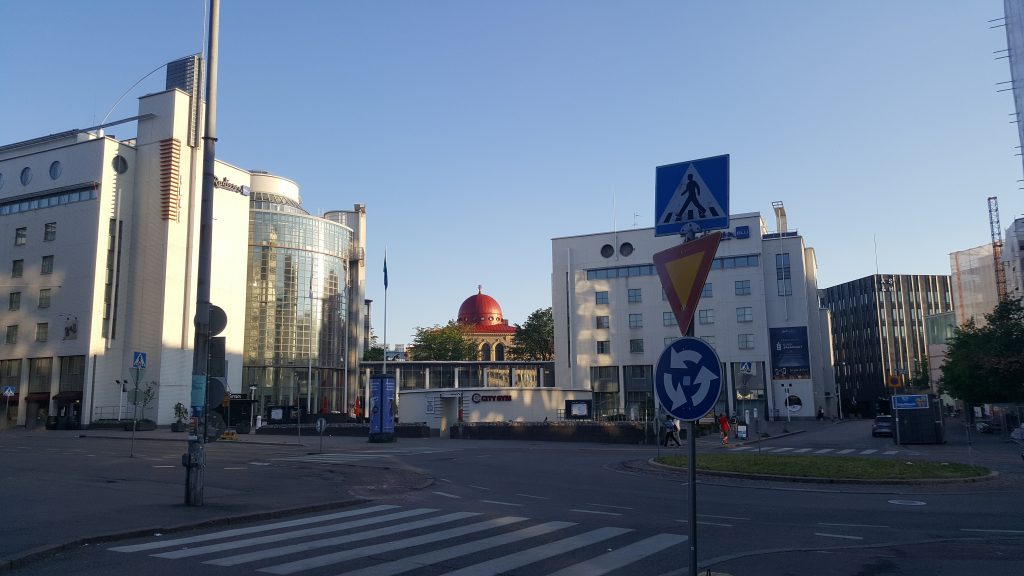 While in Helsinki, Finland, to cover the historic summit between President Donald Trump and President Vladimir Putin for Hamodia, I took the opportunity of visiting the synagogue and discovering a little more about the Jewish community here. July is holiday season in Finland and the rabbi, Rabbi Simon Livson, was away on vacation, so the president of the shul, Mr. Yaron Nadbornik kindly spoke to me about the kehillah.

As his name suggests, Mr. Nadbornik is of Russian origin. His great-great-grandfather, in common with many of the first members of the Jewish community here, was a Cantonist. Having spent many of the years till he was 18 in a Russian military school, he then served for 25 years in the Russian army. At that time, in the early nineteenth century, Finland was ruled by Russia (having previously been ruled by Sweden, where Jews were only allowed to live in three towns) and on his release, he was allowed to remain there. These brave young men, who had retained their Jewish identity against terrible odds, were the beginning of the Jewish community in Finland. They were still subject to restrictions on where they could live and the occupations in which they could engage, until 1917, when Finland became independent and Jews finally gained all civil rights.

There are currently around 2,000 Jews in Finland. Most of them live in Helsinki, where the synagogue has about 1,000 members, and another 100 or so live in Turku where the other shul in Finland is situated.

The community has a fairly young profile with about 80 percent of the Jewish community aged under 65. In Helsinki there is a Jewish kindergarten for ages three to six, and a school for ages seven to 15, which follows the Finnish national curriculum, supplemented by daily tefillah, limudei kodesh and learning Ivrit. The children are provided with a kosher breakfast and lunch in school. Mr. Nadbornik describes the school as a “free private school,” in which the government funds the secular studies and the Jewish community supplements the budget with a contribution for limudei kodesh. Classes are small, with around ten children in each year group. While many of the young people choose to study in Israel after they leave school, they generally return to Finland. The community is fairly stable in size and while some young people leave to go to university abroad, there are also people who decide to come and live in Finland from other countries such as Hungary.

The community members in Helsinki are traditional, rather than strictly observant. There is a daily Shacharis in the shul, which gathers a minyan, according to Mr. Nadbornik about three days out of five. He tells me that the impact of the holiday season in July is such that they do not even try to have a minyan. During the week, davening takes place in the synagogue’s beis hamedrash, and on Shabbos in the main shul. There is a service on Friday night and Shabbos morning, attracting about 50 or 60 people. Rosh Hashanah and Yom Kippur draw a larger crowd and the 600-seat shul is generally full at those times. Mr. Nadbornik describes the shul as “Modern Orthodox with a standard Litvish nusach.”

Despite its small size, the community has all the necessary facilities, with a mikveh taharah, a chevrah kaddisha and a beis olam. Members of the kehillah pay 2 percent of their income as shul fees, which fund the shul and the school. There is no shechitah in Finland, so kosher meat is imported from elsewhere in Europe, but Mr. Nadbornik tells me that a few years ago a shochet came from Ukraine and shechted reindeer, which are apparently very tasty. There are now two online kosher shops, which will deliver meat and other kosher food, as well as two cafés in Helsinki, which are under local kashrus supervision.

A unique aspect of Jewish life in Helsinki, which provides some interesting issues, is the extreme length of the days or nights, due to its northerly latitude. Mr. Nadbornik says, “In the summer Shabbos starts very late. People typically make havdalah on Sunday morning, as otherwise it would be well after midnight.

“On the other hand, in the winter, Shabbos starts very early, and the earliest candle-lighting time is at 2:30 p.m. This means that one needs to leave the office at around 1 p.m. and prepare for Shabbos already on Thursday evening in order to make it on time. So yes, keeping Shabbos can be quite challenging at these latitudes.”

Finland has compulsory national service for men, either in the military or in civilian service. Some 80 percent of Finnish men go into the army and this is the same in the Jewish community. Both Rabbi Livson and Mr. Nadbornik served in the army. I ask Mr. Nadbornik what this was like and he laughs and says, “The cook certainly remembers me!” There is no kosher food provision in the army, but vegan food is available, and, as in Finland in general, there are very few issues of anti-Semitism. Mr. Nadbornik said that one can walk around freely wearing a kippah, and he personally has never experienced any issues, for example, in his workplace.

There are around 80,000 Muslims in Finland, of whom some 15,000 are of Somali origin and five to 10,000 from Iraq and other places in the Middle East. The remainder are from places such as Bosnia and Turkey. The Muslim community dates back to the same era as the Jewish community, with its founders being Russian Muslims from areas such as Kazan, who were also conscripted into the Russian Army. In fact the first shul and the first mosque, built in the 1870s, were part of the same complex. The two communities have a good relationship and the communal organizations are part of the National Forum for Cooperation of Religions in Finland, of which Mr. Nadbornik is a vice president. The Forum promotes societal cohesion, on the basis that people who are well-grounded and secure in their own religion are less likely to be antagonistic to people of other faiths.

During the Second World War, Finland fought, as Mr. Nadbornik says, three wars – two against Russia and one against Germany. Before the outbreak of WWII, at the beginning of 1939, the Russians invaded Finland in what was to become known as the Winter War. Between 1941 and 1944, Finland fought with the Axis powers against the Russians, and by 1944, Finland had signed an agreement with the Allies and fought against Germany. During Operation Barbarossa, in 1941, German troops stationed in Finland fought against the Russians. However, although Finland was allied with Germany for a while, there were no large-scale moves against the Jewish community. In fact, no Finnish Jews were deported at all. In November 1942 eight Jewish refugees were deported and the outrage was such that this appeared on the front page of all the newspapers the next day. There were no further deportations. It is generally held that this was due to Finnish opposition to the idea, but Mr. Nadbornik offers a somewhat different perspective based on a recent history of Jewish Finland. He said that there were a number of ethnic minorities in Finland as well as Jews, such as Roma and Swedish-speaking Finns, as well as people with different political views. In order for the country to function properly during the tense war years, it was essential for national unity that everyone felt secure. Therefore, he says, it was crucial that the Jews not be betrayed, as otherwise everyone else would have worried that they would be next,

I ask Mr. Nadbornik how the Jewish community feels about the summit. He says that, in general, some people are fans of Mr. Trump and others are not. With regard to Mr. Putin, he explains that everyone knows that Russia will always have a strong leader, so Mr. Putin’s behavior is no surprise. He says that he hopes the summit between the two presidents went well, but he has no great expectations of any concrete results.

Given Finland’s complex relationship with Russia, are there current concerns of Russian expansionism? Mr. Nadbornik says there are always concerns about that. He tells me that when Russia first moved into Ukraine several years ago, all the army reservists received notification of where they should report to their unit were the situation to threaten Finnish security. Fortunately this was not the case.

It was very interesting speaking to Mr. Nadbornik and Hamodia would like to thank him for his time and the insight into this small, historic and vibrant community.