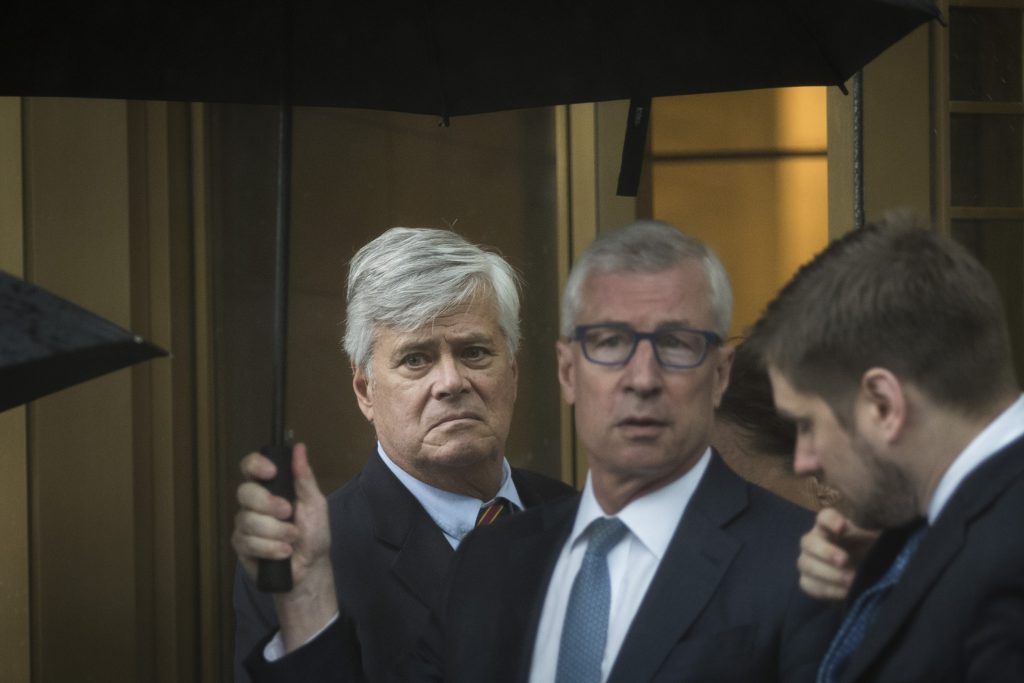 Former New York state Senate leader Dean Skelos and his son Adam were convicted on Tuesday of extortion, wire fraud and bribery charges of pressuring businesses to give Adam no-show jobs or else risk losing the powerful Republican’s political support.

A jury in federal court in Manhattan deliberated over the course of four days before reaching the verdict. The top count, extortion, carries a maximum sentence of 20 years in prison, but they are likely to receive far less time.

Prosecutors in the Skelos trial had told jurors that the father and son were “partners in crime” who showed such blatant disregard for conflicts of interest that they broke the law. They accused the pair of extorting roughly $300,000 in payments from wealthy business executives who were dependent on the Long Island senator’s backing on legislation benefiting their financial interests.

The companies felt “constant pressure from Dean Skelos — the fear he would punish them by using his official power if they didn’t pay up,” Assistant U.S. Attorney Thomas McKay said in closing arguments.

The evidence included a wiretap recording of a phone call in 2014 in which Skelos boasted to his son that in his position as Senate leader he would “control everything,” including which bills would come to the floor for a vote.

“Everybody’s going to know who calls the shots, Adam,” he said. “Believe me.”

Dean and Adam Skelos and their lawyers declined comment as they left the courtroom Tuesday.

The defense portrayed the elder Skelos as a doting father who was merely trying to look out for a son struggling to find employment and pay for a $675,000 home. His lawyers argued there was no evidence that the ex-senator took any official action for the businessmen.

Skelos, 70, testified in his own defense, claiming there was never a quid-pro-quo expected when he reached out on behalf of Adam, 36.

Among the government witnesses was Anthony Bonomo, an insurance company CEO who described how Adam Skelos stopped turning up for a $78,000-a-year sales job he gave him. Even so, he didn’t consider firing him because he “didn’t want Adam’s problem to become a wedge for our legislative pursuits in Albany. I just didn’t want to have a problem with the senator.”

Robert Gage, who represented Dean Skelos, said in his closing arguments that the government witnesses weren’t credible because they were testifying under non-prosecution agreements.

Bonomo, who knew Skelos socially for several years, “was a friend looking out for a friend’s son,” Gage said. “There’s no extortion or bribery going on.”

It was the second trial for the father and son. They were convicted in 2015 of extortion, conspiracy and bribery, but a new trial was ordered by a federal appeals court in Manhattan after the U.S. Supreme Court narrowed the law regarding public corruption as it reversed the conviction of former Virginia Gov. Bob McDonnell.

The sentencing is scheduled for Oct. 24. After the first trial, the father was sentenced to five years and the son six, but they never spent any time in prison.