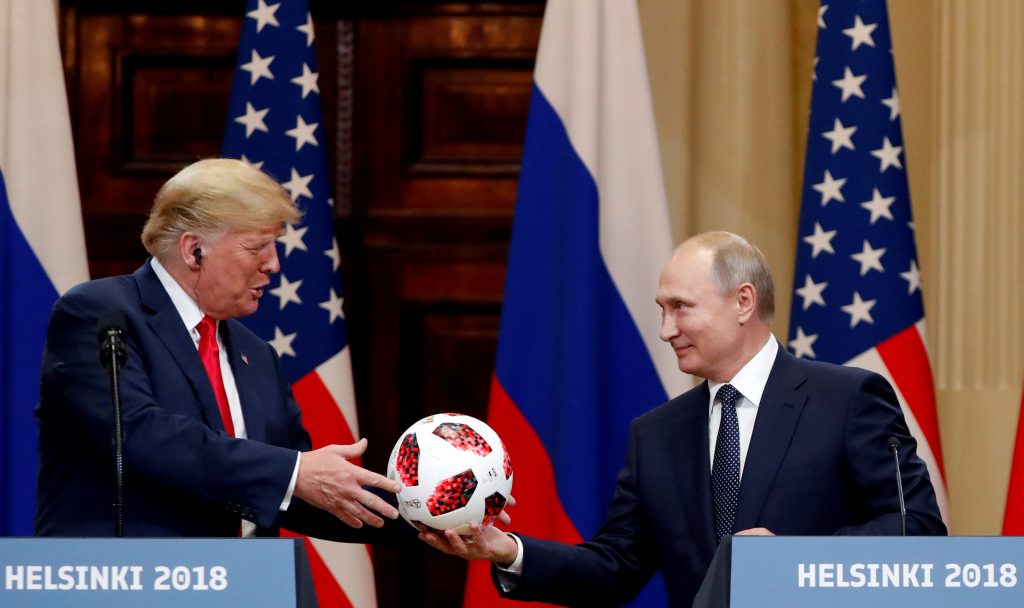 Appearing at a joint news conference with President Putin after the talks in the Finnish capital ended, Trump said in opening remarks that he and Putin discussed their disagreements “at length.” He added: “Our relationship has never been worse than it is now. However, that changed, as of about four hours ago.”

He said he also “spent a great deal of time” talking about Russian interference in the 2016 U.S. presidential election.

The summit began hours after President Trump blamed his own country, rather than Russia, for the hostilities between their two nations.

Speaking first at the news conference, President Putin said the talks took place “in a frank and businesslike atmosphere,” adding: “I think we can call it a success.” He said that although bilateral relations have been “going through a complicated stage,” there was “no solid reason” for that. “The Cold War is a thing of the past,” he said.

He added later that Trump “mentioned the so-called interference of Russia in the American election” in 2016. Putin again denied any involvement by the Russian state and said any evidence of interference can be analyzed through a joint working group on cybersecurity.

In response to questions, Trump subsequently said that both countries were to blame for the deterioration of relations. “I do feel that we have both made some mistakes,” he said. He added that “there was no collusion” between his campaign and Russia, and he lamented that the special counsel’s investigation into the matter has had an impact on U.S.-Russian relations.

“I think the probe has been a disaster for our country,” he said. “It’s ridiculous what’s going on with the probe.”

Shortly before the news conference began, security personnel forcibly removed a journalist who was holding a sign reading, “Nuclear Weapon Ban Treaty.” Before he was removed, he had been heckling TV reporters doing their stand-ups.

Seated alongside President Putin to deliver opening remarks before reporters at the start of the summit, President Trump congratulated Russia on successfully hosting the World Cup soccer tournament, which concluded Sunday, then noted that the United States and Russia have “not been getting along too well for the last number of years.” He said he hoped that would change and that “I think we will end up having an extraordinary relationship.”

“Getting along with Russia is a good thing, not a bad thing,” Trump said, as Putin slouched in his chair. Trump added that the “world wants to see us getting along.”

Trump did not mention Russia’s interference in the 2016 presidential campaign as one of the topics to be discussed before the meeting began.

Putin, who spoke before Trump made his opening remarks, said to the U.S. president: “Of course, the time has come that we speak extensively about our bilateral relations and various problem points around the world. There are enough of them that we ought to pay attention to them.”

The meeting began later than originally planned, after the perennially tardy Putin arrived in Helsinki well behind schedule, keeping Trump waiting. The one-on-one meeting lasted about two hours, longer than anticipated. It was initially scheduled to take 90 minutes.

The two leaders then went into an expanded meeting that included top aides. At the start of it, Trump, responding to a shouted question from a reporter, said: “I think it’s a good start. Very, very good start for everybody.”

Although most U.S. officials argue that Russia’s interference in the 2016 U.S. presidential election, use of a nerve agent on British soil and aggression in Ukraine and Syria have worsened relations, Trump instead faulted “U.S. foolishness and stupidity” in tweets Monday morning, as well as the expansive Justice Department investigation into Russia’s election intrusion.

“Our relationship with Russia has NEVER been worse thanks to many years of U.S. foolishness and stupidity and now, the Rigged Witch Hunt!” Trump tweeted Monday morning as he prepared for his meeting with Putin.

Trump is facing immense pressure to aggressively confront Putin over Russia’s election interference, especially after the Justice Department indicted 12 Russian intelligence officials Friday and charged them with hacking and stealing Democratic emails as part of a broad subterfuge operation that U.S. intelligence agencies believe was ordered by Putin to help elect Trump.

But Trump’s comments Monday were in sync with the argument Putin and his government have long made, which is that the policies of the Obama administration — as well as the investigation into election interference, which Putin has repeatedly denied — inflamed tensions between the two nuclear superpowers. The Russian Foreign Ministry’s official Twitter account retweeted Trump’s “U.S. foolishness and stupidity” tweet and said, “We agree.”

President Trump — who has been reticent to criticize President Putin and has said he admires the Russian autocrat’s leadership style and strongman image — began their meeting shortly after 2 p.m. (7 a.m. Eastern time) at the Presidential Palace, a neoclassical residence facing Helsinki’s heavily touristed Baltic Sea waterfront. They were originally scheduled to meet at 1 p.m. (6 a.m. ET).

But Putin arrived later than expected in Helsinki on Monday and did not disembark from his plane until after 1 p.m., delaying the scheduled start time of the summit. Putin is known for his frequent tardiness; he once made President Barack Obama wait 45 minutes for one of their meetings.

The two leaders first met alone, with interpreters present but without their advisers. They were then joined by their delegations for a working lunch, which was to be followed by a joint press availability. Trump then will fly home to Washington.

Earlier in his Europe trip, Trump told reporters he would raise the election interference issue with Putin, although he indicated that he would not be too stern, saying he assumes Putin will deny responsibility, and then they would move on to other topics.

In another Monday morning tweet, President Trump sought to pin blame for the matter on President Obama.

“President Obama thought that Crooked Hillary was going to win the election, so when he was informed by the FBI about Russian Meddling, he said it couldn’t happen, was no big deal, & did NOTHING about it. When I won it became a big deal and the Rigged Witch Hunt headed by Strzok!” Trump wrote, referencing first 2016 Democratic presidential nominee Hillary Clinton and then FBI agent Peter Strzok, who testified before Congress in a combative hearing last week.

Trump arrived with First Lady Melania Trump in Helsinki late Sunday, after spending the weekend golfing at his property in Scotland. Aboard Air Force One, the president aired some of his grievances on Twitter ahead of his upcoming summit with Putin.

“Unfortunately, no matter how well I do at the Summit, if I was given the great city of Moscow as retribution for all of the sins and evils committed by Russia over the years, I would return to criticism that it wasn’t good enough — that I should have gotten Saint Petersburg in addition!” Trump wrote.

And after a week of denigrating the U.S. news media on foreign soil, Trump continued in his tweetstorm: “Much of our news media is indeed the enemy of the people and all the Dems know how to do is resist and obstruct! This is why there is such hatred and dissension in our country — but at some point, it will heal!”

Trump began his day Monday in this Nordic capital by meeting Finnish President Sauli Niinisto for breakfast, along with their wives. When a reporter asked about his message for Putin, Trump replied, “We’ll do just fine.”

President Trump also touted the unity of NATO, saying the treaty alliance of 29 nations that is a Western bulwark against an expansionist Russia has “never been stronger than it is today.”

Last week in Brussels, Trump upended the NATO summit with demands that European allies increase their defense spending commitments. On Monday in Helsinki, Trump claimed credit for forcing the hands of his counterparts. “It was a little bit tough at the beginning,” he said, “but it turned out to be love.”

Putin was set to land in Helsinki around noon local time with fresh momentum after presiding over the World Cup final in Moscow, a tournament that many observers — including Trump — hailed as a success.

Russian officials have kept expectations low, emphasizing that the very fact of the meeting is an important step forward after years of tensions between Moscow and Washington. Ahead of the summit, Putin spokesman Dmitry Peskov praised Trump’s pragmatism in an interview with pro-Kremlin broadcaster RT.

“Our president is very pragmatic, very open and consistent,” Peskov said, referring to Putin, according to the Interfax news agency. “He always says that the interests of Russia and the people of Russia are the main thing to him. And therefore he respects the fact that Donald Trump has the same attitude to his country.”

For Putin, the setting of the summit provides something of a home-turf advantage. Although Finland is a member of the European Union and is a neutral nation, it borders Russia and is familiar to Putin, as Helsinki is just up the Bay of Finland from his hometown of St. Petersburg.

This vibrant Nordic capital, which in the summertime glistens with sunlight late into the evening, holds significant resonance for U.S.-Russia affairs as a neutral site for leaders of the two countries to meet.

In 1990, then-President George H.W. Bush met in Helsinki with then-Soviet leader Mikhail Gorbachev to show a unified front against then-Iraqi President Saddam Hussein amid escalating tensions in the Persian Gulf. And in 1997, then-President Bill Clinton and then-Russian President Boris Yeltsin held a two-day summit in this city to discuss arms control and the addition of former Soviet countries to NATO.

President Trump has said he has low expectations for Monday’s summit with President Putin and heads into it without the kind of pre-scripted outcomes typical at such international meetings. Rather, he sees the meeting as a chance to build a better rapport with Putin and foster warmer relations between the United States and Russia.

“Right now, there’s no trust in the relationship, and because of that, problem-solving is practically impossible,” U.S. Ambassador to Russia Jon Huntsman said Sunday on NBC’s “Meet the Press.” “So this is an attempt to see if we can defuse and take some of the drama, and quite frankly some of the danger, out of the relationship right now.”

Trump and his advisers have sought to temper expectations for the summit, which is expected to include discussions over the ongoing conflicts in Syria and Ukraine, a Reagan-era arms-control agreement and the prospect of extending a 2011 nuclear arms reduction treaty with Russia.

The president declined to outline his objectives in an interview with CBS News in advance of the summit, and his advisers have said the mere act of holding the direct meeting with Putin is a “deliverable.”

Back in Washington, lawmakers from both parties have implored Trump to aggressively confront Putin.

“President Trump should have only one message for Putin [on Monday]: Quit messing with America,” Sen. Ben Sasse (R-Neb.) said on Twitter early Monday, arguing that Trump should not be “dignifying” the Russian president by granting a meeting.

Hillary Clinton tweeted, “Question for President Trump as he meets Putin: Do you know which team you play for?”

“It seems to us the opponents of the improvement of U.S.-Russia relations should not be allowed to endlessly exploit this harmful topic, which is being kept afloat artificially,” Putin’s foreign policy adviser Yuri Ushakov said ahead of the summit, according to Interfax.