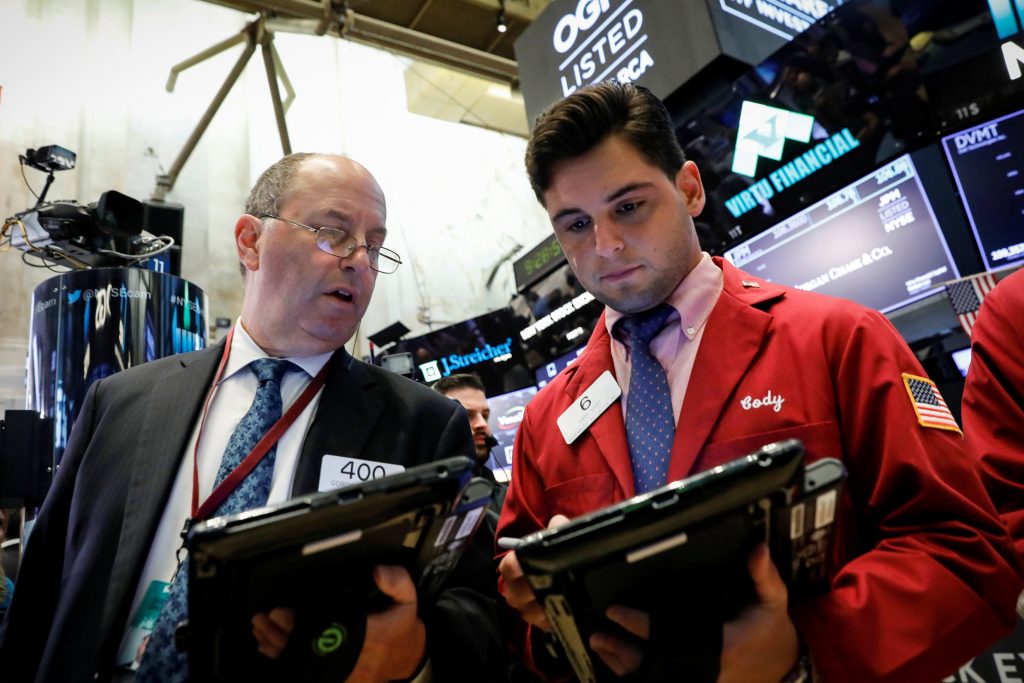 U.S. stocks are slipping Monday as energy companies sink along with the price of oil. Banks are rising along with interest rates, and Bank of America is climbing after a solid second-quarter report. Stocks finished at five-month highs last week as investors remained optimistic about the U.S. economy even as they worried about the trade war between the U.S. and China.

The Russell 2000 index of smaller-company stocks declined 10 points, or 0.6 percent, to 1,676, and two-thirds of the stocks on the New York Stock Exchange were trading lower.

BANK ON IT: Bank of America’s second-quarter profits jumped 33 percent. Like other big banks, it got a big boost from the corporate tax cut that passed at the end of 2017 and from higher interest rates. Bank of America has also been cutting expenses. Its profit and revenue were both better than analysts expected and the stock rose 3.7 percent to $29.62.

Troubled German lender Deutsche Bank jumped 8.4 percent to $12.18 after it said its earnings will be considerably higher than expected. Deutsche Bank has taken three years of losses based on high costs and big fines and penalties linked to past misconduct. It replaced its CEO in April.

Banks were also helped by an increase in interest rates after the Commerce Department said sales at retailers and restaurants kept rising in June. That’s a sign shoppers are still willing to spend even though wages are only growing slightly, and it’s a hint the Federal Reserve will likely continue to raise interest rates.

SINK-CLAIR: Tribune Media and Sinclair Broadcast Group both slumped after the Federal Communications Commission said it has concerns about Sinclair’s plan to buy Tribune. Right-leaning operator Sinclair has proposed selling some of its own stations as part of the $3.9 billion deal, but FCC Chairman Ajit Pai said Sinclair would continue to control them in practice, which would violate the law.

Tribune Media plunged 13.8 percent to $33.25 and Sinclair skidded 6.5 percent to $30.80. Sinclair is already the largest operator of local TV stations in the U.S.

ALUMINUM SHINING: Arconic, a company that makes aluminum parts for companies in the aerospace and automobile industries, soared after the Wall Street Journal reported that private equity firms are interested in buying it. The stock climbed 10.5 percent to $19.20, which gave Arconic a market value of about $9.3 billion.

When Arconic split from former parent Alcoa in late 2016, investors saw it as a faster-growing business whose stock would probably climb faster than Alcoa’s. That hasn’t happened, as Alcoa’s stock has slowly risen after years of struggles, but Arconic has fallen more than 40 percent since mid-January.

AMAZON, AGAIN: Online retail giant Amazon, already trading at record highs, rose 1.2 percent to $1,833.99 at the start of its Prime Day promotion. The company said the deals will last for 36 hours this year, and Amazon is trying to get more shoppers to Whole Foods, the grocery chain it bought last year. Amazon is up 57 percent in 2018 and is responsible for about 19 percent of the total return of the S&P 500 over that time, according to S&P Dow Jones Indices.

DATA DUMPED: Alliance Data Systems, which manages loyalty and rewards programs for retailers, fell 9.6 percent to $220.20 after it said late and delinquent payments increased in the second quarter.

CHINA GROWTH: The Chinese government said economic growth slowed a bit over the last three months. That wasn’t a surprise, and the quarter ended before the U.S. and China formally placed tariffs on billions of dollars in imports. But it adds to challenges for the world’s second-largest economy as the trade conflict heats up.

China also said it filed a World Trade Organization challenge to the tariff hike President Donald Trump has proposed on $200 billion in Chinese goods. Meanwhile the Trump administration brought cases against China, the E.U., Canada, Mexico and Turkey for retaliating against its taxes on imported steel and aluminum.