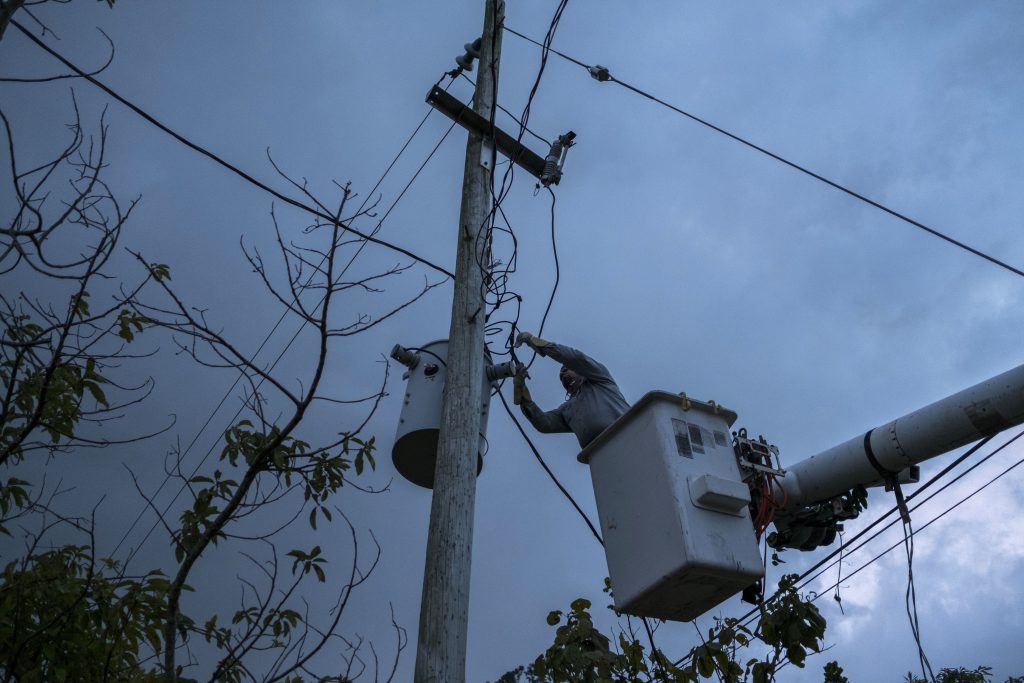 It was finally a night to celebrate in this village tucked into the mountains of central Puerto Rico.

People clicked on fans and plugged in refrigerators as electricity again flowed into homes that had been without power since two major hurricanes devastated the U.S. territory nearly a year ago.

Lights are slowly coming on for the more than 950 homes and businesses across Puerto Rico that remain without power in hard-to-reach areas. Repair crews are sometimes forced to dig holes by hand and scale down steep mountainsides to reach damaged light posts. Electrical poles have to be ferried in one-by-one via helicopter.

It is slow work, and it has stretched nearly two months past the date when officials had promised that everyone in Puerto Rico would be energized.

And even as people like 20-year-old delivery man Steven Vilella once again savor favorite foods like Rocky Road ice cream, many fear their newly returned normality could be short-lived. Turmoil at the island’s power company and recent winds and rains that knocked out electricity to tens of thousands of people at the start of the new hurricane season have them worried.

“If another storm comes through, we’re going to die. There’s no money left here,” said 66-year-old Marta Bermudez, who still has a blue tarp over her rusting zinc roof. She doesn’t believe the government has enough resources to properly rebuild the power grid amid an 11-year-old recession.

Still, after power was restored to her house on Friday, she celebrated no longer having to eat a diet of mostly rice, bananas and soup or wash clothes by hand in a sink that she and her husband found on the street after Hurricane Irma.

The only power they had for 10 months was courtesy of a neighbor who threw over a thin yellow extension cord connected to his generator that provided just enough power to light one bulb in her kitchen and another in her living room for a couple hours each day.

Puerto Rico’s electrical grid is still shaky after Hurricane Irma brushed past the island as a Category 5 storm last Sept. 6 and then Hurricane Maria made a direct hit as a Category 4 storm two weeks later, damaging up to 75 percent of transmission lines.

More than 52,000 power poles have been installed and thousands of miles of cable secured, with some 180 generators still providing power at key locations. But Gov. Ricardo Rossello warns that there is no backup system yet in case the power goes out again, which it did for up to 47,000 customers when the remnants of what was once Tropical Storm Beryl lashed Puerto Rico with rain and wind in early July.

A further complication is the lack of leadership at Puerto Rico’s Electric Power Authority, which has seen four directors since Maria, the most recent one lasting only a day in the job.

The turnover comes as federal and local officials try to strengthen the power grid in the middle of a new hurricane season and as Puerto Rico’s government prepares to privatize the generation of electricity and award concessions for transmission and distribution.

The changes at the power company, which include the resignation of five board members Thursday after the governor criticized a $750,000 salary for the newest CEO, are not a surprise to Juan Rosario, the board’s former consumer representative.

“The best thing to do when a boat is sinking is to jump into the water,” he said.

Still, despite the instability at the power company and their worries over the power grid’s ability to survive this year’s hurricane season, Puerto Ricans in the remote areas that recently had electricity restored are happy they can go back to their previous lives and no longer have to drain savings to fuel generators.

For the first time in 10 months, retiree Ramon Serrano was at peace knowing the insulin he depends on was safe in a cold refrigerator. He went to bed at midnight.

“It’s the latest we’ve been up,” said the 77-year-old Serrano, who lives in Adjuntas.

The wait for electricity was too much for some in the village.

Mayra Natal, a 47-year-old housewife, said she left Puerto Rico in February to live with relatives in New Jersey for four months because she couldn’t take being without electricity anymore. She returned in May thinking power would be restored soon, only to spend two more months without it despite promises from power restoration crews.

“They kept saying, ‘Next week, next week.’ And that’s what it’s been like until now,” she said.

Some Puerto Ricans are still waiting to celebrate.

He hasn’t had power since Hurricane Irma and burned through more than 200 candles until a group of volunteers gave him solar lamps this past Tuesday after navigating their way up a steep road filled with deep holes.

They also gave him a solar-powered inverter and a small refrigerator it runs. He and his two sons have filled the refrigerator with four bottles of water, a six-pack of soda and a package of meat stuffed into the tiny freezer.

Every day, Ortiz looks at the lone light post in front of his house and the downed cable that lies curled nearby.

Asked what is the first thing he will do after getting power back, he gestured toward an old boom box sitting on his porch.

“I’m going to turn that on and dance a little from happiness,” he said.