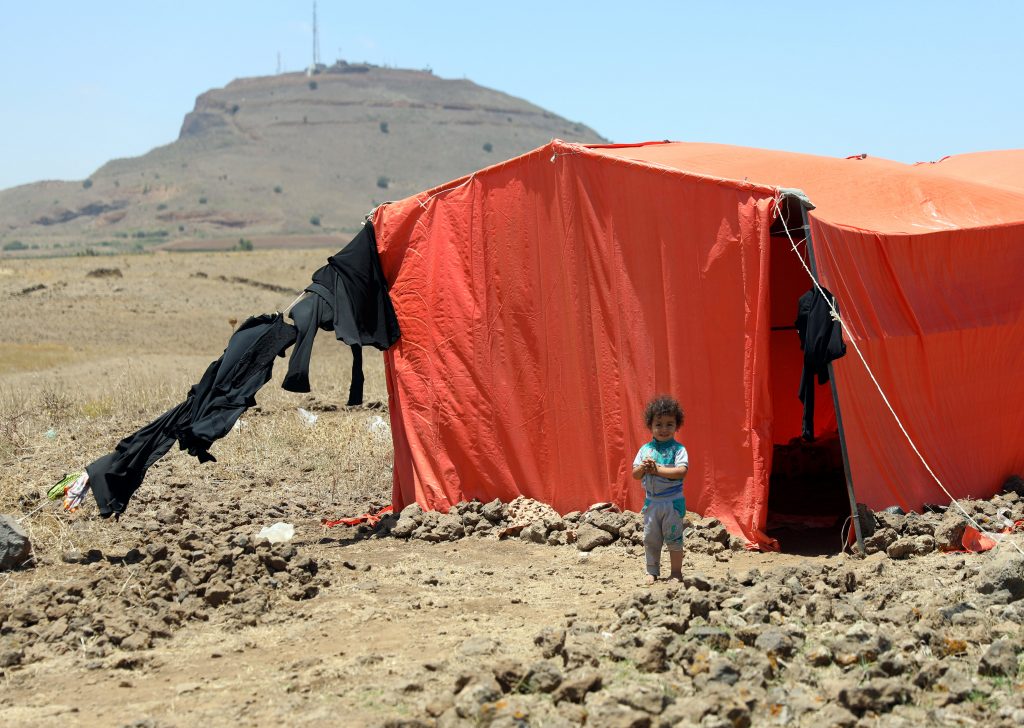 Syrian government forces unleashed hundreds of missiles on a rebel-held area near the Israeli side of the Golan Heights on Sunday, activists said, the latest phase in an offensive to end the insurgents’ presence in southern Syria.

The government’s push came after it had secured control of most of Daraa province in an offensive that began in June. On Sunday, the first batch of armed fighters and their families were preparing to leave from the city of Daraa, the provincial capital, in buses that would take them to the rebel-held Idlib province in the north.

Similar deals in other parts of Syria resulted in the evacuation of thousands of opposition fighters and civilians — evacuations that the United Nations and rights groups have decried as forced.

Syrian President Bashar Assad said Sunday the success in pushing the opposition out in Daraa embodies the will of his army and allied forces to “liberate all of Syrian territories” of “terrorism.”

In recent months and backed by Russian air force, the Syrian government has restored control of over 60 percent of the territory previously controlled by rebels.

Assad spoke during a meeting with visiting Iranian foreign ministry’s official Hossein Jaberi Ansari. Assad’s office said the two agreed that the “elimination of terrorism in most of the Syrian territory has laid the most appropriate ground to reach results at the political level” that could put an end to the war in Syria.

Syria’s government refers to all armed opposition groups as “terrorists” and accuses the West, Turkey, Israel and regional countries of supporting them.

The statement came a day before President Donald Trump and Russia’s Vladimir Putin are to meet in Finland. Syria is expected to feature highly on the agenda. Russia is a major Assad ally.

In Daraa, the evacuation deal will hand over areas that have been held by the rebels for years back to government control. Daraa, which lies on a highway linking Damascus with Jordan, is the cradle of the 2011 uprising against Syrian President Bashar Assad.

Since early Sunday, government forces turned their missiles toward a stretch of land controlled by the armed opposition in northern Daraa and the countryside of adjacent Quneitra.

The Britain-based Syrian Observatory for Human Rights said government forces fired more than 800 missiles at an area between northern Daraa and Quneitra countryside, about 2.5 miles from the frontier with the Golan Heights. The Observatory said government forces advanced on Massharah, a village in Quneitra countryside while the rebels fought back in intense clashes that killed several pro-government fighters. The pro-Syrian government Central Military Media said a number of insurgents were killed in the clashes.

The Observatory reported airstrikes in Massharah, the first in over a year to hit Quneitra countryside. It also reported airstrikes in a nearby village in northern Daraa, where the government has been seeking to recapture a key hill in the area after failing to reach a deal with the rebels there. Capturing the hill would enable Syrian forces to move against militants linked to the Islamic State group.

Daraa activist Abou Mahmoud Hourani said an estimated 400 members of the armed opposition and their families will be evacuated out of Daraa. The Syria state media channel al-Ikhbariya said the evacuation of nearly 1,000 persons is likely to be completed on Sunday.