World ANALYSIS: What Trump and Putin Hope to Achieve at Helsinki Summit
World 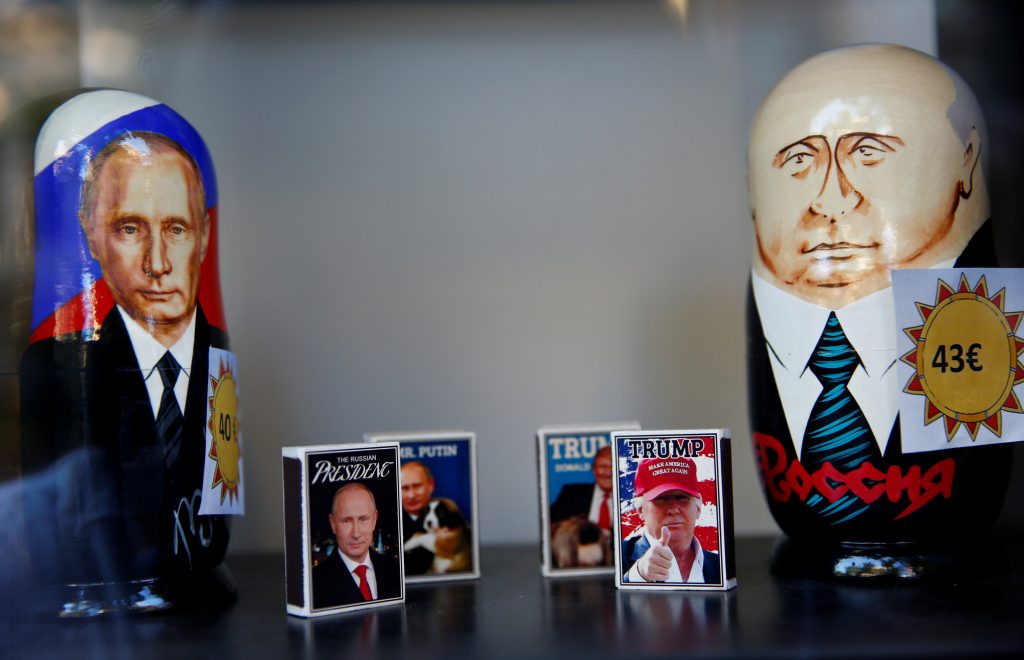 The outcome of the first summit between the unpredictable first-term American president and Russia’s steely-eyed longtime leader is anybody’s guess. With no set agenda, the summit could veer between spectacle and substance. As Donald Trump and Vladimir Putin head into Monday’s meeting in Helsinki, here’s a look at what each president may be hoping to achieve:

What Trump wants from Russia has long been one of the great mysteries of his presidency.

The president will go into the summit followed by whispers about his ties to Moscow, questions that have grown only more urgent since the Justice Department last week indicted 12 Russian military intelligence officers accused of interfering in the 2016 election in an effort to help Trump.

And while most summits featuring an American president are carefully scripted affairs designed to produce a tangible result, Trump will go face-to-face with Putin having done scant preparation, possessing no clear agenda and saddled with a track record that, despite his protests, suggests he may not sharply challenge his Russian counterpart over election meddling.

“I think we go into that meeting not looking for so much,” Trump told reporters last week.

Trump has strenuously insisted that improved relations with Russia would benefit the United States. But much of the appeal of the Finland meeting is simply to have the summit itself and to bolster ties between Washington and Moscow and between Putin and Trump, who places his personal rapport with foreign leaders near the heart of his foreign policy.

“The fact that we’re having a summit at this level, at this time in history, is a deliverable in itself,” said Jon Huntsman, the U.S. ambassador to Russia. “What is important here is that we start a discussion.”

Trump has been drawn to the spectacle of the summit and has expressed an eagerness to recreate in Helsinki the media show of last month’s Singapore summit when he met with North Korean leader Kim Jong Un.

Even as many NATO leaders made supportive noises this week, the Helsinki summit has raised fears in many global capitals that Trump will pull back from traditional Western alliances, allowing Putin to expand his sphere of influence.

Back home, too, there is wariness on Capitol Hill, with a number of Democrats and a handful of Republicans urging Trump to cancel the summit in the wake of the explosive indictments.

But Trump has vowed that he can handle Putin, whom he has taken to referring to as a “competitor” rather than an adversary.

And Trump in recent days has outlined some of the items he’d like to discuss, including Ukraine. Though the president has said he was “not happy” about Russia’s annexation of Crimea from Ukraine, he puts the blame on his predecessor and says he will continue relations with Putin even if Moscow refuses to return the peninsula.

Trump also said he and Putin would discuss the ongoing war in Syria and arms control, negotiations that White House officials have signaled could be fruitful.

“I will be talking about nuclear proliferation,” the president said alongside British Prime Minister Theresa May on Friday. “We’ve been modernizing and fixing and buying. And it’s just a devastating technology. And they, likewise, are doing a lot. And it’s a very, very bad policy.”

But it is the matter of election meddling, including fears Russia could try to interfere in the midterm elections this fall, that could play a central role in the summit talks or loom even larger if not addressed. In neither of Trump’s previous meetings with Putin — informal talks on the sidelines of summits last year in Germany and Vietnam — did the president publicly upbraid the Russian leader, prompting questions about whether he believed the former KGB officer’s denials over his own intelligence agencies’ assessments of meddling.

Trump repeatedly has cast doubt on the conclusion that Russia was behind the hacking of his Democratic rivals and disparaged special counsel Robert Mueller’s investigation into possible links between Russia and his campaign as a “witch hunt.” But he said in Britain that he would raise it with Putin even as he downplayed its impact.

“I don’t think you’ll have any ‘Gee, I did it. I did it. You got me,'” Trump said. “You never know what happens, right? But I will absolutely firmly ask the question.”

For Putin, sitting down with Trump offers a long-awaited chance to begin repairing relations with Washington after years of spiraling tensions.

Putin wants the U.S. and its allies to lift sanctions, pull back NATO forces deployed near Russia’s borders and restore business as usual with Moscow. In the longer run, he hopes to persuade the U.S. to acknowledge Moscow’s influence over its former Soviet neighbors and, more broadly, recognize Russia as a global player whose interests must be taken into account.

These are long-term goals, and Putin realizes that no significant progress will come from just one meeting. More than anything else, he sees Monday’s summit as an opportunity to develop good rapport with Trump and set the stage for regular high-level contacts.

“Russia-U.S. ties aren’t just at their lowest point since the end of the Cold War, they never were as bad as they are now,” said Fyodor Lukyanov, who chairs the Council for Foreign and Defense Policies, an influential Moscow-based association of policy experts. “It’s unhealthy and abnormal when the leaders of the two nuclear powers capable of destroying each other and the rest of the world don’t meet.”

Moscow views Trump’s criticism of NATO allies and his recent comments about wanting Russia back in the Group of Seven club of leading industrialized nations with guarded optimism but no euphoria. Initially excited about Trump’s election, the Kremlin has long realized that his hands are bound by the ongoing investigations into whether his campaign colluded with Moscow.

Konstantin Kosachev, the Kremlin-connected head of the foreign affairs committee in parliament’s upper house, wrote in his blog that Russia won’t engage in vague talk about “illusory subjects,” such as the prospect of lifting Western sanctions or Russia’s return to the G-7.

Putin knows it would be unrealistic to expect U.S. recognition of Russia’s annexation of Crimea or a quick rollback of sanctions approved by Congress. Instead, he’s likely to focus on issues where compromise is possible to help melt the ice.

Syria is one area where Moscow and Washington could potentially reach common ground.

One possible agreement could see Washington give a tacit go-ahead for a Syrian army deployment along the border with Israel in exchange for the withdrawal of Iranian forces and their Hezbollah proxies, whose presence in the area represents a red line for Israel.

There is little hope for any quick progress on other major issues.

Kosachev said it would be “pointless” to discuss Russian meddling in the U.S. election, which Moscow firmly denies. He also warned that demands for Russia to return Crimea to Ukraine or revise its policy on eastern Ukraine would be equally fruitless. The Kremlin sees Crimea’s status as non-negotiable and puts the blame squarely on the Ukrainian government for the lack of progress on a 2015 plan to resolve the conflict in eastern Ukraine.

Putin has held the door open for a possible deployment of U.N. peacekeepers to separate the warring sides, but firmly rejected Ukraine’s push for their presence along the border with Russia.

On arms control, one area where the U.S. and Russia might reach agreement is a possible extension of the New START treaty, set to expire in 2021, which caps the number of deployed nuclear warheads at 1,550 for each country.

The Intermediate-Range Nuclear Forces Treaty, signed in 1987 by President Ronald Reagan and Soviet leader Mikhail Gorbachev, is supposed to last indefinitely but has increasingly run into trouble. The U.S. has accused Russia of violating the terms of the treaty by developing a new cruise missile, which Moscow has denied.

Russia has pledged adherence to both treaties, but it has become less focused on arms control agreements than in the past, when it was struggling to maintain nuclear parity with the U.S.

After complaining about U.S. missile defense plans as a major threat to Russia, Putin in March unveiled an array of new weapons he said would render the U.S. missile shield useless, including a hypersonic intercontinental strike vehicle and a long-range nuclear-powered underwater drone armed with an atomic weapon.

“Russia was much weaker, and the weak always try to appeal to international law,” Lukyanov said. “But the atmosphere is different now, and Russia is much more self-confident.”