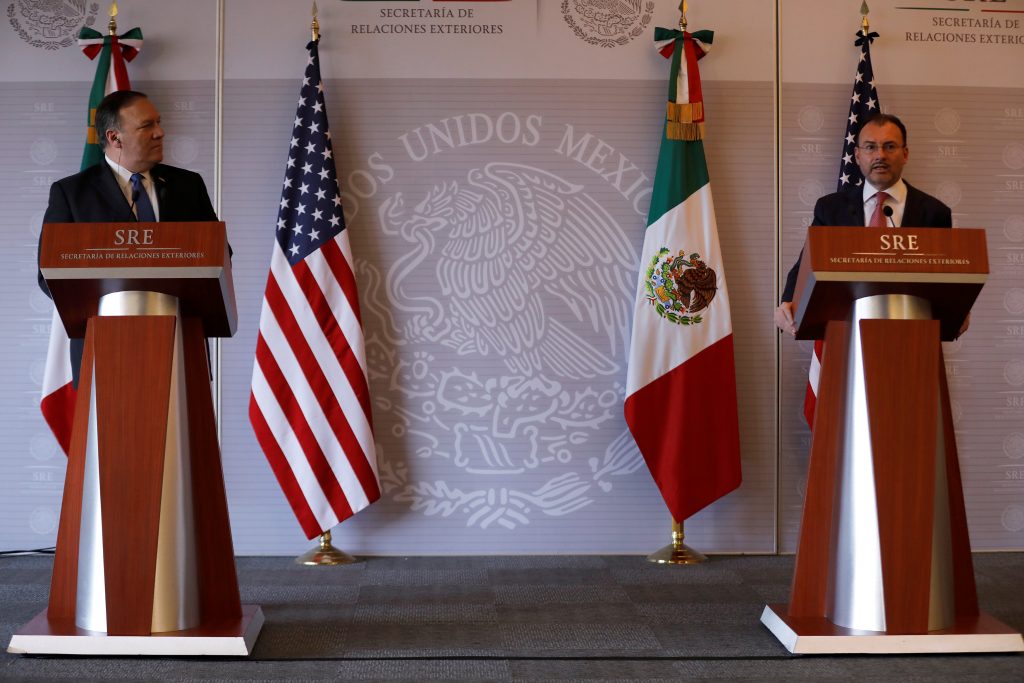 President Donald Trump wants to strengthen and improve ties with Mexico after “bumps in the road,” Secretary of State Mike Pompeo told Mexico’s next leader on Friday, following the leftist’s landslide victory this month.

President-elect Andres Manuel Lopez Obrador, in turn, handed Pompeo a letter addressed to Trump with his plans to reset the relationship, focusing on trade, immigration, development and security, said Marcelo Ebrard, an aide to the incoming president.

The visit by Pompeo and other top U.S. officials was, Pompeo said, intended to signal the “deep importance” Trump gives to what has been an increasingly strained bilateral relationship.

Trump has irked Mexico with demands that it pay for a border wall and his comments that it does nothing to slow illegal immigration. He has also pushed to revamp the North American Free Trade Agreement (NAFTA) to favor the United States.

“We know there have been bumps in the road between our two countries but President Trump is determined to make the relationship between our peoples better and stronger,” Pompeo said at the start of the 50-minute meeting with Lopez Obrador, who will take office on Dec. 1.

Since Trump’s election, Videgaray in particular has sought to avoid the collapse of the trillion-dollar NAFTA trade deal, cultivating close contact with the White House through Kushner and supporting closer diplomatic and security ties, U.S. and Mexican officials say.

Previous attempts by officials to pour oil on the waters of an increasingly turbulent bilateral relationship have been undone by intemperate tweets from the U.S. president himself.

Lopez Obrador has said that he wants good relations with the United States. Despite ideological differences with Trump, the two men share nationalist and populist leanings.

But the president-elect’s plans to shake up Mexico’s war on drug cartels, including by reducing security cooperation with the United States, could put him on a collision course with Trump.

Speaking to the media after the meeting with Lopez Obrador, Pompeo said he had “respectfully reinforced” the importance of border security.

“Americans must be able to see improvements that better protect our national sovereignty,” he said, adding that it was important to have “strong, fair and reciprocal” trade ties.

Ebrard said the border wall was not mentioned in the talks, adding that he was “reasonably optimistic” that ties could improve between the two neighbors in coming years.

Lopez Obrador’s plan includes pressing the United States to reduce the flow of migration northwards by helping to create better living standards in Mexico and Central America, his team has said.

Foreign Minister Videgaray said the outgoing and incoming governments would present a “common front” toward the United States.

After Pena Nieto met the delegation, he issued a statement calling for the quick reunification of immigrant children separated from their parents under Trump’s “zero tolerance” border policy.