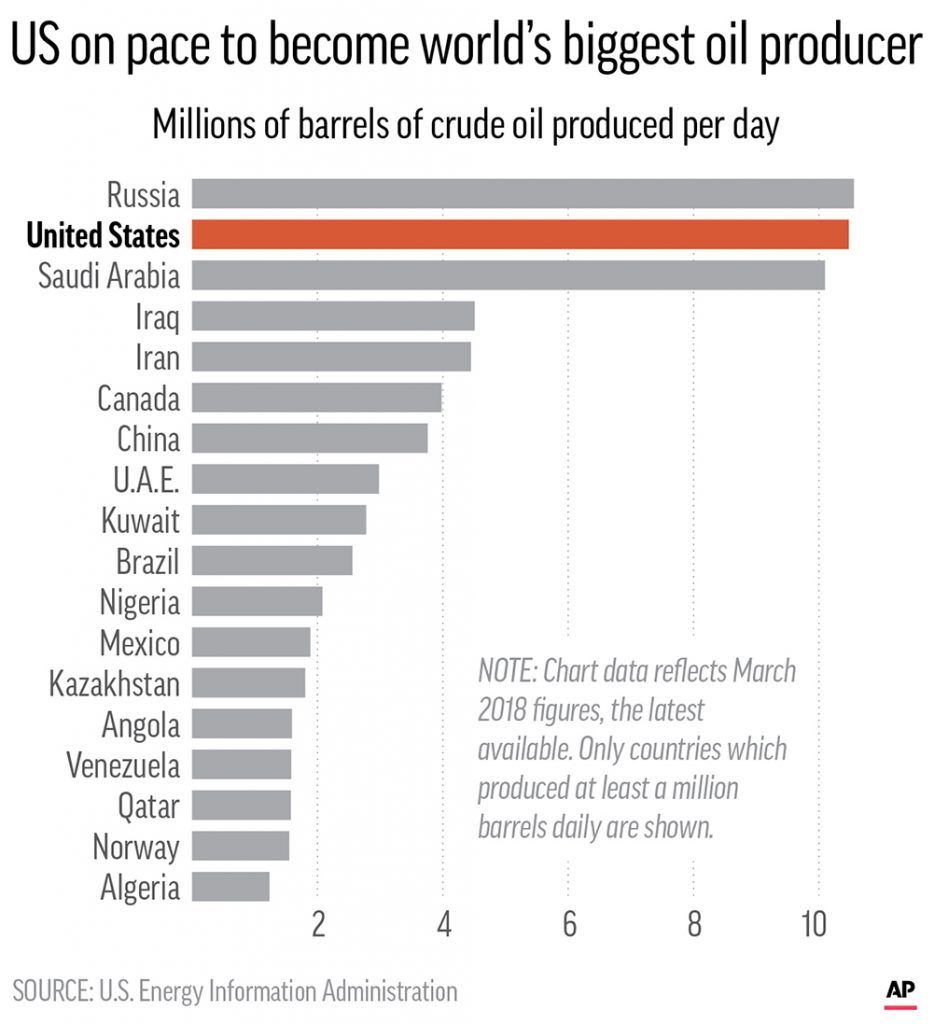 The U.S. has nosed ahead of Saudi Arabia and is on pace to surpass Russia to become the world’s biggest oil producer for the first time in more than four decades.

The latest forecast from the U.S. Energy Information Administration predicts that U.S. output will grow next year to 11.8 million barrels a day.

“If the forecast holds, that would make the U.S. the world’s leading producer of crude,” says Linda Capuano, who heads the agency, a part of the Energy Department.

Saudi Arabia and Russia could upend that forecast by boosting their own production. In the face of rising global oil prices, members of the OPEC cartel and a few non-members including Russia agreed last month to ease production caps that had contributed to the run-up in prices.

President Donald Trump has urged the Saudis to pump more oil to contain rising prices. He tweeted on June 30 that King Salman agreed to boost production “maybe up to 2,000,000 barrels.” The White House later clarified that the king said his country has a reserve of 2 million barrels a day that could be tapped “if and when necessary.”

The idea that the U.S. could ever again become the world’s top oil producer once seemed preposterous.

“A decade ago the only question was how fast would U.S. production go down,” said Daniel Yergin, author of several books about the oil industry including a history, “The Prize.” The rebound of U.S. output “has made a huge difference. If this had not happened, we would have had a severe shortage of world oil,” he said.

The United States led the world in oil production for much of the 20th century, but the Soviet Union surpassed America in 1974, and Saudi Arabia did in 1976, according to Energy Department figures.

But the last decade or so has seen a revolution in American energy production led by techniques including hydraulic fracturing, or fracking, and horizontal drilling.

According to the Energy Department, the U.S. edged ahead of Saudi Arabia in February and stayed there in March; both trailed Russia.

The trend of rising U.S. output prompted Fatih Birol, executive director of the International Energy Agency, to predict this spring that the U.S. would leapfrog Russia and become the world’s largest producer by next year — if not sooner.

One potential obstacle for U.S. drillers is a bottleneck of pipeline capacity to ship oil from the Permian Basin of Texas and New Mexico to ports and refineries.

“They are growing the production but they can’t get it out of the area fast enough because of pipeline constraints,” said Jim Rittersbusch, a consultant to oil traders.

Some analysts believe that Permian production could decline, or at least grow more slowly, in 2019 or 2020 as energy companies move from their best acreage to more marginal areas.