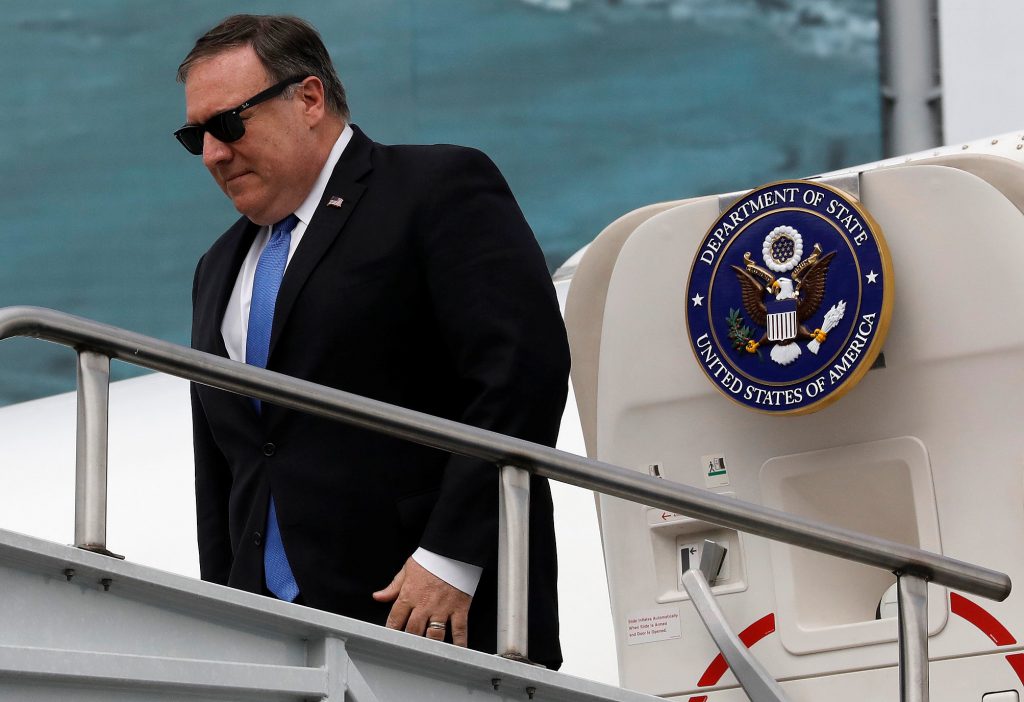 Secretary of State Mike Pompeo and a Cabinet-level delegation arrived in Mexico Friday to meet with both the sitting president and president-elect after a sea-change election there that could offer a chance for the neighbors to repair strained relations — or make them worse.

U.S.-Mexico ties have deteriorated significantly under President Donald Trump, who campaigned on building a border wall and who has repeatedly blamed Mexico for economic and social problems in the United States.

Pompeo’s delegation rolled through Mexico City’s streets in a motorcade of SUVs with diplomatic plates and tinted windows, flanked by police on motorcycles. They were meeting first with President Enrique Pena Nieto and then with leftist Andres Manuel Lopez Obrador, who won a landslide victory in elections and will take office in December. Earlier this month, Trump and Lopez Obrador both made positive statements following a telephone conversation; the wall was not mentioned.

Joining Pompeo on Friday is Trump’s son-in-law and White House adviser Jared Kushner, who has played a key role in maintaining relations with Mexico, in part because of his close ties to the foreign secretary of the current government, Luis Videgaray. Also in the delegation are Treasury Secretary Steven Mnuchin and Homeland Security Secretary Kirstjen Nielsen.

The State Department said the visit is intended to demonstrate the strength and importance of U.S.-Mexico relations and the Trump administration’s eagerness to work with the incoming government. The two sides will discuss ways to combat transnational criminal organizations, the opioid epidemic in the U.S., trade tensions and irregular migration.

Sharing a nearly 2,000-mile border, Mexico and the United States have traditionally coordinated closely on security and immigration. Mexico is also the United States’ third-largest trading partner for goods, with the U.S. buying about 80 percent of Mexico’s exports from automobiles to fruit, vegetables and beer.

One proposed plan is to declare Mexico a “safe third country,” meaning people traveling through Mexico hoping to claim asylum in the U.S. would have to do so in Mexico instead, according to a Mexican official who spoke on condition of anonymity because he was not authorized to brief the media. However, the official said, the proposal has very little support in Mexico as it would burden the country with tens of thousands more asylum seekers a year, something the country lacks the resources to tackle.

When asked about the plan earlier this week, Lopez Obrador did not respond directly, saying only that immigration shouldn’t involve “coercive measures.”

Mexico’s president-elect has said that development, the renegotiation of NAFTA and immigration will be the main topics of discussion Friday. Lopez Obrador, who campaigned heavily on increasing support for Mexico’s poor and fighting government corruption, has said that encouraging development in Mexico would help solve immigration problems.

Despite positive statements from both sides, the upcoming transition of power in Mexico also has the potential to destabilize U.S.-Mexico relations if either leader takes aim at the other to appeal to his political base at home. They’re unlikely partners as they occupy opposite ends of the political spectrum.

Lopez Obrador has already announced that his government will cancel a pending purchase of U.S. helicopters as an example of cost-cutting measures. The sale was initially promoted by the State Department as a move that would help a strategic partner fight criminal organizations.

And November midterm elections in the U.S. bring the possibility that Trump could return to the rhetoric of his presidential campaign that was derogatory toward Mexico.