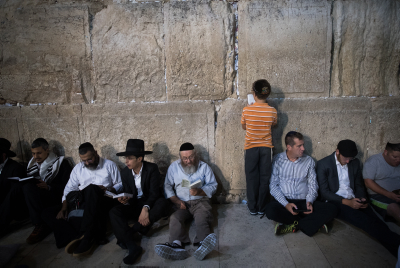 If you can open a business on Shabbos, why not on Tishah B’Av? That’s the unfortunate thinking of the Green Party, which recommends that restaurants and cafés do just that – and has prepared special signs that businesses can hang in their windows, proclaiming that they are “open on Tishah B’Av for the benefit of the public.”

Melachah is not prohibited on Tishah B’Av, but as it is a day of national mourning, many businesses remain closed, or on limited operations, throughout the day. In addition, local laws prohibit the operation of “places of enjoyment” – including theaters, restaurants, and the like – from opening on the night of Tishah B’Av. Violators can be fined up to NIS 2,600.

The Green Party is seeking a seat on the Tel Aviv City Council, and as far as it is concerned, the Tishah B’Av law is just another example of “religious coercion. Let the restaurants, cafés, grocery stores and everyone else open on Tishah B’Av. Enough of the threats, intimidation, fines, and tickets for those who operate their businesses on Tishah B’Av. The Tel Aviv Municipality cannot be a party to this coercion,” the group said in a social media post.

Besides the laws forbidding it, it is generally considered poor form to keep a business open on the night of Tishah B’Av, and the call to do so has generated a great deal of criticism – and not only among observant Israelis.

Commenting on the matter, Emily Mouati, a well-known media figure who is running for the City Council in municipal elections (set to take place in November) on the Zionist Camp list, says,  “[The Green Party] should halt this campaign. The Beis Hamikdash was lost to all Jews, not just religious ones. One can be secular without desecrating this most important day. We have enough problems, there is no need to manufacture another one to divide us.”

Kulanu MK Meirav Ben-Ari said that “as a liberal, I cannot understand why there is a need to open cafés on Tishah B’Av, and to distribute signs announcing that they are doing so. Why is it necessary to insult this day, which is important to many Israelis. They are just sowing dissent and hatred,” she added.

Education Minister Naftali Bennett likewise responded angrily. “I don’t want to talk specifically about this insulting incident, but I do want to say that I move about in schools, army bases, and everywhere else, and I meet thousands of Israelis of all backgrounds every week. And I can definitively say that this does not represent us as Israelis. We are better than this. The Jewish people love their traditions, and despite differences between them, know how to remain united,” he wrote in a social media post.