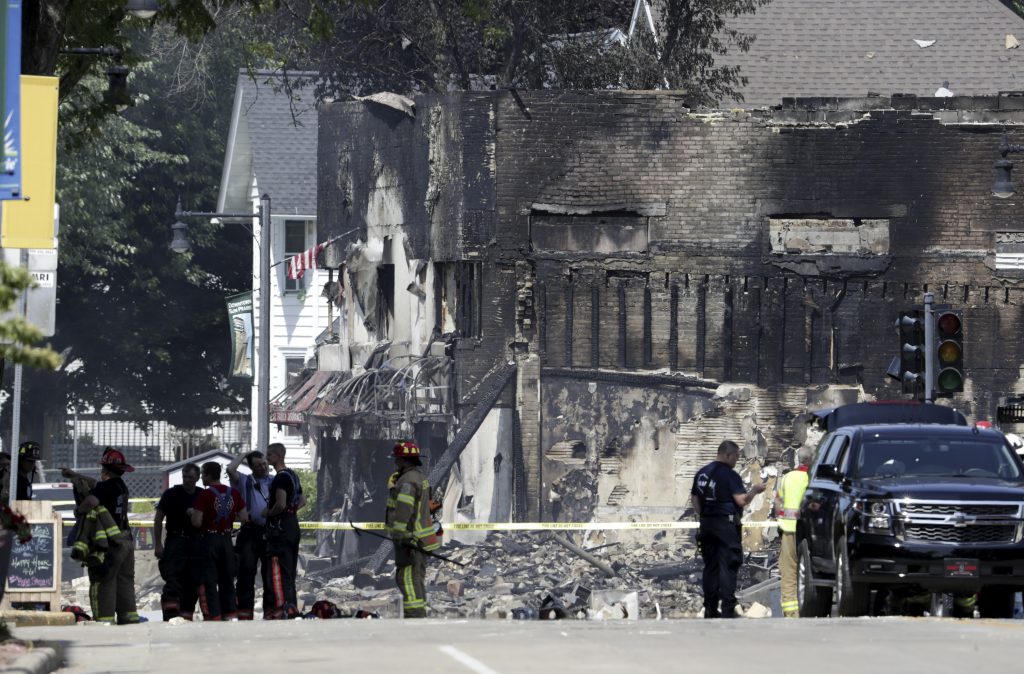 A firefighter was killed and at least a dozen other people were injured when a natural gas explosion leveled at least two buildings in a Wisconsin community, authorities said Wednesday.

Firefighters had arrived to investigate a gas leak in the Madison suburb of Sun Prairie when the explosion happened Tuesday evening. The blast destroyed several buildings and ignited a fire that belched a plume of ink-black smoke that could be seen for miles.

Mahlon Mitchell, president of the state firefighters union, identified the firefighter who died as Sun Prairie Fire Department Capt. Cory Barr, who also owned a tavern that caught fire in the blast. Barr had been with the department at least 10 years, Sun Prairie Fire Chief Christopher Garrison said. He also worked as a real estate agent.

“The Sun Prairie Fire Department is strong. We will keep on building from this. We are hurt, but we will come back,” Garrison said.

Five other firefighters, a police officer and at least six civilians were hurt, according to Sun Prairie police Lt. Kevin Konopacki. One of the firefighters was critically injured and remained hospitalized Wednesday, Konopacki said.

We Energies spokeswoman Amy Jahns said workers for a private contractor punctured a 4-inch gas main, causing a leak that resulted in the explosion that rained burning debris on downtown Sun Prairie and set vehicles parked nearby on fire. WE Energies did not provide the name of the contractor.

The Sun Prairie Police Department said people who were evacuated within a half-mile radius of the explosion were being allowed back in their homes once they have been cleared by a representative of We Energies. The Madison Fire Department’s Heavy Urban Rescue Team was also evaluating the structural integrity of the damaged downtown buildings.

The Barr House, which was owned by Barr and Glass Nickel Pizza, exploded after the gas ignited, police said. Authorities did not provide details on the civilians who were injured, including where they were in relation to the blast.

“It looked like flames shooting out of heaven and just debris going everywhere,” said Benjamin Berry, who lives in Sun Prairie, which is less than 15 miles from the state capital of Madison, and has about 32,800 residents.

Steve Owen, 60, who owns Sun City Cyclery and Skates in downtown Sun Prairie, said he saw firefighters and police officers on the street before the explosion happened. He said the building across from his shop “literally lifted up.”

He said the force of the blast knocked him back in his chair and that he ran outside and saw a ball of fire.

“People were scrambling,” said Owen, who lives above his shop.

Jill Thompson, 56, who lives about two blocks away, said she saw smoke immediately after the blast occurred.

“It shook the whole building,” Thompson said. “I thought someone had hit the building with their vehicle.”

Steve DePula, owner of Salvatore’s Tomato Pies restaurant about a half-block from the fire, said he had known Barr for several years. He said they both served on a downtown business committee. He described Barr as a champion of downtown issues who worked to both preserve Sun Prairie and transform it into a travel destination.

“He was very, very proud of Sun Prairie and the community he lived in,” DePula said. “It’s a testament that he served as a firefighter to how much he cared about the community.”