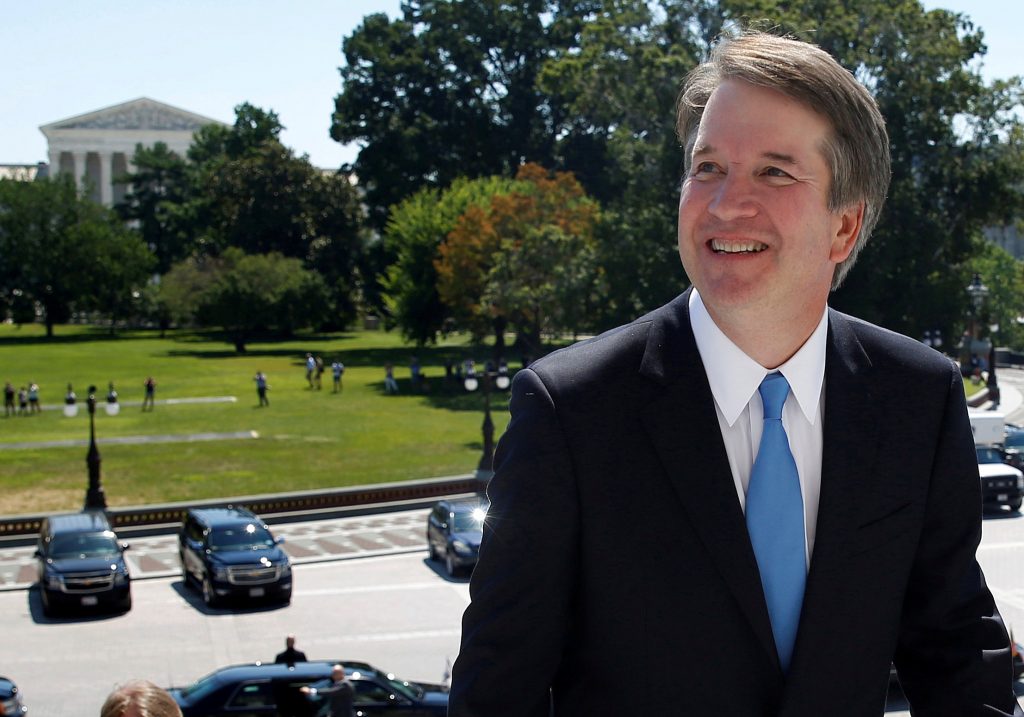 President Donald Trump’s Supreme Court nominee, Brett Kavanaugh, mapped out strategy with Republican leaders Tuesday, launching a fierce confirmation battle that could remake the court for decades and roil the midterm elections in the meantime.

Kavanaugh, a favorite of the GOP establishment, first huddled with Senate Majority Leader Mitch McConnell of Kentucky. Joining him were Vice President Mike Pence and former Sen. Jon Kyl. He also met for roughly 30 minutes with Sen. Chuck Grassley of Iowa, chairman of the Judiciary Committee that is taking the first close look at the nomination.

While Republicans have set a goal of confirming Kavanaugh this fall, Grassley said speed isn’t the goal. The vetting process, he said, is “going to be thorough and going to be done right.” He did not offer a timeline for confirmation hearings.

Republicans have reacted positively to Trump’s pick; but McConnell has little margin of error for the final vote, unless a few Democrats can be brought onboard. Republicans hold a slim 51-49 Senate majority, but they hope to gain support for Kavanaugh from a handful of Democrats who are up for re-election in states where Trump is popular.

McConnell called Kavanaugh “one of the most thoughtful jurists” in the country and blasted Democrats as “eager to try and turn judicial confirmations into something like political elections.” The GOP leader warned against engaging in “cheap political fear-mongering.”

“We’ll hear all kinds of fantastic stories about the pain and suffering that this perfectly qualified, widely respected judge will somehow unleash on America if we confirm him to the Court,” McConnell said.

Democrats are uniting behind a strategy to turn the confirmation fight into a referendum on social issues and Republicans’ attempts chip away at Obamacare. Senate Democratic leader Chuck Schumer of New York is vowing to fight the nomination “with everything I have.”

The Democrats have turned their attention to pressuring two socially liberal Republicans, Sens. Susan Collins of Maine and Lisa Murkowski of Alaska.

“We’ve got some due diligence that we’ve got to do,” Murkowski said Tuesday.

Collins said Kavanaugh is “clearly qualified,” but other issues also will come into play for her, specifically “judicial temperament” and “judicial philosophy.”

Kavanaugh in the past has made statements about respecting precedents that could help in winning over Murkowski and Collins.

Kavanaugh, 53, is a former law clerk for retiring Justice Anthony Kennedy, a moderate conservative. Like Trump’s first nominee last year, Justice Neil Gorsuch, Kavanaugh would be a young addition who could help remake the court for decades with rulings on hot-button issues.

In a prime-time announcement, Trump called Kavanaugh “one of the finest and sharpest legal minds of our time.”

With Kavanaugh, Trump is replacing a swing vote on the nine-member court with one believed to be a staunch conservative. Kavanaugh, who serves on the Court of Appeals for the D.C. Circuit, has taken an expansive view of executive power and has favored limits on investigating the president.

Speaking at the White House, Kavanaugh pledged to preserve the Constitution and said that “a judge must be independent and must interpret the law, not make the law.”

Some conservative and libertarian-leaning activists were disappointed by the pick and doubted it would provide Republicans with the midterm election boost they are looking for to motivate voters to the polls.

“This is going to give heartburn to some conservatives,” said Brian Darling, a former Republican counsel to Sen. Rand Paul, R-Ky.

“It’s not the pick conservatives had hoped for,” Darling said.

Paul, a libertarian, was among some Republican senators who had favored other options. But the senator tweeted after the announcement that he looked forward to meeting Kavanaugh “with an open mind.”

Like the other eight justices on the court, Kavanaugh has an Ivy League law degree, spending his undergraduate and law school years at Yale. Since 2006, he has been a judge on the federal appellate court in Washington. He also was a key aide to Kenneth Starr during Starr’s investigation of President Bill Clinton, worked on behalf of George W. Bush’s campaign during the election recount in 2000 and served in the Bush White House.

Kavanaugh’s many written opinions provide insight into his thinking, and will also be fodder for Senate Democrats who will seek to block his confirmation. He has written roughly 300 opinions as a judge, authored several law-journal articles, regularly taught law-school classes and spoken frequently in public.