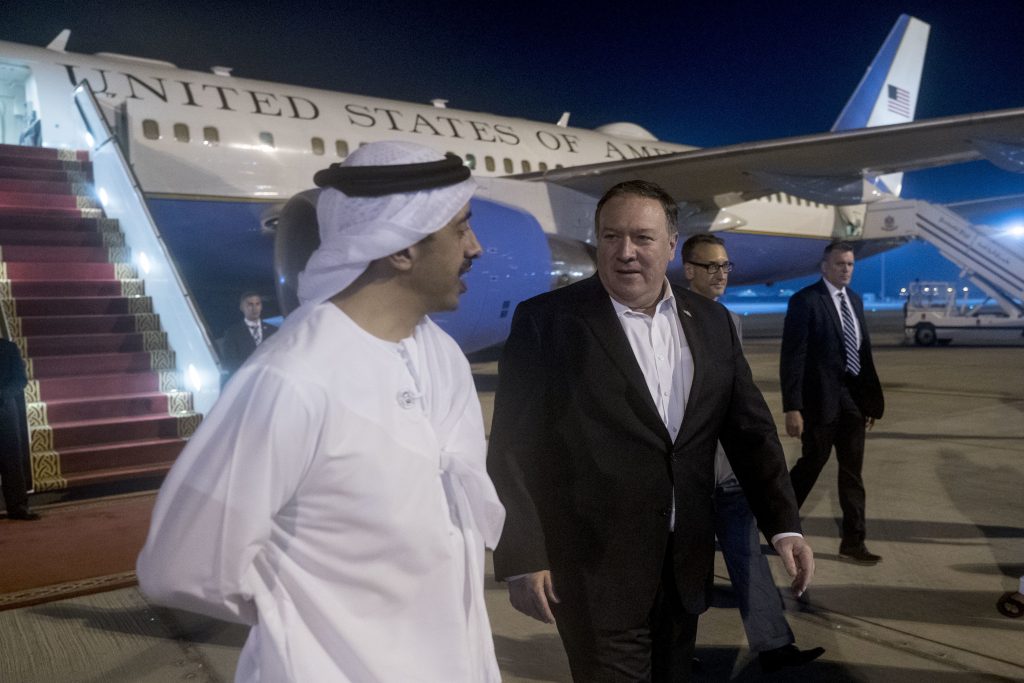 U.S. Secretary of State Mike Pompeo on Tuesday accused Iran of using its embassies to plot terrorist attacks in Europe and warned Tehran that its actions have “a real high cost” after it threatened to disrupt Mideast oil supplies.

Pompeo’s comments came during a short trip to the United Arab Emirates, a staunch U.S. ally, and as senior U.S. officials were wrapping up three days of talks in neighboring Saudi Arabia on countering threats from Iran and starving it of oil revenue.

“Just this past week there were Iranians arrested in Europe who were preparing to conduct a terror plot in Paris, France. We have seen this malign behavior in Europe,” Pompeo said in an interview with Sky News Arabia.

The U.S. team at the talks in Saudi Arabia, led by State Department policy planning director Brian Hook, made a point of focusing on the arrest earlier this month of an Iranian diplomat posted to Vienna who was allegedly involved in the plot to bomb an Iranian opposition group rally in France on June 30, according to a senior U.S. official.

The official was not authorized to discuss the meeting publicly and spoke on condition of anonymity. The envoy’s arrest in Germany came after a couple with Iranian roots was stopped in Belgium and authorities reported finding powerful explosives in their car.

Iran denies involvement and contends the allegations against its diplomat are intended to damage its relations with the European Union.

The U.S. official said the administration takes the arrest of the diplomat “very seriously” and sees it as evidence that Iran is using diplomatic compounds in Europe and elsewhere as cover to plot terrorist attacks. The official dismissed Iranian suggestions that it was a “false flag” operation intended to falsely accuse Iran of terrorism.

Pompeo intends to raise the need to scrutinize Iranian diplomats more closely when he meets with European counterparts in Brussels, where he was to accompany President Donald Trump at a NATO summit, said the official, who briefed reporters on Pompeo’s flight from Abu Dhabi.

In interviews, Pompeo stressed the desire of America and its Gulf Arab allies to turn the economic screws on Iran after President Trump’s withdrawal — in the face of European opposition — from the 2015 agreement that had restricted Tehran’s nuclear program in exchange for sanctions relief.

Pompeo said they seek to “deny Iran the financial capacity to continue this bad behavior”, using a broad range of sanctions. He said the sanctions are not aimed at the Iranian people, but at “convincing the Iranian regime that its malign behavior is unacceptable and has a real high cost for them.”

He mentioned recent threats by Iranian President Hassan Rouhani, who in Europe last week said any disruption to Iran’s oil exports would result in the whole region’s exports being disrupted. A third of all oil traded by sea passes through the Strait of Hormuz off Iran’s coast.

Iran “should know that America is committed to keeping sea lines open, keeping the transit of oil available for the entire world,” Pompeo told Sky News Arabia, a network half-owned by a member of Abu Dhabi’s ruling family. “That’s the commitment we have had for decades. We continue under that commitment.”

“The Americans are not ready for any new war in the Persian Gulf so the president’s remark was a good threat which will have positive impacts and will be a deterrent factor against cutting Iran’s oil exports,” Motahari said, according to a report on parliament’s website.

Global oil prices have risen on the expectation that the United States will push its allies to stop importing Iranian crude oil, further tightening world energy supplies. While allies like Saudi Arabia, the UAE and Kuwait say they are willing to increase their own production as necessary, additional output may not be enough to satiate demand.

Already, regular gasoline prices in the U.S. are $2.86 a gallon, up from $2.26 the year before, according to AAA. President Trump himself has been tweeting that oil suppliers must do more to lower prices ahead of midterm elections this fall.

While State Department officials earlier acknowledged that some allies will get waivers to continue importing Iranian oil, Pompeo seemed to strike a harder line Tuesday. He warned that such imports largely would be “sanctionable activity and we will enforce those sanctions.”

“We will consider (waivers,) but make no mistake about it: We are determined to convince the Iranian leadership that this malign behavior won’t be rewarded and that the economic situation in the country will not be permitted to be rectified until such time that they become a more normal nation,” he said.

Among the top importers of Iranian oil are China, India, Turkey and South Korea.