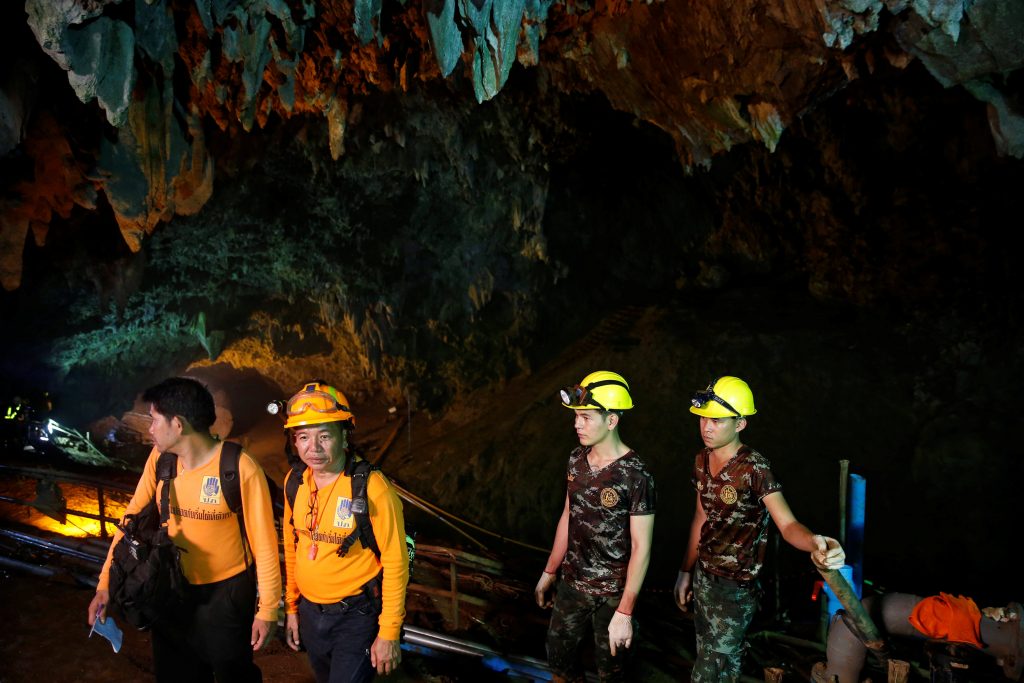 The first reports came in Tuesday, just as the sun began to set on the Tham Luang caves in northern Thailand: All 12 boys and their assistant soccer coach had been successfully rescued, after two weeks trapped in a flooded cave.

As news spread by word of mouth at the scene, dozens of volunteers and journalists camped out nearby threw their hands up and cheered. When the team of rescue divers emerged from the entrance of the cave in their wet suits, people yelled “Thank you!” in English and Thai, reaching out their hands to high-five them. In footage captured by the BBC, families of the boys were seen hugging in front of screens in their homes, as residents in the nearby city of Chiang Rai lined the streets, clapping and taking videos of the ambulances carrying the last few boys to Chiangrai Prachanukroh Hospital.

Miles away from the Thai city, thousands across the world joined them in celebration.

More than a week ago, the soccer team of 12 boys and their assistant coach were found trapped in a flooded chamber of a six-mile-long cave in northern Thailand. Momentary celebrations quickly gave way to rising anxiety as it became clear that the rescue would necessarily be highly risky. For days, divers strategized as teams of volunteers worked to drain water out of the cave. But faced with a forecast of more rain this week, experts warned that if a rescue mission were not executed quickly, the boys and their coach could be stranded in the cave for months more.

On Sunday, 14 days after the team first went missing, the divers took action, pulling the first group of four boys out of the cave. Each boy was escorted out by two divers through winding tunnels as narrow as 15 inches wide. People across the world held their breaths as the second group of boys was escorted out on Monday, leaving just four others and their coach trapped inside.

Former Chiang Rai provincial governor Narongsak Osatanakorn, who has been managing the rescue efforts, told a rowdy crowd in the city that the success of the mission was attributable to “the power of love.”

The Thai navy SEALs – along with the international team of divers who traveled to Mae Sai, the town nearest the cavern, to help – have quickly become immortalized as modern-day superheroes in various pieces of artwork.

Two Thai artists, who go by the name Sisidea, drew a particularly intricate cartoon to represent the various parties involved in the mission. In the piece, 12 small boars, to represent the 12 boys from the Wild Boars soccer team, bound through the water, safely escorted by frogs, representing the divers, and seals, referring to the navy SEALs. Above them, a bald eagle symbolizing the United States flaps its wings .

Other images circulating on social media include portraits and illustrations of Saman Kunan, the former Thai navy SEAL who died while trying to deliver oxygen to the boys last Friday. At the time, the Thai SEAL unit vowed to continue rescue efforts, writing on social media: “The determination and dedication of Saman will always be in all of our frogmen hearts. . . .We will complete this mission, just as Saman intended.”

One twitter user – @TrevDon – wrote: “Every now and then, we see a real hero. This is the last photo taken of Sgt. Saman Kunan before he lost his life on Thursday while returning from delivering oxygen to the boys trapped in the cave. He retired from the Thai Navy, but volunteered to help.”

Attention will now be focused on the recoveries of the boys and their coach; doctors who have been working with the eight boys rescued earlier last week have said they are generally in good health. The team also has plenty to look forward to. The English soccer team Manchester United has invited the Wild Boars to visit the Old Trafford stadium in Manchester for a match this coming season, and Kyle Walker, a player for England’s national team, tweeted that he was planning to send gifts to the 12 boys.