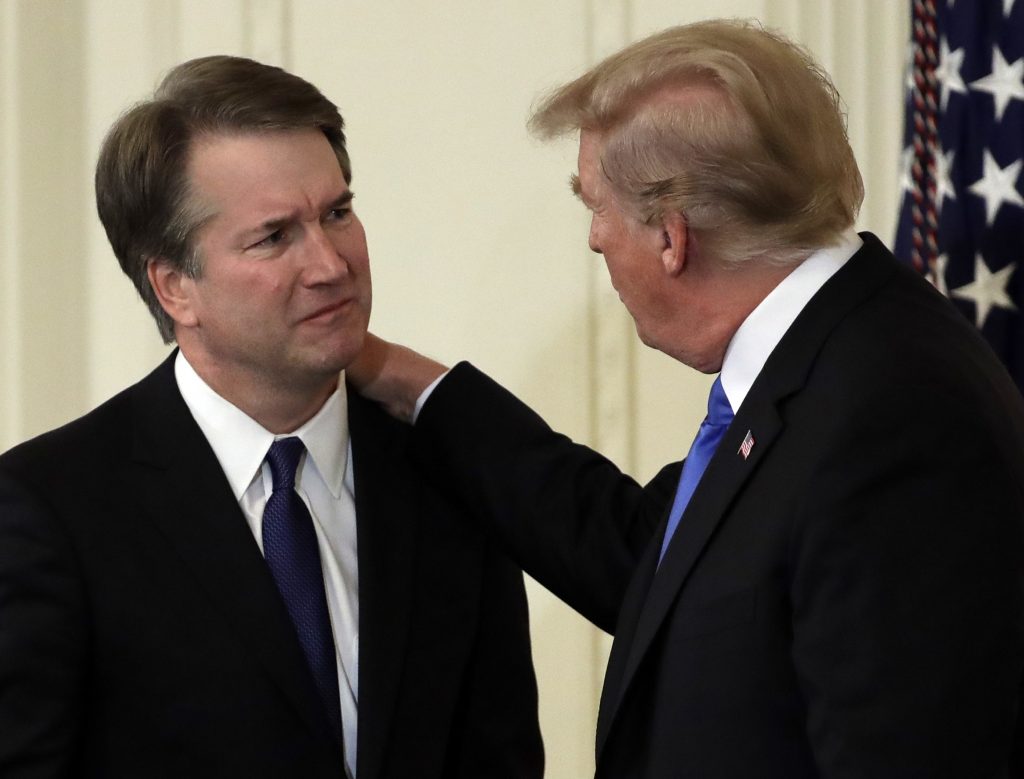 It’s pretty fair to say that a President Hillary Clinton would never have nominated the man who was named Monday night by the person who beat her in 2016 to the nation’s highest court.

That’s because Brett Kavanaugh was a senior attorney for the special counsel who worked on Clinton’s husband’s impeachment proceedings in the 1990s. He was also a top official in the George W. Bush White House, traveling frequently with the president and playing a key role in many of his decisions.

Which all makes for a dizzying rest of the summer. Democrats have no chance of stopping President Trump’s nominee from getting confirmed. But they are increasingly goaded by the party’s far left wing to “physically put their bod[ies] on the tracks,” as one socialist activist told Democratic Senate leader Charles Schumer during an event in Brooklyn last week.

Which means that the Senate’s Constitutional duty to “advise and consent” to a presidential nomination will turn into “obstruct and prolong” if they get their way. The best way Democrats, shut of real power, have to interrupt Kavanaugh’s coast to confirmation is by demanding every document the National Archive has on him.

That could be more than one million pages by the time it’s all done. Democrats could delay any vote until they have combed through all of them, searching for the spark that will ignite and burn down the haystack.

There’s the file during his time working for Kenneth Starr on Bill Clinton’s Whitewater and related scandals. There’s his work defending Bush during the 2000 election recount and subsequent three years in the White House. There’s his 12 years of handing down rulings on a high-profile appellate court.

Aside from all that, Kavanaugh delivered many addresses at judicial and conservative conferences, opined widely in the print media, and wrote papers on a range of subjects.

“People are going to claim they want every document that passed through the staff secretary’s office,” one GOP veteran of Supreme Court confirmation battles told Politico. “To me, that’s where the battle is going to be pitched.”

Democrats also cite a paper Kavanaugh wrote in 2009, suggesting that Congress pass a law postponing any civil or criminal charges against a sitting president until after his term is up. He wrote it chiefly based on his experience working for the Clinton special counsel but also said that he witnessed up front during his time in the Bush White House how these matters consume a president’s attention.

“Looking back to the late 1990s, for example,” he wrote, “the nation certainly would have been better off if President Clinton could have focused on Osama bin Laden without being distracted” by the impeachment proceedings.

Democrats such as Cory Booker of New Jersey say they will ask that, if confirmed, Kavanaugh recuse himself from any case that involves special counsel Robert Mueller and his Russia probe.

And that’s just the beginning. There are actually four streams the White House is following as it lays out the path to 51 votes in the Senate. All are manageable, but each one can blow up if left unattended.

The first group is, obviously, the majority of Republican senators. Most of them did not have Kavanaugh as their first choice but have already issued statements praising him. Unless some bombshell emerges, President Trump can count on roughly 48 votes from this group.

The second are the two moderate Republican senators — Susan Collins of Maine and Lisa Murkowski of Alaska — who are supporters of Roe v. Wade. With just two votes they have to spare, Trump could not afford to alienate those two. One more senator to watch is libertarian Rand Paul of Kentucky. He is a staunch constitutionalist who believes that the Bush administration, for which Kavanaugh worked, trampled on the founding document’s principles.

The third group are the ten Democrats who represent states that voted for Trump by large margins and are up for reelection this fall. The most vulnerable are Claire McCaskill of Missouri, Joe Manchin of West Virginia, Jon Tester of Montana, Joe Donnelly of Indiana, Bill Nelson of Florida and Heidi Heitkamp of North Dakota. Which will come first for them, party loyalty or their elections?

The conservative Judicial Crisis Network has pledged to spend $10 million on the coming battle. The first salvo begins this week, when the group will air a spot highlighting Kavanaugh’s biography in Alabama, North Dakota, Indiana and West Virginia — red states with Democratic senators.

The fourth group are the hardcore Democrats. Forty-four in number, they will vote against Kavanaugh with their eyes closed. “I will oppose him with everything I’ve got,” Schumer declared. But can their obstruction cause actual damage?

Complications from the first contingent abound, though. For one, Kavanaugh wasn’t the top choice of many — if not most — conservatives. He was criticized for once penning a ruling that laid out a way in which Roe v. Wade may be constitutional. He also was the first judge to suggest that the unpopular Obamacare mandate, the penalty for not having insurance, would be constitutional under Congress’s taxation authority. That differed from what Obama had said — that it was legal under the Commerce Clause, which allows Congress to regulate any business that operates in more than one state.

Kavanaugh’s reasoning was ultimately adopted by the Supreme Court, in a controversial 2014 ruling that divides the country to this day.

Kavanaugh is also disliked by some who view him as an establishment conservative in the Bush form at a time when President Trump has taken the GOP to a more populist arena.

In the end, however, he was chosen for four reasons.

Conservatives are still bitter over President George H. W. Bush’s nomination of David Souter to the Supreme Court in 1990. Souter came recommended by several conservative heavy hitters, despite his having only several months of experience on the bench. In the end, he turned out to be a liberal, churning out decisions that turned the stomachs of conservatives for two decades. His ultimate sock came in 2009, when he waited until after Bush left office to announce his retirement months into President Obama’s term.

Kavanaugh might not be the first choice of Trump’s base, but he is a known and acceptable quantity.

In the hours after Kavanaugh’s nomination, it emerged that Kennedy sought and received assurances from the president that one of his former clerks would get the position if he announced his retirement. To the Trump administration seeking to make its stamp on the judiciary for a generation, Kavanaugh quickly became the most acceptable one of his clerks.

The one who conservatives truly wanted was Amy Coney Barrett, an appellate court justice from Denver who made national headlines last year when a Democratic senator mocked her Catholic faith, saying, “The dogma lives loudly within you.” She is deeply religious, and as a young 46-year-old can issue conservative rulings for two generations.

But she did not clerk for Kennedy. “Next time,” a White House official promised.

If they get one. The last president to have three nominations serve on the court was Ronald Reagan.