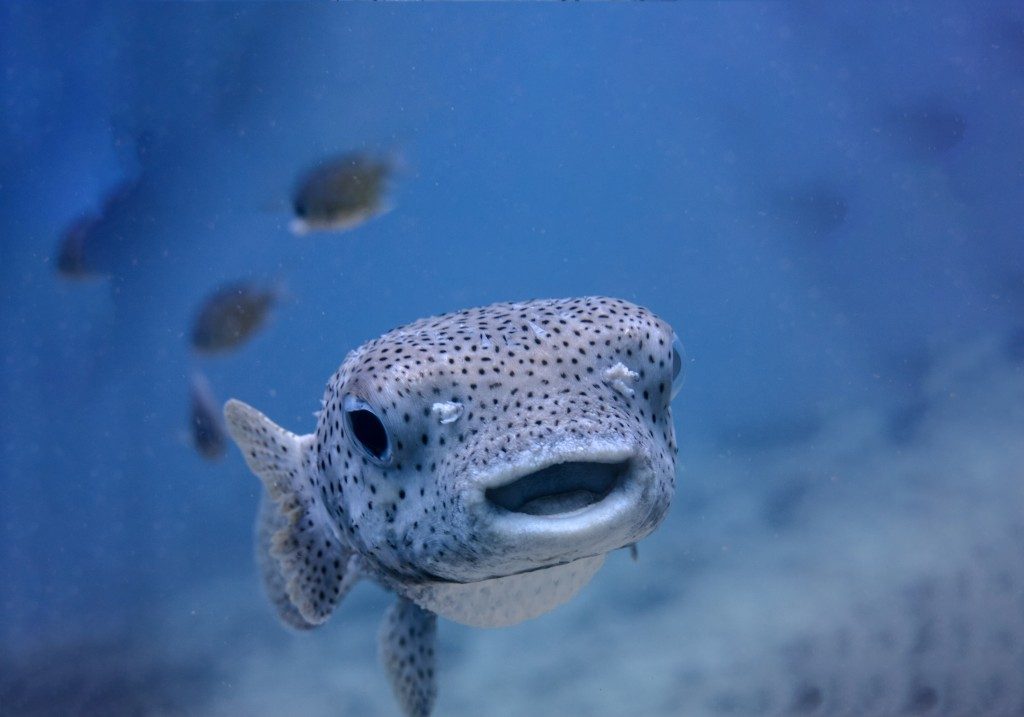 I was accosted recently on the Staten Island Ferry by a large fish.

Well, not exactly. It was actually a large photograph of a fish, on a poster carrying the legend: “I’m ME, not MEAT. See the individual. Go vegan.”

Yes, “People for the Ethical Treatment of Animals,” or PETA, has taken its efforts to the high seas. And, although some of the other animals featured on similar posters in the “I’m ME” campaign elsewhere are not particularly charming — it’s hard to make a cow or chicken look friendly — the fish whose gaze met mine as I took a seat on the boat and looked to my right was decidedly endearing.

Because he (she?) was smiling.

Or appeared to be. That’s because the sea creatures Hashem created include not just astoundingly colorful and morphologically remarkable species but some that have what strike humans as expressive, almost human, faces. Some look angry, others perplexed; others, like the one on the poster, happy, friendly.

None of those faces, though, in fact reflects any of those human traits, any more than a smiley-face sticker means the sticker is happy. We might be able to tell when a dog is pleased, but when we imagine animals expressing truly human emotions, we are unconsciously anthropomorphizing them — attributing quintessentially human traits to creatures lacking them. There are photographs of “smiling” sharks too.

Of course, trying to convince people that, as PETA’s founder and president Ingrid Newkirk once famously put it, “A rat is a pig is a dog is a boy,” is the group’s raison d’être.

It even went so far, in 2003, to promote what it called its “Holocaust on Your Plate” campaign, comparing the meat processing industry to Churban Europa. The traveling exhibit juxtaposed World War II death camp photographs with scenes in animal slaughter facilities.

Emaciated men were shown next to a gaggle of chickens; pigs behind bars, beside starving children behind barbed wire; mounds of human remains beside mounds of cow carcasses. In one panel, above the legend “Baby Butchers,” mothers and children in striped garb were shown staring through the barbed wire of a concentration camp; alongside them, a similar shot of caged… piglets.

Ms. Newkirk once commented that “Six million Jews died in concentration camps, but six billion broiler chickens will die this year in slaughterhouses.” Try wrapping a normal brain around that comparison.

A half-hearted “apology” eventually came, but only for the “pain” the exhibit may have caused. Ms. Newkirk expressed her surprise at the negative reaction. She had “truly believed,” she wrote, “that a large segment of the Jewish community would support” the exhibit, and was “bowled over by the negative reception.” Disturbingly, she laid responsibility for the ill-advised campaign on “PETA staff [who] were Jewish.” Ah, the Jews.

A longtime and still employed slogan of the group, in fact, is “Meat is Murder.” But it’s not. Meat is food. At least since the Mabul, the Torah not only permits meat-eating, it encourages it on Shabbos and Yamim Tovim as a means of enjoying and hence showing honor to holy times.

Few if any religious cultures are as concerned with animals as our mesorah. There is a halachic prohibition of tzaar baalei chaim.

And in actual practice, observant Jews are exquisitely sensitive to animal well-being. I recall as a young boy how my father scooped two injured birds from a street and brought them home to care for them. In my own home, even insects are captured and released rather than killed. (I won’t subject readers again to the menagerie of pets: the goat, iguana, tarantula and assortment of rodents the Shafran family has hosted. Sorry, guess I just did.) I am careful, as per the Talmud’s exhortation regarding animals, to feed my own tropical fish before I sit down myself to dinner.

But the Torah is clear that animals are for human use. We can hold them captive, we can work them and we can eat them. We can, indeed must, when there is a Beis Hamikdash, bring them as korbanos.

The “PETA Principle,” paralleling animals with humans, subtly lies at the root of much that is wrong with our world. But humans alone make moral choices; animals do not. And conflating the two worlds shows disdain for the specialness of the human being.

None of them, though, is a boy.