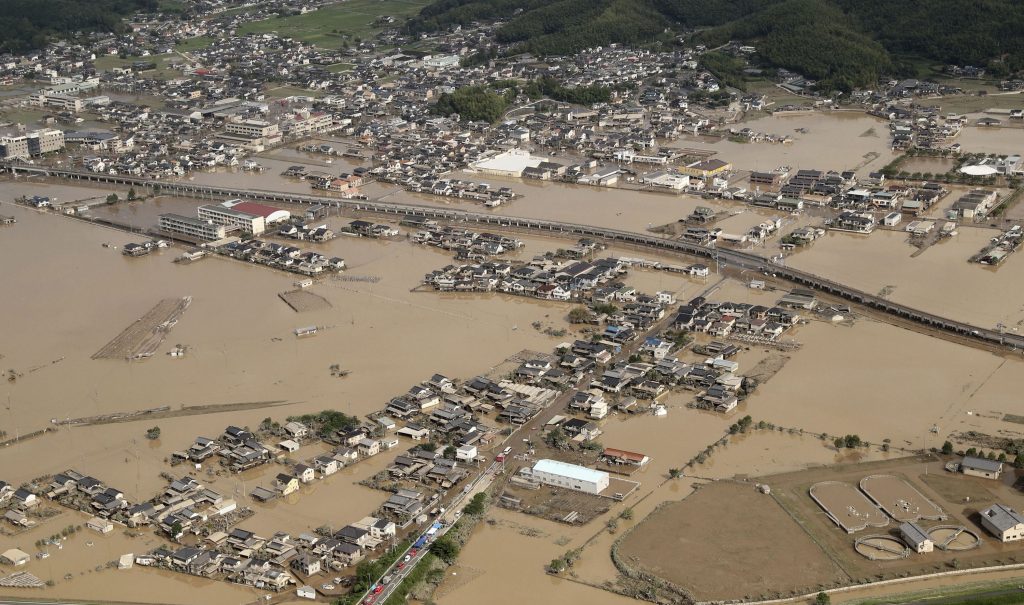 Rescuers were hard at work searching for dozens still missing in southwestern Japan on Monday after heavy rains that left residents returning to their homes speechless and unsure where to start the recovery and cleanup due to the extent of damage from flooding and mudslides.

At least 100 people died or are presumed dead, with more than 60 still unaccounted for, most of them in the hardest-hit Hiroshima area.

The assessment of casualties has been difficult because of the widespread area affected by the rainfall, flooding and landslides since late last week. Authorities warned that landslides could strike even after rain subsides as the calamity shaped up to be potentially the worst in decades.

Some homes were smashed. Others were tilting precariously. Rivers overflowed, turning towns into lakes, leaving dozens of people stranded on rooftops. Military paddle boats and helicopters have brought people to the ground.

Chief Cabinet Secretary Yoshihide Suga said Monday that 87 people were confirmed dead and 13 others were without vital signs when they were found.

Prime Minsiter Shinzo Abe said the government has expanded the search and rescue effort, dispatching 73,000 troops and emergency workers. “The rescue teams are doing their utmost.”

In large parts of Hiroshima, water streamed through a residential area, strewn with fallen telephone poles, uprooted trees and mud, over the weekend.

The Japan Meteorological Agency said three hours of rainfall in one area in Kochi prefecture reached an accumulated 10.4 inches (over 26 cm), the highest since such records started in 1976.

The Japanese government set up an emergency taskforce over the weekend and has sent troops, firefighters, police and other disaster relief personnel. People have also taken to social media to plead for help.

Okayama Prefecture, south of Hiroshima, said in a statement that five people had died, seven were missing and 11 were injured, at least one of them seriously. Nine homes were destroyed, dozens more were damaged, while more than 500 were flooded.