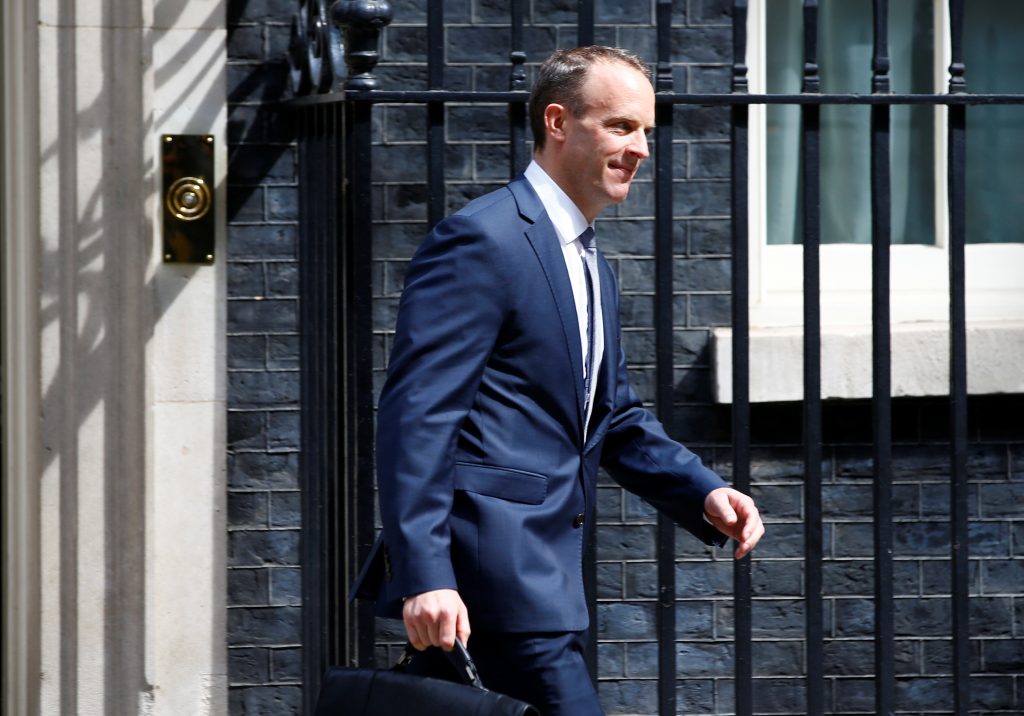 Brexit Secretary David Davis said on Monday he had resigned over “dangerous” British government plans for leaving the European Union in a blow to Prime Minister Theresa May that could complicate already fraught Brexit negotiations.

Davis, who campaigned for Brexit in Britain’s 2016 referendum, said that a hard-won agreement with her Cabinet team of ministers had given “too much away, too easily” to EU negotiators, who, he feared, would simply ask for more.

His late-night departure, followed by one other minister in the Brexit department, raises the stakes for May, who was buoyed on Friday after thrashing out a deal with her Cabinet to keep the closest possible trading ties with the EU.

Many euroskeptics have expressed anger over the agreed negotiating stance, calling it a betrayal of her promise for a clean break with the bloc that has raised the prospect that some could try to unseat her.

But by appointing Brexit campaigner Dominic Raab as Davis’s replacement, May might hope to quell some of that anger.

Sterling rallied, as traders bet Davis’s resignation would not endanger May and instead focused on the newly announced deal that markets believe makes a “soft Brexit” more likely.

Davis’s resignation may also further disrupt Brexit talks, with fewer than nine months before Britain leaves and just over three before the EU says it wants a deal that will mark Britain’s biggest foreign- and trade-policy shift in decades.

Guy Verhofstadt, the European Parliament’s chief Brexit coordinator, said he had enjoyed working with Davis and that he hoped Britain would unite “around a position to conclude a broad Association Agreement with the EU.”

Davis said he feared the EU would “take what we have offered already and then demand some more. That has been their practice throughout the last year and I fear, in fact, if anything, this is just the start.”

“It seems to me we are giving too much away, too easily, and that is a dangerous strategy at this time,” he told BBC radio.

Denying that he wanted to unseat the prime minister, he said he would now “argue for being as firm as possible.”

“Perhaps, one side effect of my departure might be to put a little pressure on the government not to make any other concessions and I will keep arguing to say there is a better way to do it than this.”

In a letter to May, Davis said he was not willing to be “a reluctant conscript” to her negotiating stance, which would see Britain mirror EU rules and regulations.

PM May replied to his letter saying she did not agree “with your characterization of the policy we agreed at Cabinet on Friday.” She thanked him for his work.

In a move further angering Conservative Party eurosceptics, Steve Baker, a minister who worked for Davis, also quit. For many Brexit campaigners, Baker’s government role gave them faith in the process.

Another Brexit department minister, Suella Braverman, had not resigned, a government official said.

After the hours-long meeting at Chequers, May seemed to have persuaded the most vocal Brexit campaigners in the Cabinet, including Davis, to back her plan to press for “a free-trade area for goods” with the EU and maintain close trade ties.

It won the backing of one other prominent Brexit campaigner. Michael Gove, PM May’s environment minister, said on Sunday that while the agreed negotiating stance was not perfect, he believed it delivered on handing back control to Britain.

The so-called peace deal raised hopes that Britain could finally move on with all-but-stalled talks with the EU, which has yet to definitively say whether they will accept May’s plan.

But Davis had expressed his unease over a compromise plan right up until the eve of the meeting, writing a letter to May describing her proposal to ease trade and give Britain more freedom to set tariffs as “unworkable.”

Davis has form on resigning if he disagrees with his party. In 2008, when the Conservatives were not in government, Davis quit as an MP to raise the profile of a debate over what he saw as the erosion of civil liberties.

Their complaints raise a question mark over whether May can win backing in Parliament for her plans if any deal with the EU is agreed later this year, and some suggest several of them could try to trigger a leadership contest against her.

She will face them at a meeting of the party later on Monday. The government is trying to convince lawmakers to back the agreed stance, inviting them, including those from the opposition Labour Party, to briefings on the plan.

But Jacob Rees-Mogg, the leader of a Conservative group of Brexit supporters, said Davis’s resignation proved that their concerns were well founded and signaled that he would not vote for May’s plan if it came to a vote in Parliament.

“It is crucially important as it shows how well founded concerns over the Chequers conclusions are,” he told Reuters. “If the Brexit Secretary could not support them they cannot genuinely be delivering Brexit.”