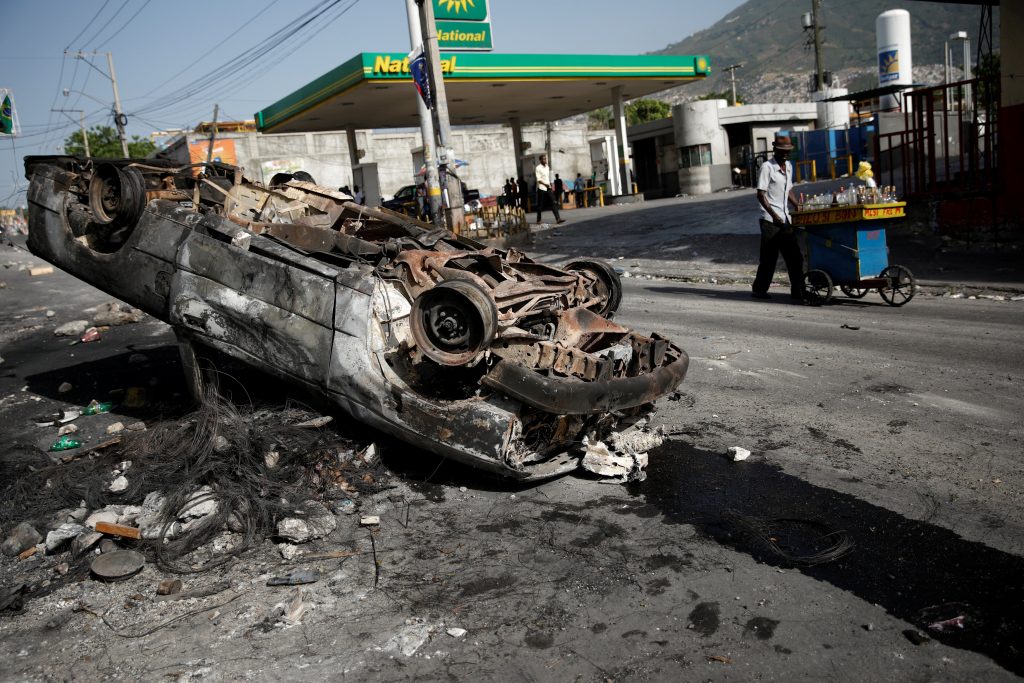 The bulletin was short and to the point. “Embassy personnel are still under a Shelter in Place order,” the dispatch read. “Do not attempt to travel at this time.”

The missive, sent to all American State Department employees in Haiti, came as a crisis unfolded in Port-au-Prince.

The chaos started Friday, when the Haitian government announced its plan to raise prices on gasoline, diesel and kerosene. The proposal would have nearly doubled the cost of fuel. The hike was prompted by the International Monetary Fund, which pushed Haitian officials to reduce government subsidies for fuel. Officials also agreed to increase social services spending, improve infrastructure and do a better job of collecting taxes.

In response, many Haitians rioted. Activists set up flaming roadblocks, bringing travel around the city to a stand-still. Looters raided supermarkets and other stores. Others targeted hotels and businesses, according to Reuters. In a report, they wrote that the capital was been “paralyzed.” At least seven people were killed.

On Saturday, about 120 Americans and 100 Haitians were forced to hole up in the Oasis hotel after demonstrators tried to set the building alight and rush past security. One guest, Stacy Librandi Bourne, explained to CNN what she was experiencing. It’s “a little bit more calm now,” she said. “There’s still a lot rioting, things like that going on, but I think it’s possible that right now some peace might be restored because of the most recent announcement by the prime minister, that he was going to delay things, the price on the gas.”

An Associated Press reporter reported a similar scene at a Best Western in the wealthy neighborhood of Petion-Ville. “Guests were forced to remain inside as rocks were hurled through windows around 10 a.m. local time,” according to the Associated Press. “Security manned the building, but rioters shattered the main entrance before moving to another hotel.”

“The poor people want to be able to eat,” one masked protester told Reuters. “I want to tell [President] Jovenel [Moise] that Haiti is not for him and his family. Haiti is for every Haitian. He needs to leave the country, and leave the country to us so we can live.”

The government has since backed away from the proposed price increase. On Saturday, Moise urged protesters to “go home.”

But that wasn’t enough to calm the angry capital. Several airlines, including American Airlines, Delta and Jet Blue, have cancelled most flights to Port-au-Prince.

That’s left dozens of Americans stuck. A youth group from Bradenton, Florida, was stopped at a roadblock on their way to the Port-au-Prince airport. Executive Pastor Dewayne McFarlin told Reuters that armed men stopped the caravan of teenagers, demanding payment in exchange for safe passage.

McFarlin and his team managed to talk their way through, he said. But just a few miles later, they came upon another group of armed protesters burning tires. “They weren’t government or police,” McFarlin said. “Just people taking advantage of the situation.”

McFarlin and his group returned to Neply. He says the youth group probably won’t leave the area until Monday.

According to local news reports, several other church groups are in a similar situation. One member of the Chapin United Methodist Church in South Carolina posted online that the organization’s mission team is “safe but stranded.”