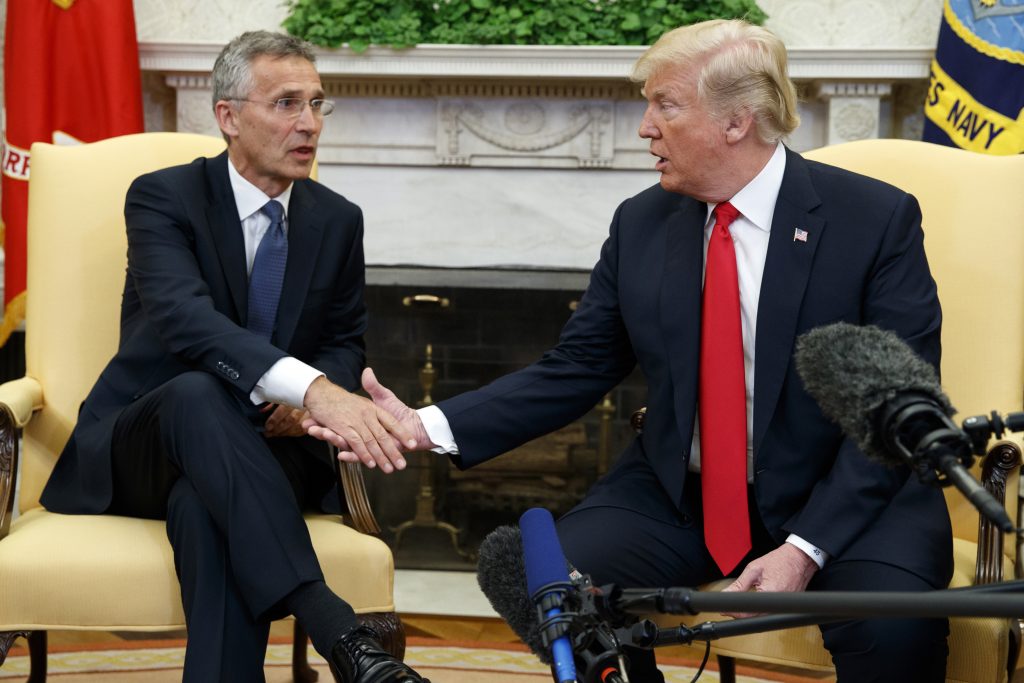 European leaders say they no longer have any illusions about Donald Trump as they welcome the U.S. president at a NATO summit this week, but they fear his “America first” agenda may force a moment of reckoning that works to no-one’s benefit.

After searching for stability and familiarity in U.S. foreign policy in Mr. Trump’s first year in office, America’s friends in Europe have come to accept the president as an unpredictable political insurgent. But that does not make it any easier to see their own priorities undermined.

Germany’s Foreign Minister Heiko Maas warned in a recent speech that “old pillars of reliability are crumbling,” in a veiled reference to the U.S. withdrawal from the 2015 Iran nuclear deal to tariffs on EU metals exports and the threat of more to come on cars.

On NATO’s old foe Russia, the administration has sent mixed messages by intensifying a U.S. military build-up in Europe while railing against fellow NATO members on defense spending and failing to coordinate on new sanctions on Moscow in 2017.

The U.S. president, the de facto leader of the nearly 70-year-old North Atlantic Treaty Organization, has indicated what his message will be at the two-day meeting from Wednesday: other governments must dramatically step up military spending and lower import tariffs.

“I’m going to tell NATO: You’ve got to start paying your bills. The United States is not going to take care of everything,” Mr. Trump told a rally last week, adding: “They kill us on trade.”

U.S. officials and politicians regularly say Washington spends 70 percent of its defense budget on NATO, a claim that is flatly denied in Europe. One senior EU official said the number is more like 15 percent. Like many of the officials and diplomats quoted for this story, he asked not to be named because he was not authorized to speak on the record.

A disastrous NATO summit could provide even worse optics than the divisive Group of Seven meeting in June, especially if a scheduled meeting with Russia’s Vladimir Putin in Helsinki on July 16 is more convivial, NATO diplomats said.

Wess Mitchell, assistant U.S. secretary of state for European affairs, told diplomats and NATO officials in a recent speech in Brussels that Mr. Trump was taking a new approach to problems that have festered for years, such as the Middle East peace process, even if it means going it alone.

“In the actions we take, we are hoping to spur a multilateral response to address some of the world’s toughest challenges,” Mitchell said.

He was echoing private comments made earlier to senior EU diplomats in Washington by Fiona Hill, a top advisor at the U.S. National Security Council, which were described to Reuters. Hill sought to place Mr. Trump’s policy decisions into a coherent whole, they said.

“It came as shock. We realized Mr. Trump cares little for the coordinated U.S.-EU foreign policy of the past,” said one senior diplomat present. “We are stuck without U.S. leadership.”

At a reception in June celebrating 100 years of American and European partnership in Brussels, Washington’s top diplomat to the European Union, Adam Shub, sought to highlight common ground, even on issues such as trade and Iran. The gesture met with muttered disagreement from EU diplomats in the room.

Asked about transatlantic tensions, NATO Secretary-General Jens Stoltenberg has cited the 1956 Suez Crisis and the 2003 Iraq war as examples of policy disagreements that have been overcome.

EU officials say Mr. Trump appears uninterested in solutions, however. They say he ignored top-level talks between EU envoys and U.S. trade and State Department officials this year to avoid metal tariffs and keep Washington in the Iran deal.

On defense, Europe and Canada have tried to show they are responding to Mr. Trump’s demands. Defense budgets in European NATO members, Canada and Turkey are expected to rise by almost 4 percent in 2018, a nearly $90 billion cumulative increase since 2015.

That may not be enough to keep Mr. Trump from raising the stakes again next week, a senior U.S. defense official said recently.

“There is a better-than 50-50 chance that the president will disrupt the NATO summit, probably by complaining again that others aren’t carrying their fair share of the burden, and possibly by threatening to withdraw if they don’t step up on his terms,” the official told Reuters.

Two senior NATO diplomats told Reuters they are prepared for a worst-case scenario that Mr. Trump would announce a freeze on U.S. military exercises or withdraw troops from the Baltics in a gesture to Putin.

One senior U.S. State Department official said Mr. Trump’s foreign policy closely hews to Republican thinking in Washington and that tensions had been high for some time.

The official added that despite the current strains, the administration “deeply values this relationship.”

“These are our closest allies and we really appreciate their support. There has been this tension, which has been a long-running factor … but I’m pretty positive on the relationship overall,” the State Department official said.

Mr. Trump’s May 8 decision to pull out of the Iran accord was a severe setback that has led to talk among EU officials of an “existential moment” in European diplomacy.

They say it also shows that EU efforts to develop a relationship with the White House, including high-profile visits by the French President Emmanuel Macron and German Chancellor Angela Merkel, have largely failed.

That leaves the EU seeking other alliances, including closer ties with Japan and help from Moscow and Beijing to keep money connected to the nuclear deal flowing to Tehran.

“We used to roll our eyes at Mr. Trump’s policies but now we are seeing the craziness becoming strategic,” another senior EU diplomat who was at the Hill meeting said. “We now have to seek out all kinds of partners to further our goals.”