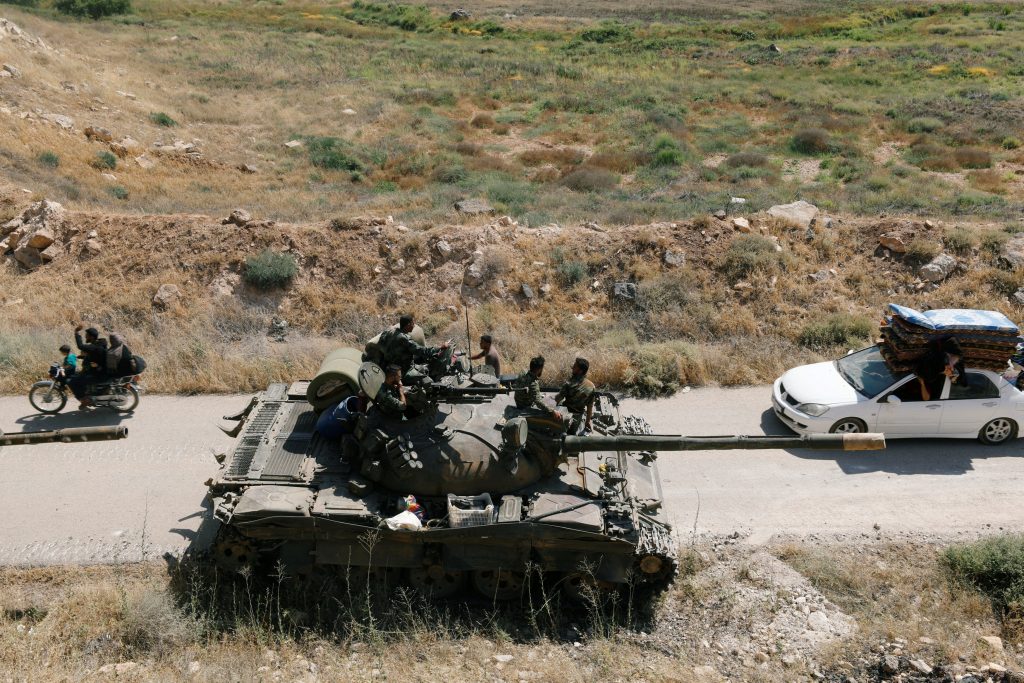 As Syrian government forces press on with a furious offensive against rebel-held areas in the country’s south, Israel is quietly acknowledging that President Bashar Assad’s forces will soon be on its doorstep, laying down red lines for postwar relations with the Syrian leader.

Israel’s main concern is to keep archrival Iran, an Assad ally, as far away from its border as possible — along with its proxy, the Lebanese militia Hezbollah.

“Our demand is that the Iranian forces will go out or withdraw from Syria as a whole, and in it specifically southwest Syria,” said a senior Israeli military official.

It is a turnaround from a few years ago, when Israeli leaders were publicly predicting Assad’s overthrow and some voices even mused about peace with a future democratic Syria.

While carefully refusing to take sides in the Syrian civil war, Israel offered humanitarian assistance to rebels, and it has made a public show of taking in several thousand wounded Syrians for medical treatment.

But there is a sense now in Israel, as in parts of the West, that despite Assad’s vicious conduct of the war — with hundreds of thousands killed and millions forced from their homes — his survival may be a less bad outcome than a takeover of Syria by Islamic terrorists who emerged over time as his most potent rivals.

Israeli leaders have sent a series of messages making clear that they expect Assad and his Iranian-backed allies to honor a decades-old agreement that sets out a demilitarized zone along the frontier and limits the number of forces each side can deploy within 15 miles of the zone.

“We have a Separation of Forces Agreement with Syria from 1974,” Prime Minister Binyamin Netanyahu declared last week. “This is the guiding principle. We will adhere to it very strictly and so must others, everyone.”

The agreement was signed a year after an Arab-Israeli war in which Syrian forces failed to retake a large part of the Golan Heights area seized by Israel in 1967.

The strategic highland has since been annexed by Israel, bringing some IDF troops as well as settlements to within a few dozen miles of Damascus. Although Syria has long demanded the area back — and no countries recognize Israel’s annexation — the border has mostly been quiet for decades.

Israel and Syria are believed to have come close to a land-for-peace deal in the past, but today the chaos in Syria is widely seen as having justified Israel’s continued hold on the Golan.

The agreement was adhered to generally until the Syria war. But Israel has looked the other way amid minor violations of the agreement throughout the fighting — understanding that it would be hard to enforce given the numerous forces active in the area. But as Assad consolidates his gains, Israel wants the agreement strictly enforced once more.

The Israeli military official, speaking on condition of anonymity under briefing guidelines, said that while there is no love lost for Assad, the Israeli thinking recognizes the emerging reality.

Stephane Cohen, a former Israeli liaison officer to U.N. observers in the Golan, said Syria is expected to honor the 1974 agreement, as it did in the past. “The problem is what that comes with now, which is Iran and Hezbollah and other Shiite proxies. That’s the issue,” he said.

One complicating factor is that the U.N. peacekeepers have been forced to abandon their positions during the fighting and would need to return to monitor the truce.

Israel considers Iran to be its greatest threat, citing repeated Iranian calls for Israel’s destruction, Iran’s support for Hezbollah and other hostile terror groups and its development of long-range missiles.

Although Israel has refrained from taking sides in the Syrian war, it has been active in the skies over Syria. It has acknowledged carrying out dozens of airstrikes on suspected arms shipments bound for Hezbollah and is widely believed to have attacked a series of Iranian targets in recent months.

A turning point came in February, when Israel says an armed Iranian drone entered its airspace. Israel shot down the drone, then struck Iranian targets deep in Syria before one of its warplanes was downed.

Then, in early May, Israel attacked what it said was dozens of Iranian targets in Syria in response to Iranian rocket fire aimed at Israel. The rocket fire was retaliation for earlier Israeli strikes.

Since then, Israel has repeatedly said it will not allow Iran, or its Shiite proxies, to establish a permanent presence in postwar Syria. The Israeli military official said the concern is that Iran will use these forces to launch a low-level “war of attrition” with Israel.

A key player could be Russia, which also sent forces into Syria to back Assad. Israel announced Thursday that Netanyahu will travel to Russia this week to meet with President Vladimir Putin, for what is expected to be the latest in a series of discussions about Syria.

For several years, Israel and Russia have maintained a special hotline to prevent their air forces from clashing in the skies over Syria. Israeli officials say the system has worked well.

In new fighting Thursday, Syrian and Russian forces launched a wave of air strikes against rebel-held areas in the southwest and pushed into a major town, resuming a wide-scale offensive after negotiations between Russia and the rebels collapsed.

The government’s advance in the southern Deraa province, which began on June 19, has captured wide areas and forced an estimated 330,000 people to flee their homes.

Opposition activists say scores of civilians have been killed and tens of thousands displaced.

The Britain-based Syrian Observatory for Human Rights reported some 600 airstrikes in Deraa province.

State news agency SANA said Syrian troops entered the southern town of Saida after intense clashes with rebels. The Observatory said that with the capture of Saida, that would leave Syrian troops a few miles from the Naseeb border crossing with Jordan, a key goal.

The U.N. Security Council on Thursday failed to agree on any response to the escalating fighting during emergency closed-door consultations.