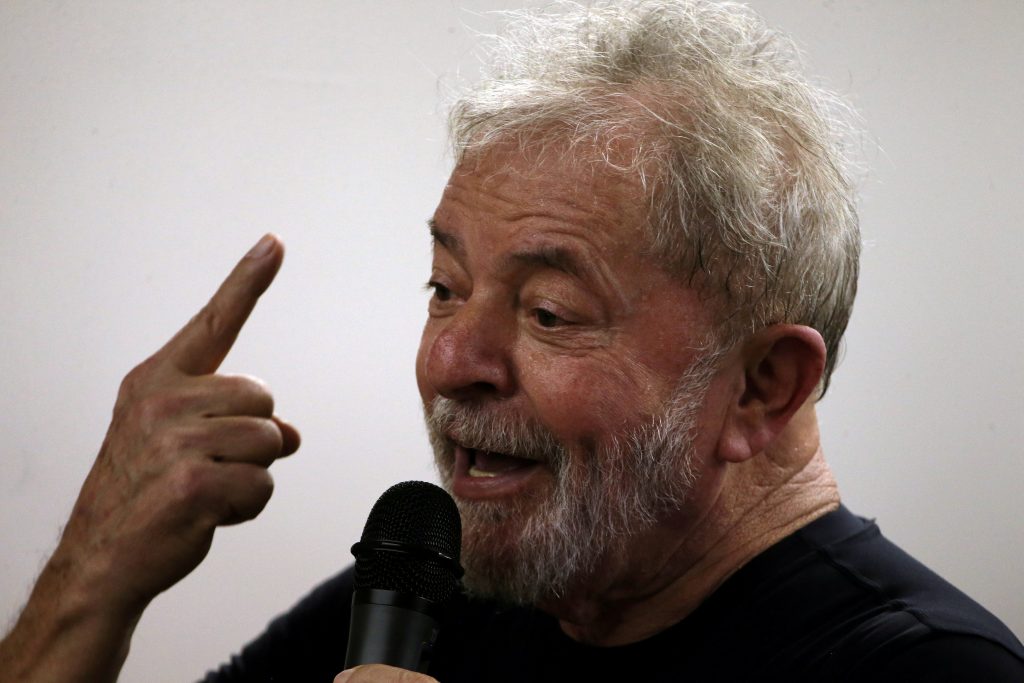 Judge Rogerio Favreto of the Fourth Federal Regional Tribunal said da Silva must be freed within the hour.

It was unclear if police would comply with that decision. The judge in charge of da Silva’s case at the regional court earlier reversed Favreto’s first release order, and two legal analysts said that order superseded Favreto’s.

Also complicating matters is that typically the judge who initially convicted da Silva would be the one to relay the order to police and that judge told police to hold off.

Da Silva began serving a 12-year sentence on a corruption conviction in April at the federal police headquarters in the southeastern city of Curitiba. He denies wrongdoing, and his conviction and jailing has divided Brazilians.

In the hours after the initial decision to free da Silva was published, a few hundred supporters of the former president rushed to the police headquarters Curitiba, waving flags with a drawing of his face and shouting, “Free Lula!” The atmosphere was festive and remained so even after the decision was reversed.

Da Silva’s lawyers have argued that he should not have been jailed until all his appeals were exhausted, and they have filed several petitions for his release that have so far been rejected. Early Sunday, the duty judge at the Fourth Federal Regional Tribunal, Favreto, ordered his release.

Favreto said incarceration had denied da Silva two fundamental rights: both his liberty as a private citizen while he awaits a final appeals court decision and his ability to effectively run in October’s president election. Da Silva has repeatedly said he remains a candidate for re-election, and he is leading the polls.

But the judge who originally convicted da Silva, Judge Sergio Moro, responded by ordering police to hold off on the release order.

Favreto responded by ordering police to act on his order.

However, Judge Joao Pedro Gebran Neto, who is the judge handling da Silva’s case at the regional federal court, stepped in and ordered da Silva be kept in jail.

Maristela Basso, a professor of international and comparative law at the University of Sao Paulo, said Favreto’s decision appeared “more political than judicial,” but could raise the pressure on the Supreme Court to free da Silva. There is a petition asking for da Silva’s release pending at the country’s highest court, which is currently in recess.

Last year, Moro convicted da Silva of trading favors with a construction company in exchange for the promise of a beachfront apartment. That conviction was upheld by an appeals court in January. The former president is also facing several other corruption charges.