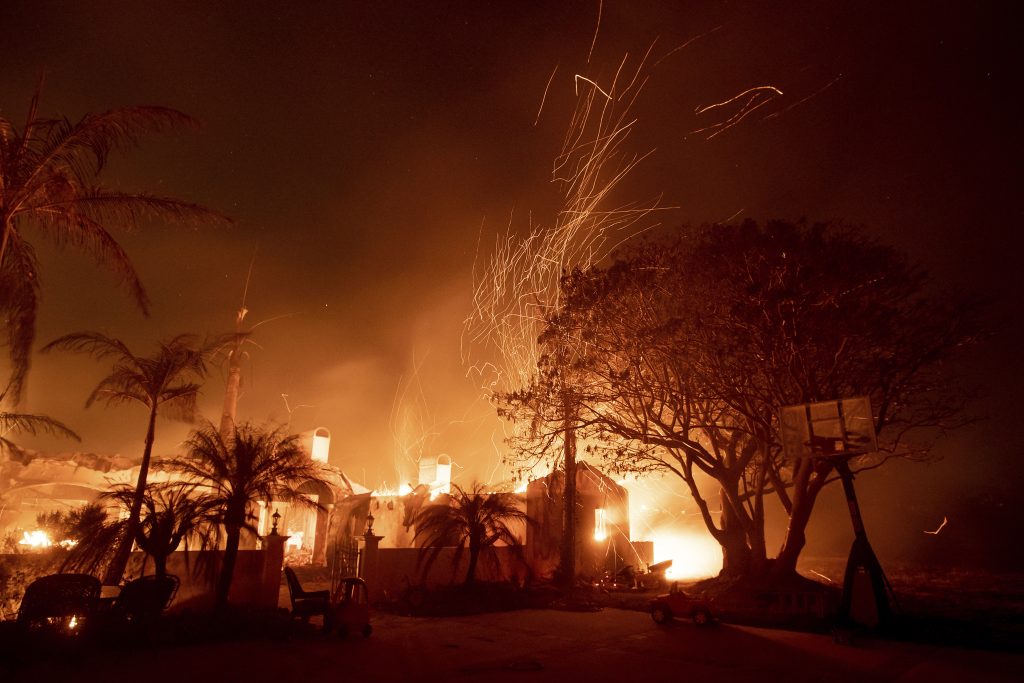 Firefighters toiled in stifling heat Saturday on the lines of destructive wildfires across the U.S. West, making progress against some blazes while struggling to tame others that have forced evacuations of hundreds of homes.

In heat-stricken Southern California, powerful winds that sent an overnight inferno hopscotching through the Santa Barbara County community of Goleta vanished in the morning, allowing firefighters to extinguish smoldering ruins of an estimated 20 structures, including homes.

“It’s really given us a good opportunity to get in there and get some work done,” said county fire Capt. Dave Zaniboni.

The fire’s spread was stopped at about 100 acres or less and teams were working on an accurate tally of damage in the neighborhood, where some houses were in ruins while homes next door were intact.

Elsewhere in Southern California, firefighters increased containment of a central San Diego County fire that rapidly spread over 400 acres, destroyed 18 structures and damaged eight, and a wildfire in the San Bernardino National Forest was holding at 1.5 square miles and forced evacuation of about 700 homes in the mountain community of Forest Falls.

The Southern California fires erupted Friday as strong high pressure over the West spawned an epic heat wave that saw parts of Los Angeles broil in temperatures up to 117 degrees. There was little relief overnight.

“Temperatures at 8 a.m. were ridiculously over 100 degrees” in foothills near Forest Falls and many inland valleys, the National Weather Service said.

Forecasters said the region’s siege of heat would gradually ease through the weekend, but the unstable air mass unleashed downpours that triggered flash-flood warnings for the mountains northeast of Los Angeles.

Further up north and just south of the California-Oregon border, the 34-square-mile Klamathon Fire in rural Siskiyou County was just 5 percent contained. The body of a resident was found Friday in the ruins of a home, among 15 destroyed structures tallied so far.

Authorities described “extreme fire behavior with movement in multiple directions,” with threats to the California communities of Hornbrook and Hilt as well as Colestin, Oregon. Ray Haupt, chairman of the county Board of Supervisors, said losses included homes and livestock.

In Utah, authorities allowed the return of some residents who fled a wildfire near a popular fishing lake 80 miles southeast of Salt Lake City. The blaze has burned about 75 square miles and destroyed 90 structures, including homes, cabins, sheds and garages, since starting Sunday in the mountains.

In the south, crews Saturday contained about 45 percent of a 167-square-mile fire that has destroyed more than 130 homes, while in Rocky Mountain ski country firefighters from 20 states were battling an 8-square-mile wildfire above the Roaring Fork Valley. Commanders said they hoped for one-third containment by late Sunday.

Crews also had 50 percent containment of a southwestern Colorado fire that has blackened 85 square miles north of Durango. Authorities said Saturday that afternoon storms could produce flash floods and mudslides in burn scars.

And in central Colorado’s Park County, crews encircled a third of a spotty fire that forced the Buffalo Creek Wilderness to close. A stretch of busy U.S. Highway 285 between Fairplay and Antero Junction reopened Saturday.