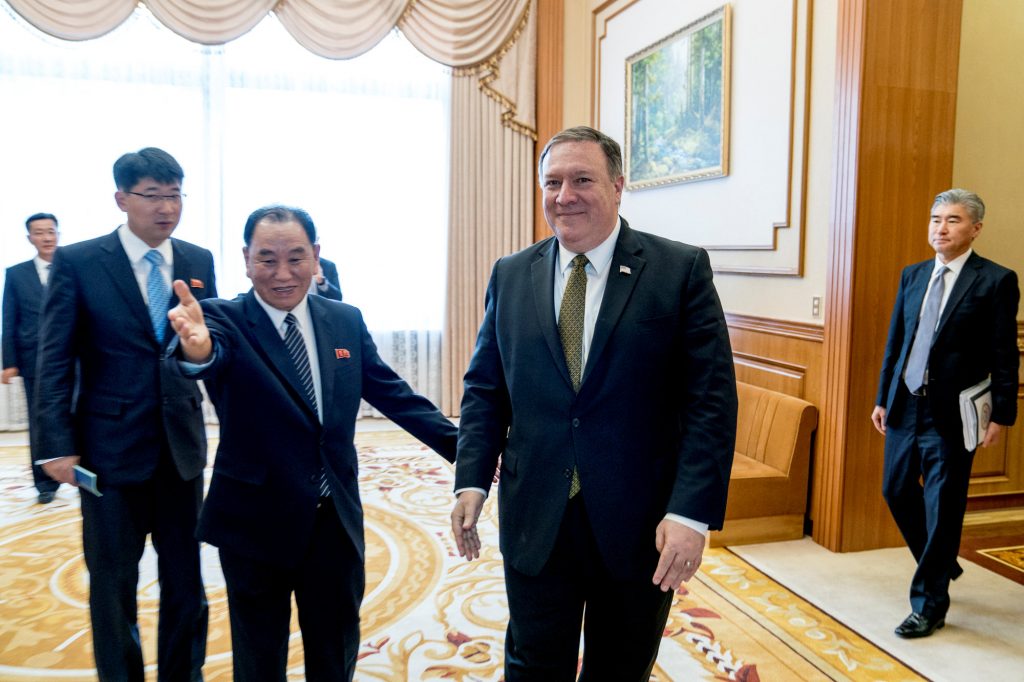 North Korea accused the United States on Saturday of making “gangster-like” demands in talks over its nuclear program, contradicting U.S. Secretary of State Mike Pompeo hours after he left saying the old enemies had made progress on key issues.

During a day and a half of talks in Pyongyang, Pompeo had sought to hammer out details on how to dismantle North Korea’s nuclear programs, including a timeline.

As he departed, he said he had made progress on “almost all of the central issues,” although work remained to be done.

“The U.S. side came up only with its unilateral and gangster-like demand for denuclearization,” a North Korean foreign ministry spokesman said in a statement carried by the official KCNA news agency.

He said Pompeo’s delegation insisted on unilateral complete, verifiable and irreversible denuclearization, known as CVID. He argued instead for both sides to take a series of simultaneous steps as a “shortcut” to a nuclear-free Korean peninsula.

“The high-level talks this time brought us in a dangerous situation where we may be shaken in our unshakable will for denuclearization, rather than consolidating trust between the DPRK and the U.S.”

There was no immediate comment on the KCNA statement from the State Department or the White House. The contrasting comments raised questions over whether North Korea is committed to abandoning the nuclear programs it has developed for decades and has seen as key to its survival.

Trump and Kim pledged at their June 12 summit meeting in Singapore to move toward denuclearization of the Korean peninsula. Trump has declared on Twitter that North Korea no longer poses a nuclear threat.

But Kim has yet to provide details of how or when North Korea might dismantle a weapons program that Trump has vowed will not be allowed to threaten the United States. Also, leaked U.S. intelligence findings concluded North Korea does not intend to completely give up its nuclear program.

On Saturday, Pompeo said he spent “a good deal of time” in the latest talks discussing a denuclearization timeline and the declaration of the North’s nuclear and missile facilities.

“These are complicated issues but we made progress on almost all of the central issues. Some places a great deal of progress, other places there’s still more work to be done,” he said, according to a pool report from U.S. reporters who accompanied him to Pyongyang.

Pompeo said the two sides agreed to hold discussions on July 12 on repatriation, and also discussed “modalities” for destruction of a missile engine testing facility.

KCNA said the North also offered to discuss declaring a formal end to the 1950-53 Korean War marking next month’s anniversary of the armistice agreement, but the U.S. side showed little interest, giving “certain conditions and excuses.”

Nauert said the July 12 meeting, along the border between North and South Korea, would be at working level and involve U.S. Defense Department officials.

Pompeo did not meet Kim as he had done on two previous visits to North Korea this year, but handed over a letter to him from Trump.

A letter from Kim to Trump was also delivered to Pompeo through Kim Yong Chol, a top North Korean party official and former spy agency chief, who was Pompeo’s interlocutor and played a key role in arranging the Singapore summit.

In the letter, Kim Jong Un expressed his “expectation and conviction” that future dialogue would further consolidate the sentiments of good faith between the two leaders, KCNA said.

“We still cherish our good faith in President Trump,” the spokesman said.

Asked about reports based on U.S. intelligence assessments that North Korea had continued to develop its nuclear facilities even while engaging in dialogue, Pompeo said:

“We talked about what the North Koreans are continuing to do and how it’s the case that we can get our arms around achieving what Chairman Kim and President Trump both agreed to, which is the complete denuclearization of North Korea.

“Chairman Kim is … still committed” to that goal, Pompeo said, and he reiterated that Trump was “committed to a brighter future for North Korea.”